Here are some D&D classes fashioned using the system described in this post.  (Incidentally, since that post, I have tweaked Table 9 – Spell Progression Costs.)

These ne'er-do-wells can pass themselves off as fighters, but they are unfettered by notions of honor and bravery.  The 'weasel maneuver' regards the 'fighting withdrawal' and 'retreat' rules specified in the Expert Set.  According to page 24, “In crowded situations, characters or monsters behind a creature attempting to use a fighting withdrawal will prevent this form of defensive movement.”  A knave is able to perform a fighting withdrawal in such situations if a saving throw vs. paralysis is successful.  Also on page 24, “If a creature tries to retreat, the opponent may add +2 to all 'to hit' rolls, and the defender is not allowed to make a return attack.”  With the 'weasel maneuver', a retreating knave who succeeds in a saving throw vs. paralysis is not subject to attack.

This class represents entities that are half-human and half-troll.  What's that?  Humans and trolls are not genetically compatible?  Fine, a wizard did it.  Given its human heritage, a Half-Troll's talons and teeth and not developed sufficiently to act as reliable weapons.  Its tall and lanky frame can accommodate only lose, pliable leather as armor.  I suppose that, for the right price, a properly fitting suit of armor could be made, but maybe the metal prevents regeneration.

The idea for this class came from Pendragon.  Regarding Shapechange, Crabaugh's article states that 'shapechange' has a cost of 50% per hit die of the animal form.   Ravens have a hit die of ¼, but being able to turn into a raven should not be so cheap as a '0.12' modifier.  I think the '0.50' cost should be the minimum.  That being said, the raven is certainly not a normal raven so it might as well have a full hit die worth of hit points – as long as the hit point total does not exceed the hit points of the human form.

Of course, the shapechange alternate form in Crabaugh's article was limited to a “specific, predetermined land-based mammal.”  I think this is too limiting.  Certainly, players are liable to exploit potential forms, but it is easy enough to check such exploitation.  For instance, if a character can shapechange into a venomous snake, the character might try to collect the venom to ensure a never-ending supply of poison.  This is easily thwarted by having collected venom change to saliva as soon as the character returns to human form – and it remains as saliva if and when the character resumes snake form. 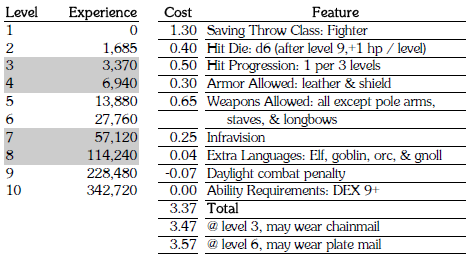 Bummed out because you've been reincarnated as a goblin?  Well, this is for you!  You're welcome.

There's not much to say – it's a goblin.  The combat penalty in daylight is listed as a negative modifier.  I tossed in some extra languages listed as 'Bonus Languages' for goblins in another edition. 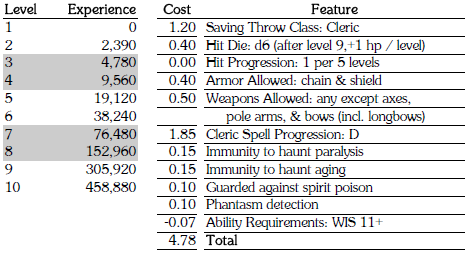 I attempted to think of a class that would use cleric magic, but which wasn't a derivative of the cleric or paladin classes.  I came upon the idea of a class with spell-like powers originating not from gods/Immortals, but from the so-called “spirit realm.”  After all, the Rules Cyclopedia stipulates on page 13 that “sometimes the cleric is serving only his alignment, and has no interest in immortal beings.”  If an alignment, why not the spirit realm?

Given an association with the spirit realm, such a class ought to have features that regard the non-corporeal undead.  The immunities are self-explanatory.  I wanted the class to have some sort of protection against 'spirit poison', but I felt immunity was too much.  So, I created the “guarded” feature.  With this feature, if a spiritualist fails a saving throw against spirit poison, he or she gets another chance to save.  “Phantasm detection” does not work like the other detection features; it works more like a 'Detect' spell than a sense.  A number of times per day equal to half of his or her level, a spiritualist can detect non-corporeal undead within sixty feet for two turns.

Another interesting feature might be for a spiritualist to be treated as twice his or her level when casting the 'Speak with the Dead' spell.

Not surprisingly, this class specializes in combat.  It provides more features than the fighter class, but needs more experience to advance and has significant 'ability requirements'.  Starting at fifth level, a war master may – instead of applying +1 to personal initiative – attempt to apply +1 to group initiative for a round.  The attempt is successful if the war master makes a save vs spells; if failed, the war master does not receive the personal initiative bonus that round.  Starting at sixth level, for a number of times per day equal to half his or her level, a war master may cause a +1 modifier to be applied to enemy morale rolls.  (Alternately, a -1 modifier can be applied to morale rolls for allied NPC combatants.) 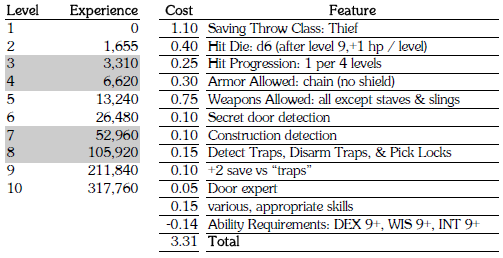 This class is competent with technology as it might exist in a fantasy medieval setting.  For game purposes, this primarily means traps, doors, and other contraptions one might find in a dungeon or other adventure locale.

'Secret door' and 'construction' detection function just as they do with Elves and Dwarves respectfully.

The “save vs traps” feature applies to any saving throw the mechanician attempts against the direct effects of a technological trap (as opposed to magical traps).  For instance, if a trap is sprung that fires poisoned darts at a mechanician, the +2 modifier applies to any saving throw to avoid the darts.  If hit by such a dart, the +2 modifier does not apply to saving throws against the effects of the poison.

“Door Expert” means that the character adds his or her level to his or her strength when attempting to open stuck doors, but not magically stuck doors.  'Doors' in this sense includes portals, gates, and similar items designed to block/permit ingress/egress.

“Various, appropriate skills” refers to 'Engineer' and 'Craft (Tinker)' from the Rules Cyclopedia.  If skill rules are not in effect, just assume that the character is capable of performing tasks related to engineering and/or tinkering.

To be continued?
Posted by perdustin at 10:14 AM