The commander of the Time Corps' Last Resort Division is named Bora and she is one of the Kleibor – an alien race from Pacesetter's STAR ACE® role-playing game.  Bora “looks like a giant, highly intelligent polar bear.”  Just what makes a polar bear look “highly intelligent” is left unstated.  Glasses?  Pocket protector?  Anyway, Bora assigns two missions to the player characters.  First, a Temporal Disaster Wave will “presumably wipe out the Time Corps' existence” in 18.5 SDS hours.  Second, the player characters must cope with a Time Storm by finding “the Parallel, time, and place where this Time Storm erupted, and prevent the storm from starting.”  Also, the player characters should “make whatever repairs [they] can to the Parallels [they] visit along the way.”  Actually, as the text makes apparent later on, preventing the Time Storm also undoes all of its effects.

The Temporal Disaster Wave (or TDW) evidently began when Arabic numerals were introduced to Augustan Rome.  As a result, “Mathematical science explodes. . .[and] the Roman Empire still thrives” until the 21st Century, at least.  A mission team was deployed two days previous.  Since they have not reported, “obviously, they did not succeed.”  So, the player characters must go back in time, tell the first team to desist, and assume their mission.  The send-off for the player characters is rather brusque in keeping with the urgency of the situation; however, they are also insulted as the briefing ends:


She glances at the side door, and it slides open to admit four alien agents.  (Kleibors have innate skills in telekinesis.)  Two 12-foot bears and three 8-foot brown lizards step inside.  They glance at you haughtily, and one asks, “Gees, we aren't teaming up with them are we?”

(I suppose 'Gees' is the diminutive form for the spiritual savior of 8-foot brown lizards.)  I would be inclined to reply with something like:  “Excuse me, I have to go save the Continuum – I hope your penny ante species manages to survive.”  Reptilians can be such jerks. 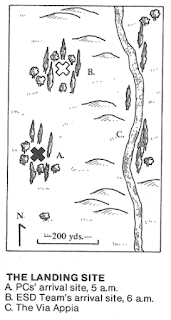 
Whirling helpless in a black, disorienting void, you tumble and careen past countless other writhing, spinning beings.  Some are alien, some humanoid, but all are panic-striken and powerless.  Their screams are deafening, though it is difficult to separate the cries of other victims from the piercing howl of the tempest itself.

Eventually, the player characters find themselves on Parallel A-1023.  Herein lies the likely reason Timestorm™ has not been republished even though the rest of the TIMEMASTER™ catalog is available.  Parallel A-1023 represents the reality of Wabbit Wampage, a board game published by Pacesetter in 1985 and designed by Marc Acres.  You might as well cross-sell if you can.  Presumably, in order to republish Timestorm™, one must also have the Wabbit Wampage license.

Wabbit Wampage simulates a television cartoon with characters like Thugs Bunny.  One of these characters is depicted on the Timestorm™ cover, hand-in-paw with Cleopatra.  The Wabbit Parallel is one of “Violent, senseless mayhem,” as befits a cartoon.  We learn that “creatures on A-1023 never die; they simply get 'whomped,' soon returning to action.”  However, visitors to the Parallel – such as the player characters – remain mortal.  In a mailbox, the player characters find a note from their future selves who have (or will have) mail ordered cartoon chronoscooters from the Acme Company.  Once the letter is read, the cartoon chronoscooters arrive via parachute, which the player characters can use to continue the adventure in ancient Rome.  The letter contains the phrase:  “After a few hair-raising adventures. . .”  Given the puns of Wabbit Wampage, Acres should have used “hare-raising.”

Does this mean there's a Parallel for every game?  Is there a Parallel that consists of a chess (or chaturanga) board and beings that are the equivalent of the pieces?  More importantly, is there a Hungry Hungry Hippos Parallel?

The Temporal Disaster Wave was engineered by “Le Voleur, the infamous, mysterious renegade.”  Le Voleur's scheme was to threaten the existence of the Time Corps, demanding that they release his compatriot renegades from the Prison Parallel in order for him to negate the TDW.  Of course, a threat is only effective if the target is aware of it and Le Voleur has delayed issuing the threat.  This is because Le Velour “doesn't know how quickly the wave is advancing, and he wants to to leave the Corps with as little room to maneuver as possible.”

At the onset of his scheme, Le Voleur sent two henchmen to Al Capone's death and injected him “with a 58th century drug.”  Said drug had the effect of making “Capone appear lifeless, while holding his body in a state of suspended animation.”  The henchmen exhumed Capone the day after was buried and took him to Rome.  There, “Le Voleur revived Capone and cured him of his disease,” although he lacks medical skills.  Le Voleur then convinced Capone “to start up gangster operations” in Augustan Rome.


. . . Capone revelled in the chance to relive his “glory days” in an environment with, as he put it, “no feds and a wide open city.”  He recruited the lowest, most violent scum from the Roman streets, making them “soldiers” or “button men” in his new organization.  With the help of Le Voleur's band of renegades, he imported handguns, automatic weapons, [cars,] and clothing from the American 1920s.  He even received language implants from Le Velour's labs, so his men would look and speak just like “old time” Chicago gangsters.  In six months, Capone had taken over most of Rome's gambling operations.  Soon, his organization would conquer the liquor and slave trades too.

Remember, the Temporal Disaster Wave was started not by firearms or internal combustion engines in ancient Rome, but Arabic numerals.  We learn that the Praetorian Guard “would be willing to put an end to both [Capone] and his band of thugs, but the Emperor won't allow it (for what reason, the soldiers cannot imagine).”  The Emperor's reason is never disclosed.  In the course of the adventure, Capone attempts to double-cross Le Voleur and steal a time machine, but Le Voleur tries to escape, going back in time so as to “cancel the abduction of Al Capone.”  Which means the Temporal Disaster Wave would not have occurred.

Whether or not Le Voleur escapes, the Time Storm brings to Rome “three 4-foot cartoon rabbits” armed with a shotgun and chainsaws.  They appear at the dénouement of the TDW plot.  “Obviously,” we learn, “the wabbits are displaced from another Parallel, and the PCs should (as part of their Time Storm mission) return them to their natural home,” which is the Wabbit Parallel.  Returning the wabbits requires that the player characters defeat them.  The prospect is not easy since – as cartoons – they don't “seem the least bit dampened by. . .wounds.”  In order to conclude the mission successfully, the player characters must deliver the wabbits to Parallel A-1023, where the next adventure in the campaign takes place.

Posted by perdustin at 8:26 PM