Being a Supervillain for Fun and Profit 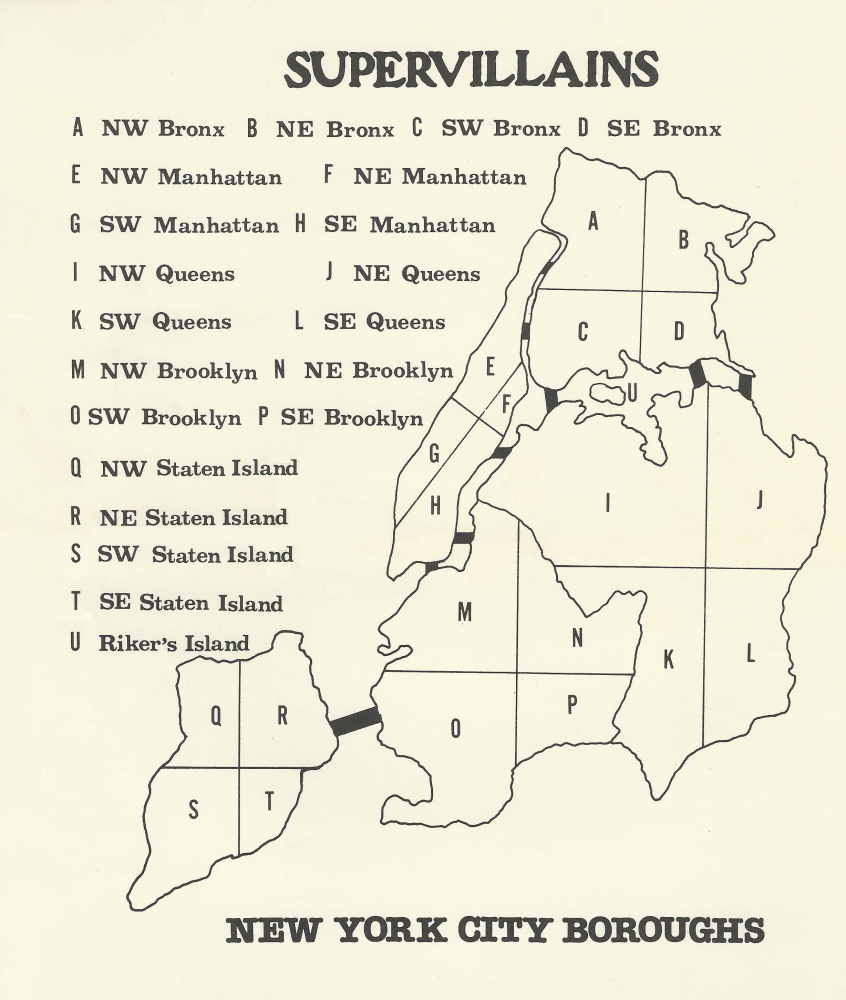 So, you think you’re ready to be a supervillain?  Let’s go over the checklist:


□     Strange powers “beyond those of mortal men”
□     Evil disposition
□     Maniacal laugh
□     Appropriate moniker (such as Doctor Boom, the Mauve
Marauder, Opossum-Man, or the Human Zamboni)
□     A costume that would put a Mexican wrestler to shame

OK, now what? Sure, you can rob a bank or two but that gets old fast (trust me). You need to think long term…assemble an organization…obtain some real estate…generate consistent revenue streams.

Regarding Supervillains, “The object of the Advanced game is...to control as many of the 20 sections of New York City as possible... ”  It's not like world domination or controlling an international diamond syndicate, but at least it's interesting.  Each section represents one-fourth of a borough as indicated on the above map.  The geographic logic (if any) of these sections escapes me; for instance, I would have divided Manhattan into uptown, midtown, and downtown.

Controlling the officials of a section can be accomplished through bribery, extortion, blackmail, or a combination of these.  Rules are provided for bribery.  Non-player characters are assigned an 'integrity level' from one to six.  When attempting a bribe, a player rolls a number of dice based upon the amount of money spent and the integrity level of the character being bribed (as detailed in the chart below).

If the total of the 'bribery dice' is at least six, the bribe will be accepted and “the character the player is attempting to bribe will fulfill his end of the bargain.”  So, for any bribable target, one die may be sufficient for sucess.  If the total is exactly five, “the character the player is attempting to bribe desires more money.”  If the total is less than five, the bribe is unsuccessful.  An unsuccessful bribe might result in the character attacking the would-be briber or calling for help.  (I am uncertain as to what 'help' a stoolie could summon.)

Controlling the criminal element requires a supervillain “to force the resident punk gang into servitude.”  According to page 15:


A supervillain which [sic] attempts to take over a street gang's turf must either kill or beat to unconsciousness at least 30% of the total “51-150” members of the gang.  If this takes places, the punks will “see the light” and will swear their allegiance to the supervillain.  Once the punks have sworn allegiance to a supervillain, they will fight for him (allowing every member to be killed if necessary) to resist any attempt by another supervillain to gain control of that particular section of the city.

However, there is a 1% cumulative chance per day that half of the gang will rebel against the supervillain (with the other half remaining neutral).  Apparently, gangs don't care about money and bribing a gang leader is not feasible.  Given that a mutiny is almost guaranteed within three months time, controlling a gang doesn't seem worthwhile.

Other than its use as a 'victory point', the benefits of controlling a section of the city are not evident.  At the very least, gaining control of a section ought to make it easier to control additional sections.  I suppose it's unreasonable to expect fulsome rules for controlling a city when the entire game is presented in a twenty-four page booklet.  Yet the meager rules Supervillains does provide seem rather odd – control of “punks” through brute force, but no mention of organized crime.