As one might expect from “an exciting game of super human role-playing,” player characters have superpowers – or “Abilities” as the rules refer to them.  A character's Ability is determined by rolling a percentile die and consulting the Ability Chart (sometimes called the Ability Table) and subsequent Ability Descriptions.  There are thirty-three Abilities.  Many of them are standard comic book superhero fare, some are unusual yet not without comic book precedent, and a few are original and...interesting.

Under the Ability Descriptions, each Ability indicates its Area of Effect and the amount of stun and/or kill damage it inflicts (if any).  Abilities that can be used to attack also indicate if said attack is a “Material Attack Form,” which is whether or not the damage “is caused by a tangible object.”  Material Attack Form may not be intuitive; for instance, Heat Control has a Material Attack Form but Sound Control does not.

“A character that possesses the LIVING HAIR ability will have hair that is approximately 10 feet long...The character will have total control over every strand of hair.”  This is obviously based on Marvel Comics' Medusalith Amaquelin Boltagon.  Living Hair can be used in three 'forms' – attack, defense, and movement (using hair to climb a building).  When an Ability has multiple 'forms', only two can be used simultaneously.

Inspired by DC Comics' Wildfire, “The entire body of a character which possesses the LIVING ENERGY ability will be composed of LIVING ENERGY which will be held together only by the special suit that the character wears.”  Should the suit be punctured, an “energy output” explosion occurs.  “This energy output will have a duration of one combat phase, after which the suit will repair itself completely.”  Similarly, Explosive Demolecularization allows a character “to literally blow himself up...[then] his molecules will re-form at the same spot” in the fashion of Marvel Comics' Nitro.

If a character survives a Strong Force attack, there is a possibility that one or more of the character's limbs will become crippled.

Another 'original' Ability is Conversion:  “In accordance with Einstein's Unified Field Theory, a character with the CONVERSION ability may convert an ELECTRICITY, a MAGNETISM, a GRAVITY CONTROL, a RADIOACTIVITY, and/or a STRONG FORCE attack into one another.”

Last but not least (actually, 'least' may be accurate), we have Oxidation/Reduction:

Yeah, without the oxygen it's kind of tough, isn't it?


The rules for determining a character's appearance in the 'advanced' game of Supervillains comprise nearly two of the twenty-four pages of the rule book.  For posterity, I present a set of tables equivalent to those provided in Supervillains.

Characters are either humans, androids, or aliens.  'General Appearance' can be (1) human in all respects, (2) near-human, (3) humanoid, or (4) non-humanoid.  Near-humans and humanoids roll once on Table 1.4 to determine one feature difference and are directed to a subsequent table.  Humanoids may have more extreme differences than near-humans.  Although some results might seem normal, such characters “are not quite human.”

For non-humanoid characters, one roll each is made on Table 1.31 and Table 1.32.  No roll is made on the Feature Difference Table.  Instead, non-humanoids automatically have a 'feature difference' for each of the following:  body size, body build, face, appendages, and skin.


Comic book superhero universes (including original RPG settings) usually have some law enforcement organization that specializes in addressing ‘super-powered’ threats.  Perhaps the most well-known example is Marvel’s S.H.I.E.L.D.  The analogous agency in Supervillains is DAGGER, an acronym for Defense Agency of the General Government, Exceptional Requisites.  (I would have gone with Dangerous Assault Group – General Emergency Response, but whatever.)

“DAGGER agents are traditionally clothed in a red costume with a black dagger superimposed on a white ring symbol on their chests,” the rules state.  Above, I have attempted to render a passable depiction.  What the uniform lacks in subtlety, it makes up for with fascist iconography.

The rulebook states, “DAGGER is a high technology organization, which employs the best scientific minds to be found anywhere in the world.”  Standard equipment for a field agent includes:

Shoot, a fella' could have a pretty good weekend in Vegas with all that stuff.  In addition, “each agent has a special helmet...which transmits impulses from all five of their senses directly to their brain, making it impossible for anyone to take a uniformed DAGGER agent by surprise...”

Experimentation can have various results.  Aliens and characters who don't look human “will always die and be removed from the game.”  For androids, DAGGER has a 50% chance of “gaining the ability to reproduce the mechanism which gave that particular android its ability...and will be able to add this ability as a weapon to their arsenal.”  Additionally, an “android may either be permanently deactivated...or he may be 're-programmed' to become a law and order character.”

For human characters, “there will be a 5% chance that that DAGGER has discovered how to recombine DNA to produce that character's particular appearance, and will be able to 'create' their own law and order character possessing the same abilities as the character experimented on.”  Regardless of DAGGER's success (or lack thereof) with the DNA, a d% is rolled:

Characters who survive and retain their abilities (but not those with the 'double ability' result) are “saved.”  This has nothing to do with finding Jesus, it means that “DAGGER will keep these characters in a state of cryogenic 'sleep'.”  DAGGER will revive these characters “when any type of random destruction becomes necessary, for example...in the event of war.”  Perhaps allowing (possibly insane) supervillains to run rampant sounds like a bad idea.  Of course it does!  That's why “DAGGER has implanted small remote-controlled bombs in the skulls of these characters, so [they] can be destroyed in the event they attempt to do anything other than what they are ordered to do...”

DAGGER's hiring and promotion practices leave much to be desired:


The current structure of the DAGGER heirarchy [sic] allows for one director, up to five commanders, and as many as twenty lieutenants.  These positions are almost exclusively reserved for “those of demonstrated leadership capability,” which means that those agents who hold these positions will almost always have some type of superpowers...  So far, in the agencies [sic] brief existence, only two men have been promoted to the position of DAGGER commanders.  In order for an agent to qualify as a lieutenant, DAGGER will lock the applying agent in a “danger room”, and will throw the deadliest perils available at him.  Examples of these traps are:  raising the floor temperature to 1000 degrees, sending electrical arcs across the room, turning loose several very large and deadly robots, mounting machine guns in the walls, and pumping all of the air out of the room...There is also a test which must be passed in order for a character to become a DAGGER agent, although it is not nearly as difficult as the test to become a lieutenant.  Many agents were rumored to be trying out for the position of DAGGER lieutenant when they simply “disappeared”.  Those who, through quick thinking and courage, manage to “pass” are commissioned as lieutenants and command squads of twenty field agents...

With a law enforcement organization like this, who needs supervillains?


The 'basic' game of Supervillains focuses on combat.  Included in the game is a 'strategic' map (55cm × 42cm) upon which combat is played out.  (See image below.)  The left side is represented in hexes while the right side is represented in squares; the interface between the two sides is a column of “square-hexes.”  These hexes, squares, and square-hexes could collectively be called 'spaces' and the rules do this – but only rarely.  When referring to these spaces the rules usually (and annoyingly) use the phrase “hexes, squares, and square-hexes.”  I'm going to use the term “spaces.”  No dimensions are given for these spaces but they would seem to accommodate the width of a city street.

For the 'basic' game, players are expected to use pre-generated characters – of which 37 are provided.  Character creation is not covered until the 'advanced' rules where the concepts of 'Strength' and 'Dexterity' are explained.

Dexterity is “the overall physical coordination and the quickness of the character.”  It is rated from one to six.  A Dexterity of 1 is described as “BELOW NORMAL HUMAN” while a Dexterity of 6 means “FULL CONTROL OVER ALL BODY MUSCLES.”  A “normal human” has a Dexterity of 2.

(Strength is determined by rolling 1d10.  Dexterity is determined by rolling 1d6.  Perhaps the average of 2d6 – rounding down – would be a better way to calculate Dexterity.  In this way, supervillain Dexterity would tend to be above the level of “normal human,” but extreme values would be less frequent.  Strength could be determined the same way except that if doubles are rolled on the 2d6, an additional 1d6 would be added to the average – to a maximum Strength of 10.)

In Hand-to-Hand combat, “If a hit is scored, the damage will always be one point, regardless of the Strength of the attacker.”  This damage is 'stun' unless using a weapon; however, “Superbeing characters may make the attack either to kill or stun.”  So, a 'Superbeing' with a Strength less than that of a normal human can inflict kill damage even when unarmed.  I guess they fight dirty.

In the 'basic' rules, “The play of the game is organized into Game Turns.”  Just assume that a basic Game Turn does not represent a fixed amount of time, but allows each character to perform movement and an attack.  Later in the rule book, mention is made of something called a “combat phase” which lasts thirty seconds, but does not allow for movement.  How combat phases relate to anything in the game is beyond me.

Although combat occurs in the advanced game, the advanced rules define 'turn' in a different way:  “a turn will represent one day of actual time.”  Of course, by “actual time,” the rules mean time as it passes in the game.  The phrase “game day” would evidently be too confusing.

To determine whether or not an attack succeeds, the attacker and defender compare their respective combat strengths and refer to the Combat Results Table. If attacker and defender have equivalent combat strengths, the attacker must roll six or greater on 1d10 to hit the defender.  The Combat Results Table ranges from attacker/defender odds of 4+:1 (automatic success) to 1:4 (a roll of 10 is needed to succeed).  Combat strength for Hand-to-Hand combat equals Strength plus Dexterity plus applicable modifiers.  Combat strength for ranged combat is Dexterity plus applicable modifiers. 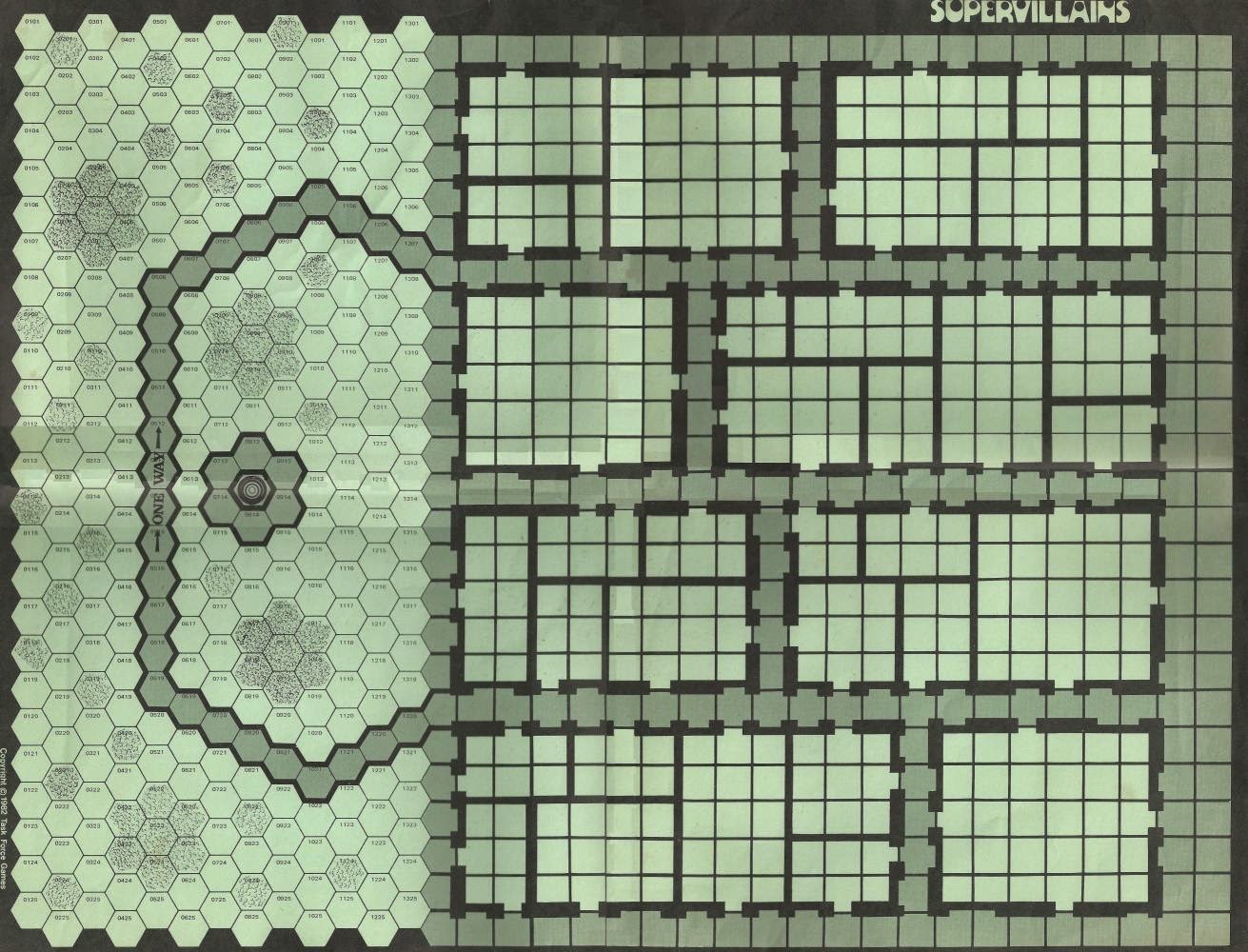 Posted by perdustin at 3:20 PM No comments: