Casting about for my next study after Tabloid! and Pandemonium!, I thought about Everway.  It's not exactly old school, but it is twenty-five years old.  Little did I realize a Kickstarter for a silver anniversary edition is planned for next month by the aptly named The Everway Company.

Rumor has it that WotC required businesses that sold Magic: The Gathering to also sell Everway, forcing Everway into retail channels that did not want to accommodate role-playing games.  A survey included with the game shows the types of establishments WotC thought would carry Everway. 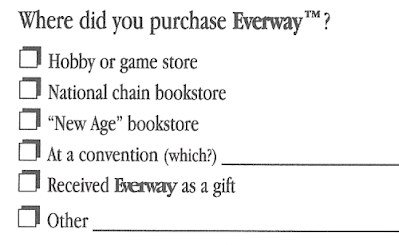 Also included, but not listed on the back of the box, were the aforementioned survey and a plastic tray.  The tray was able to hold all cards included in the game, as well as a set of “companion collector” vision cards (sold separately).  Honestly, the large box didn't need to be so large.  The guide books measure roughly roughly 7" × 9".  The character sheets and maps are 8.5" × 11", but they could have been folded in half for the sake of a more compact box.

Not surprisingly, the company behind Magic: The Gathering made cards an essential part of their Everway role-playing game.  Rather than dice, Everway employs a Fortune Deck to determine the outcome of actions in the game.  Cards from the Fortune Deck have iconography similar to the Major Arcana of the tarot.  (The survey asks, “Do you own tarot cards?”  If so, “How many decks do you own? 1-2, 3-5, 6-10, Over 10”)  Lacking numerical values, interpretation of the cards is necessarily subjective.  Like tarot cards, a Fortune Deck card has both a normal meaning as well as a reversed meaning.  For example, 'The Griffin' card has a normal meaning of “valor” and a reversed meaning of “cowardice.”

Each of the 'source cards' depicts an aspect of the Everway setting with a brief, informative paragraph on the back.  Shown at the beginning of this post is the “Gate” source card.

The 'quest cards' depict aspects of the ready-to-run quest (i.e., introductory adventure) provided in the Gamemastering Guide.  Five of the six cards are of non-player characters from that quest.  This is helpful in showing players what these characters look like.  The backs of the cards indicate the attributes of the characters, convenient for the gamemaster's reference.

The 'vision cards' distinguish Everway from other role-playing games, both then and now.  These cards are instrumental in creating a character as well as recording the character's continuing, in-game story.  Creating player characters begins with the Vision Stage, which requires vision cards.  According to page 67 of the Playing Guide :

You use vision cards to develop your hero's background and identity.  First, look over the vision cards.  Your gamemaster may provide some, as may your fellow players and you may, of course, provide your own.  Select five cards that attract you.  You need not decide right away what these cards will mean to your hero.

Keep your vision cards so that you can show them to other players.  You may want to buy special sheets that hold, display, and protect cards like these.  You will be getting more vision cards cards as your hero completes quests; your gamemaster gives these cards to you so you can have a visual record of your hero's activities.

A side bar informs us, “If the gamemaster provides your vision cards, be ready to give them back if you stop playing your hero.”

Each vision card has an image of a person or scene.  The back of each card presents questions about the image that encourage interpretations that may be useful in establishing a character's background. 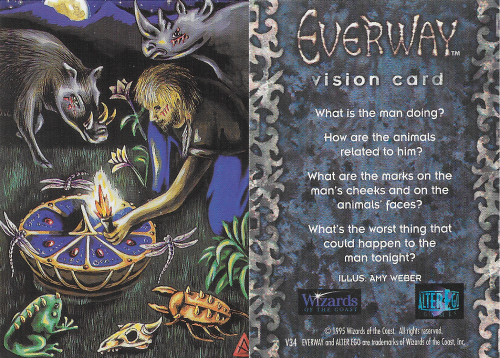 An important part of the Vision Stage is the “introduction,” wherein the players show one another the vision cards they selected for their respective characters and “describe briefly what these images mean.”  Players question one another (as does the gamemaster) general questions about their characters.  As I mentioned previously, this exercise enriches a player's concept of his or her character and allows players to appreciate one another's characters.  In this manner, a player character becomes a genuine character as opposed to something that can be reduced to various numbers and a class affiliation.  It is this sort of human interaction that can differentiate tabletop role-playing from computer role-playing.

A side bar on page 68 of the Playing Guide states:

If you develop a hero alone, leave some details unfinished.  When you get a chance, have another player ask you questions about the hero so that you get some input from others before finalizing the hero... You can even talk with another player over the phone or email, though this prevents the other player from seeing your images.

Liberated from the technological restrictions of the 20th Century, sharing images is no longer an obstacle.  In fact, nowadays, physical cards are unnecessary.  An app would facilitate the Vision Stage.

As alluded to above, a separate set of ninety vision cards was available to enhance Everway play.  The ninety cards included with the game should be sufficient for most playing groups, but surely additional options would be welcome.  These “companion collector” vision cards were sold in booster packs.  (Leave it to Wizards of the Coast to shoehorn aspects of a collectible card game into a role-playing game.)  This gimmick may have put off gamers that may have otherwise shown an interest in Everway.  Such booster packs may have been viable if – in addition to vision cards – they included more source cards, quest cards, and alternate versions of Fortune Deck cards; may have been viable, but probably not.

Interspersed throughout the Tabloid! rulebook are ersatz articles written by some TSR regulars.  “The articles are the 'background' of the TABLOID! world,” we are told.  Furthermore, the rules explain:  “Use the articles as inspiration for your own adventures – they are there to give you ideas.”  The list of articles follows:

The articles are one or two pages each, except Moore's 'Russians' article (3 pages) and Brown's article on spontaneous human combustion (4 pages).  The headlines tend to take up more than one-half page each.  In all, the articles account for 20% of the book's page count.  A handful of articles would have been more than sufficient; perhaps a sidebar detailing apparent cases of spontaneous human combustion and another with a list of planes and ships that disappeared in the Bermuda Triangle.

“The Wedding of the Year” is “the first of two funtabulous, fully authorized and mostly realized TABLOID! adventures designed specifically to get your TABLOID! campaign to a running start.”  In this adventure, “your favorite actress” marries a “crime boss heir.”  The player characters are assigned to obtain photographs of this private event.  There are two days before the wedding and most of the six page adventure is a discussion of obstacles the characters face and the results of potential strategies the players may attempt.

The second adventure, “Faux Pas,” is a more scripted affair.  It asks the question,  “What's buried in Grant's tomb?” – a play on the riddle “Who's buried in Grant's tomb?”  The basis of this adventure is that a Canadian professor, Anton Sacka-Weejie, has announced that “Ulysses S. Grant was really a space alien!”  The player characters are required to introduce the professor in person.  This entails traveling to Yellowknife.  The author dedicates a few paragraphs describing how Canadians talk and admitting his ignorance about Yellowknife.  The player characters encounter a wendigo which, for purposes of this adventure, is an alien being.  “In another adventure,” we learn, “the wendigo might be something else, depending upon the conspiracy involved.”

Since the player characters only have a P.O. Box address for the professor, “they must go to the post office and bribe some mail clerk into looking the address up.”  Suggested complications include:  (1) The Canadian Postal Service is on strike – again, (2) Ultra-Patriot is working the desk today, and (3) The entire staff is Quebecois.

Eventually, once the player characters find the professor, he relates that...

[T]here is an evil conspiracy of ancient proportions that has been working for centuries to control humanity for its own evil ends.  According to him, some time in the 1800's THEY perfected the secrets of cloning and behavioral conditioning.  This allowed THEM to clone world leaders and then condition those clones into absolute loyalty to THEIR conspiracy.

The professor knows this because alien beings told him so.  These same aliens “taught THEM the secrets of cloning a long time ago” without realizing “THEY would use these secrets to evil ends.”  Said aliens show up and confirm this information.  We learn, “Grant was really an alien, planted by the good guys to try to undo some of the damage caused by THEIR clones...”  However, the good aliens “don't want their involvement known!”

No adventure is complete until the players submit the story.  To facilitate this, the game provides an “Instant Copy Generator,” a Mad Libs type template (shown below).  “No thought required,” the book assures us. 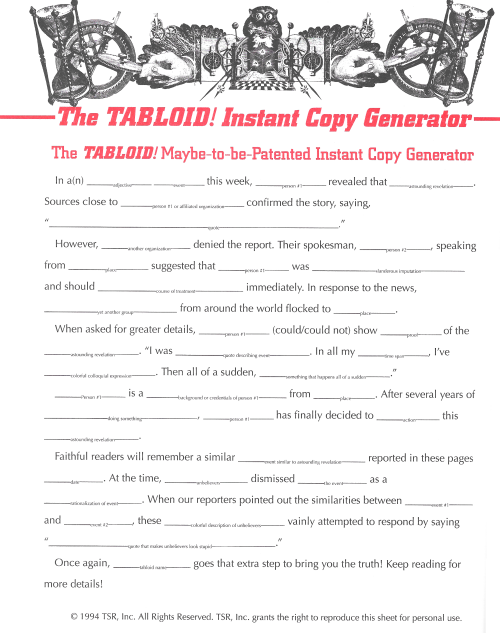 Posted by perdustin at 5:43 PM No comments: