The Cosmology of Everway 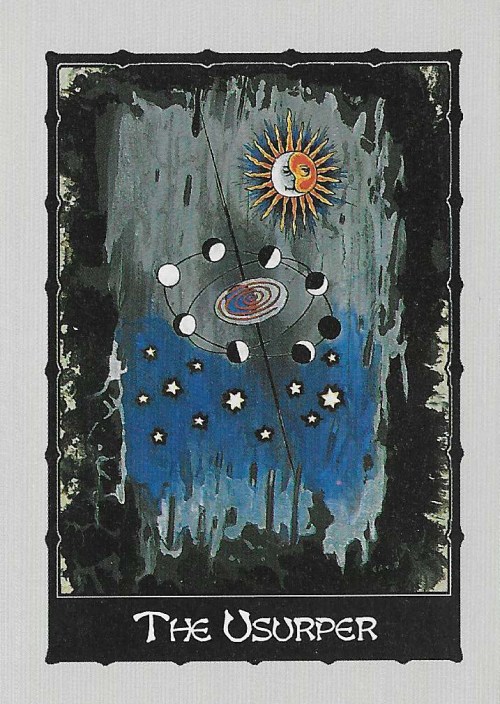 The setting of Everway consists of innumerable spheres.  Each sphere “is an entire world... physically similar to real-life earth, the same size and shape, with cold polar regions, a hot equatorial band, varying seasons, oceans covering most of the surface, and so on.”  Spheres are connected to one another by gates.  People who use gates to travel among the spheres are called spherewalkers; all player characters are spherewalkers.  Otherwise, very few people are spherewalkers.  Most people aren't even aware of other spheres.

There are also realms.  A realm is...

...an area on a sphere in which cosmic forces hold sway, an area with a shared story.  It may encompass several kingdoms, city-states, or lands, or it can be a small area.  A realm can be as large as a sphere, but usually realms are smaller, so that there are many realms in a sphere.

Everway is expressly a fantasy setting, presenting “a world of warriors, shamans, monks, assassins, unicorns, dragons, goblins, ghosts, temples, castles, shrines, ruins, curses, spells, prayers, and quests.”  We are told, “modern or futuristic elements, such as firearms, spaceships, and robots, don't fit.”  However, “With your gamemaster's permission, you may play someone from a modern or futuristic sphere, provided that the hero can't return to that sphere and can't use sophisticated, high-tech tools, weapons, or skills.”

An important Everway game mechanic – as well as an important aspect of the setting – is the Fortune Deck.  Consisting of thirty-six cards, a Gamemaster can use the Fortune Deck to guide play.  It exists in the setting as a “deck of symbolic cards use to divine the future.”  Similar to tarot, each card has a distinct meaning, as well as a contrary, 'reversed' meaning when a card appears upside-down.  In Everway, there are three ways to resolve actions:  the Law of Karma, the Law of Drama, and the Law of Fortune.  The Law of Fortune involves drawing cards from the Fortune Deck.  While this represents the only type of random resolution in Everway, interpretation of the cards is subjective.

We learn, “The deities created the spheres for people to live on, and they made them fit for human life.”  At the same time they...

...created the Fortune Deck as a guide for humanity.  In its original form, it was a series of thirty-six images laid out in a specific pattern.  The images detailed the evolution of the human soul from its manifestation in the world, through various lives or stages, to its eventual, inevitable perfection...

...A deity variously identified as any of several deities of chaos or trickery, stole one of the images and then mixed the others together so that the original pattern was disrupted and forgotten...

The loss of the thirty-sixth card created a cosmic void, an emptiness that the card used to fill.  Sometimes in a realm a lesser force grows to fill this void until it asserts itself as the thirty-sixth force in that realm . . . Such a force is the “usurper force.”

The thirty-sixth card represents this “usurper force.”  Sometimes gods are represented in the Fortune Deck, such as Odin in the 'Law' card (below).  Different realms use different gods and some realms may not use images of deities at all.

“You can interpret a fortune card based on many things,” we learn from the Playing Guide, “the card's name, the listed meaning, the card's elemental and planetary correspondences, and the art on the card.”  The Fortune Deck can be consulted to decide the result of a specific action, for a yes/no determination, an interpretation of large-scale events, or to improvise details. 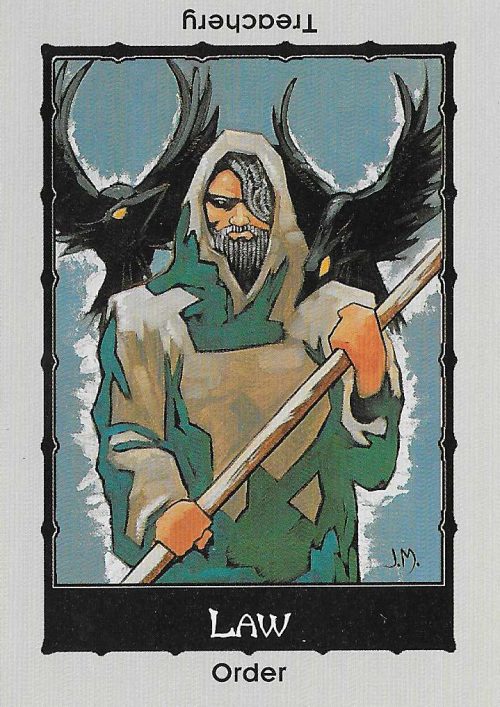 Odin is the Law-Giver.  He walks among his people and guides them with wise sayings and rules of conduct.  To guide people to that which is right, he uses speech first and force second.

Just as the wind can change direction, so the law can become a tool for injustice.  Treacherous people can use others' faith in law against them, violating laws that others expect them to follow.

Odin's ravens, Thought and Memory, represent Law's ties to air, and thus to words and to forethought.  Odin's walking stick signifies the card's ties to earth.  Earth represents Law's link to that which is stable, orderly, and strong.

In the Identity Stage of character creation, the player chooses different Fortune Deck cards to represents the character's Virtue, Fault, and Fate.  A character's Virtue “represents some way in which he or she is particularly gifted.”  A character's Fault “is a way in which he or she is particularly weak or vulnerable.”  Virtues and Faults can be personal traits, magical gifts/curses, or aspects of fortune.  Fate is a character's “current challenge, where the hero is in her life's story.”  Each realm can also have a Virtue, Fault, and Fate.

The Fortune Deck can also be used for divination.  The “most common way” to structure a reading is shown below. 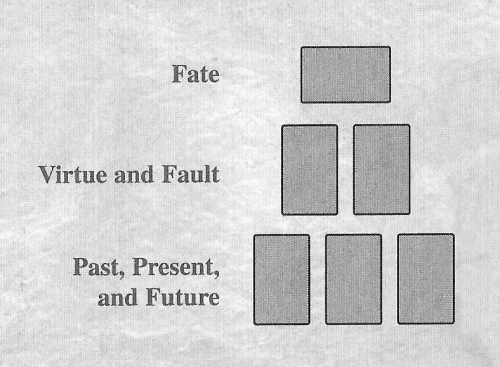 Posted by perdustin at 11:08 PM No comments: