A thoul is a magical combination of a ghoul, a hobgoblin, and a troll...

In Volume 3: The Underworld & Wilderness Adventures of the original Dungeons & Dragons rules, the 'Monster Level Tables' begin on page 10.  Reproduced below is the Level 2 table in its entirety. 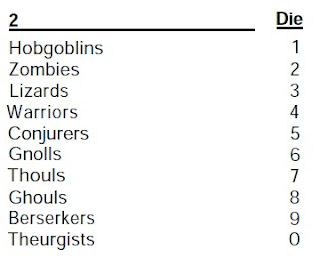 The first published instance of “Thouls” appears between “Gnolls” and “Ghouls.”  However, in early editions of the rules “Thouls” did not appear, but “Toads” did.  (I presume that they were giant toads if they were included on the Level 2 table.)  It would seem that the inclusion of “Thouls” in the later printings was a mistake.  However, the creative minds at TSR decided to have thouls be an original species of monster – a composite creature with certain characteristics of trolls, ghouls, and hobgoblins.  The word “thoul” is reasonable etymological blend of troll and ghoul (similar to gnome + troll = gnoll), but how do we explain the inclusion of hobgoblin?  Perhaps the hobgoblin race represents an adaptable genetic template (or the magical equivalent of genetics) that allows effective species combinations.  After all, according to Volume 2:  Monsters and Treasure, gnolls also appear similar to hobgoblins.

Thouls are first described in Monster & Treasure Assortment – Set Three, where they are listed in levels seven and eight.  Of course, the description is rather minimal.  Here are the listings for thouls and their constituent creatures.

Here are the statistics used in the Monster & Treasure Assortment:

Note there is no suggestion of regenerative capabilities for thouls.  Not until 1981, with the publication of the second edition of (Basic) Dungeons & Dragons, did thouls explicitly possess regeneration.  Here is the description of Thoul á la Moldvay: 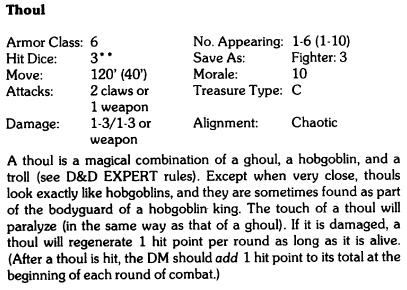 Eventually, thouls were converted into terms of Advanced Dungeons & Dragons (albeit second edition) courtesy of the Monstrous Compendium – Mystara Appendix.  In my opinion, the AD&D version of the thoul strays too far from its origins.  Because of the second alignment axis, what was “Chaotic” in the basic paradigm becomes “Lawful Evil.”  The details supplied by the Monstrous Compendium in terms of 'Habitat/Society' and 'Ecology' betray the aloof majesty of the BECMI thoul.  Also, Monstrous Compendium thouls are not necessarily nearly identical to hobgoblins.


Some...show clear signs of their troll ancestry. Such thouls can have any of the following characteristics: relatively hairless skin with a greenish cast instead of the dark-red or reddish-orange skin of hobgoblins; slate gray or dull black hair, ropy in texture; long and tubelike noses like a troll’s, very different from a hobgoblin’s rather canine muzzle.

Of course, all of this raises the question as to what a hobgoblin is supposed to look like.