Without further comment, I present a missive originally published in Arak / Son of Thunder #13 (September 1982): 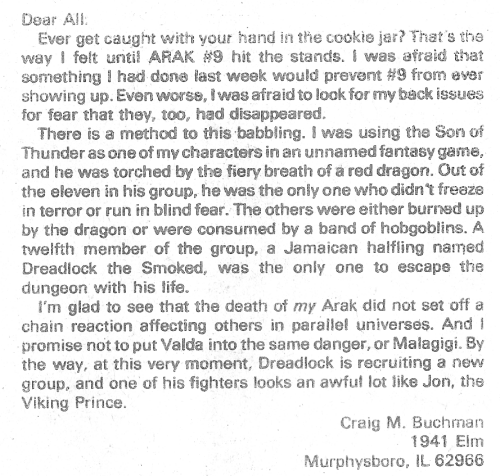 Posted by perdustin at 4:32 PM No comments:

The Tabloid! Weapons Table assigns damage amounts to various circumstances, not just weapons.  A few examples are provided below.

Electroshock therapy:  1d4 (But you have a much nicer character)

Unlike other Amazing Engine games, weapons (and other sources of damage) in Tabloid! do not have an assigned lethality rating.  Instead, any given source of damage has a lethality rating based on how newsworthy a character's death would be should the circumstances turn out to be fatal.  To this end, Tabloid! presents a Death-to-Copy Ratio Table; the more attention that a death would garner, the higher the lethality rating of associated damage.  A “normal” death (e.g., old age, heart attack, etc.) has a lethality rating of “0.”  A death which is 'one for the records books' has a rating of “8.”  Each whole number between those extremes represents a distinct level of news item and lethality.  For instance, a 'filler bit' death (e.g., eaten by crocodiles, victim of a voodoo curse, etc.) has a rating of “4.”  A 'front page news' death (e.g., getting torn apart by Bigfoot, being killed in a mob-style execution, etc.) has a rating of “6.”  Evidently, the normal death rating is meant be zero; however, with a rating of zero, damage is not fatal (except in the instance of an unconscious character).  This is in conflict with the Amazing Engine damage rules:  “Lethality ratings can never be less than 1 or greater than 10 (0 on the die).”

Zeb Cook provides several examples of deaths that qualify as 'one for the record books', some of which are fictional and some which are not.  Among the factual examples, there are people killed by cheese, molasses, and beer.  We might suppose that drowning damage (1d10/minute) applies to molasses and beer, but guidance for cheese damage is lacking.  In any event, we encounter something of a paradox; common ways of dying are less dangerous than more unusual circumstances.

Editors are encouraged to permit player characters “to heal faster than the rate allowed by the rules [otherwise] ...their wounds are going to become a burden.”  This can be accomplished through appropriately tabloid methods:  “vitamin therapies, allergen tests, orgone reactors, inhalants, aromatherapy, herbal mojo bags, all-lemon-rind diets, and cortex manipulation groups!”  We also learn that...

With just a touch if creativity, characters almost never have to die.  Unless, it'd be hilarious, of course.  Then you should stick it to them – just this once.

Should a player character actually die, the situation need not be permanent.  We learn, “There's nothing that says the character's spirit can't hang around for a while.”  Existence as such a ghost “lasts until the player gets a chance to create a new character – or gets the old one restored via some unknown means.”  As ghosts, player characters...

...are limited in what they can do.  They can't directly talk to other players, and everything they do is a psychic power.  That means they have to manipulate things to get their message across and that means making Psyche checks to accomplish anything.

With the consent of the Editor, a dead character can come back to life.  However, no character can return without being changed.  “Maybe the character has amnesia (retains all skills but gets a new name and no knowledge of the other PCs),” the rules suggest, or “Maybe he or she just loses some skills.”  Of course, the mechanism of reincarnation must be considered.

So how was the character miraculously returned?  Aliens, clones, mad scientists, Atlantean super-science, or just good clean living – you name it.  That's the point – getting returned should be an adventure in itself.

Posted by perdustin at 8:50 PM No comments: 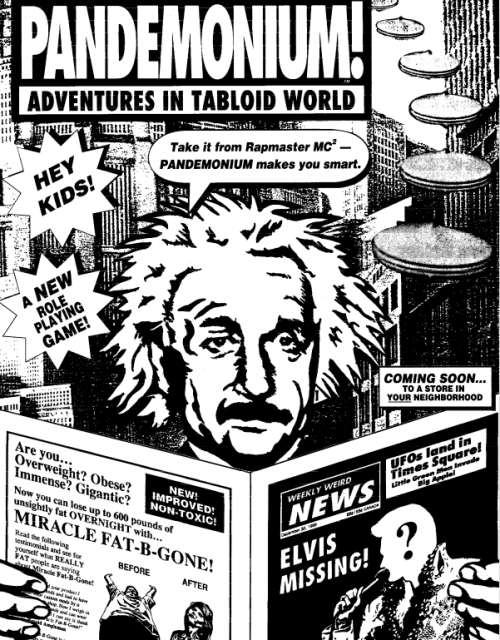 The essential rule mechanic for Pandemonium! is to roll 1d10, “add the appropriate numerical ability” to create an Action Sum.  By consulting the Fate Table, the Action Sum indicates a result.  The Fate Table is not especially complex.  An Action Sum of six or greater represents success; the higher the number, the greater the success.  Conversely, when the Action Sum is less than six, a lower number represents a more profound failure.  An Action Sum of one or less indicates a “Total Screw-Up – your inept blundering results in the worst possible consequences.”  An Action Sum of ten or greater is an “Excellent result!,” meaning, “Your expertise results in the best possible consequences.”

In May, we learned that Pandemonium! has E-Z Rules and Very Complicated Rules.  Under the E-Z Rules, P.I.s have a maximum value of three for attributes, paranormal talents, hobbies, and mundane professions.  Additionally, P.I.s can use a maximum of three points of Instant Karma to influence Fate Table die rolls.  Under the Very Complicated Rules, these maxima become ten.  The Very Complicated Rules also introduce the concept of the Degree of Difficulty Rating (or DDR).  The DDR is a numerical value applied to the Action Sum before consulting the Fate Table.  A positive DDR represents a circumstance that makes the action easier (e.g., 'Hitting someone from behind' is +1) while a negative DDR represents a circumstance that makes the action more difficult (e.g, 'Climbing a wet slope... while carrying a friend on your back' is –7).  The combined DDR for any given action must fall within the range of –10 through +10.

In Pandemonium!, the term for “gamemaster” is Editor.  According to page 7, the terms “El Exigente,” “Grand High Pooba,” and “Enlightened One” are also applicable to Editor.  Page 39 supplies the following caution with regard to determining DDR:

If the Editor makes things too hard for the P.I.s they will quickly get discouraged, and may not tell all of their friends and relatives to buy a copy of this game – in which case the makers of this game will have to send somebody named Knuckles to pay a little visit to your house.

Mind – “Anything of an intellectual nature, including comprehension, memorization, mental endurance, intuition, mental stability; also includes the ability to process information perceived through the senses...”

Spirit – “Anything of a spiritual nature, including the will to live, spiritual strength and endurance, the ability to resist temptation or coercion, willpower, etc.”

Body is the attribute used for physical combat, but concepts of combat can be extrapolated to Mind (as in Mind Control) and Spirit (as in Astral Assault).  A successful attack inflicts damage equal to the final Action Sum minus five.  Damage is subtracted from the applicable attribute.  Should any of the attributes be reduced to –10 or below, death will result unless prompt treatment is received.

Regardless of the applicable attribute there are “three basic types of combat.”

Injure – inflicts damage as described above.

Restrain – attempts to control or restrain the opponent's Body, Mind, or Spirit.

Special Effects – maneuvers “of the type that one generally sees only in the movies, on TV, and in comic books.”  Examples include one-shot knock-outs, acrobatic moves, spectacular leaps, creating a diversion, and “running through a hail of bullets or laser beams without suffering so much as a scratch – as long as someone is covering you...”

Posted by perdustin at 10:24 PM No comments: