In 1978, DAW Books published War-Gamers' World having the subtitles of “Magira I” and “From the chronicles of the world's longest existing fantasyland.”  According to the back cover copy:


The Fellowship of the Lords of the Lands of Wonder!  That is the name of the select group who control the struggles and marvels of the world known as Magira – a fantasyland planet created years before war-games were known in America.  It was the members of FOLLOW who built up Magira, city by city, island by island, crown by crown, created its continents and oceans, and continue to this day to bring ever greater sword-and-sorcery reality to its misty shores.

Foregoing the contradiction of “sword-and-sorcery reality,” we are introduced to the notion of an early “fantasyland” curated somewhere other than the United States.  The “Lands of Wonder” portion of FOLLOW refers to a German fanzine of fantasy literature.  One might wonder why Germans would use English words to name their fanzine (as well as their organization).  Jon Peterson, in his Playing at the World, explains:


There existed no native German tradition of sword-and-sorcery fiction, nor much by way of translations of the major American works, and thus Lands of Wonder is littered with English and Anglicisms, as any reader familiar with the genre surely commanded a reasonable grasp of the language in which it was written.

Authorship of War-Gamers' World is attributed to Hugh Walker, pen name of Hubert Strassl, the Austrian who started Lands of Wonder.  Strassl wrote the story in German and it was first published in that language in 1975.  The original title was Reiter der Finsternis which translates as “Rider of Darkness.”  In fact, the first page excerpt is provided under the words “Rider of Darkness.”  Given the back cover copy and the change in title, it seems an effort was made to market to the war-gamer demographic.  At the time, the distinction between war-games and role-playing games was something of a gray area.  Anyway, “Magira I” implies further volumes.  Only two more books were translated into English and both of these retained their “. . . of Darkness” titles.  By the time War-Gamers' World was published, Magira served as a setting for an actual role-playing game, but for the first decade or so, Magira was more of a shared narrative universe which served as a backdrop for a continuous wargame campaign.


Now, after eleven years of continuous playing (the players getting together once or twice a year), many of the original dreams have been realized.  Many of the battles that took place have become stories.  Empires have grown up and fallen.  Legends, myths, heroic figures, kings, warriors and sorcerers have sprung up.  What pleasure there has been in dreaming a little and, as it were, “stage-managing” the dream.  The reality of such a barbaric and warlike world would surely be less than desirable, but I find it highly amusing occasionally to leave reality behind and to play some entertaining game or to read some entertaining book.

Peterson describes the 'board' that was used:  “Strassl and his collaborators favored a board shaped like a circle rather than a rectangle; for a game of four to seven players, they preferred a massive board, roughly two meters in diameter, with hexagons of 1.8 centimeters to a side for a total of around 3,500 hexes on the board.”  Hexagon imagery is prevalent in the story.  As befits a tessellation of hexagons, Magira has six cardinal direction instead of four.  These are indicated in the compass of the map presented above and are also presented below. 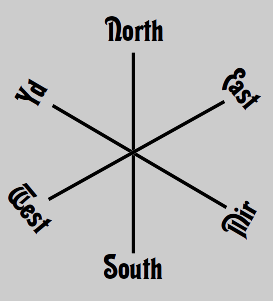 The plot involves a 'real world' player named Franz Laudmann who finds himself in the 'game world' which he had previously assumed was a product of his imagination.  Usually in such a story, the player is the protagonist and becomes a hero.  War-Gamer's World subverts this trope in that Laudmann is thrown into a dungeon for committing heresy and is later scheduled for sacrifice.  In the prelude, Laudmann is the point-of-view character but other characters assume that role for most of the remainder of the story.

About half-way through the story, the player – who chooses to be called Frankari in the game world – encounters the otherworldly “creators.”  The creators are opposed to the Mythanen, the bad guys responsible for summoning Frankari into the world of Magira.  The Mythanen – Adepts of Chaos – come from the “ancient sorcery kingdom!”  The creators inform Frankari, “The rider of darkness is on his way” and “He will find you and show you the road you must take.”

So, at the conclusion of the 160 page book, the player – the ostensible reader identification character – is dead and a small group of native Magirans have banded together (much like an adventuring party) to find their destiny.  So, in the subsequent books, there are two storylines:  one where the Adepts attempt to replace real world players and one with the continuing adventures of the natives.

Posted by perdustin at 10:39 PM No comments: