Where Fantasies Are Real & Reality Is FANTASTIC 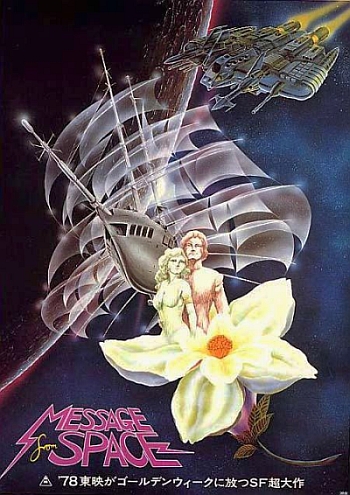 My first exposure to Message from Space was when it played on a double bill with Superman so many years ago.  To some (many? most?), Message from Space is a gaudy Star Wars rip-off.  It's certainly gaudy and it would not have been made except to capitalize on the Star Wars phenomenon but, as Lex Luthor said that very same day:


Some people can read War and Peace and come away thinking it's a simple
adventure story.  Others can read the ingredients on a chewing gum wrapper
and unlock the secrets of the universe.

While my appreciation of Message from Space falls somewhat short of unlocking secrets of the universe, the film offers more than a simple adventure story.  If we divest ourselves of the 'spaceships = science fiction' fallacy and accept the film as fantasy (as the tagline indicates), the film becomes more palatable.  Message from Space was inspired – in part – by Nansō Satomi Hakkenden, an epic of Japanese literature and one of the longest novels ever.  The influence is especially noticeable with regard to what Joseph Campbell referred to as “the call to adventure.”

Message from Space takes place twenty years after the last Space War, during “the times when earthling adventurers roamed the planets of the galaxy seeking riches in the form of resources and colonies.”  The warlike, steel-skinned Gavanas oppress the enlightened Jillucians nearly to point of extinction.  The Jillucian patriarch dispatches eight holy Liabe seeds to locate the assorted heroes who will save the Jillucians – and the universe – from the tyranny of the Gavanas.

The Liabe seeds, with the appearance of walnuts that sometimes glow, make their way to the film's protagonists who, in another context, might be player characters.  However, the meaning of the Liabe seeds (from the protagonists' viewpoint) must wait for exposition from Princess Esmeralida.

If the Liabe heroes (i.e., player characters) are destined to save the universe, then wouldn't that compromise player agency?  Well, yes it would.  As a matter of fact, in Message from Space, three of the chosen characters toss their walnuts* and a fourth declines the honor of being a hero.  This is representative of what Campbell aptly termed “refusal of the call.”  Of course, a story about characters deciding against doing something interesting isn't a worthwhile story.  Eventually, the characters that initially refused the Liabe seeds change their minds and accept their roles as heroes.  So, player agency is still thwarted.  Is that a bad thing?  Not necessarily.

Absolute agency is untenable in a role-playing game.  A player adopts a “role” for his or her character.  After all, we are talking about role-playing games, not agency-playing games.  Agency is limited in that player character knowledge should be restricted to in-game information available to the “role.”  Also, the player imbues his or her character (or role) with a personality and a psychology.  The way a character responds to stimuli – while not scripted – should be consistent with that personality and psychology.  Gygax addressed this issue by penalizing “aberrant behavior” with additional required training time/cost for level advancement (DMG, p. 86).  Of course, for Gygax, a character's “behavior” should be defined by class and alignment.

The notion of consistency should not preclude the organic development of personality and psychology (or “behavior” to employ a convenient term).  Yet, ultimately, it is a player's responsibility to play the role of his or her character with an established behavior and to interact appropriately within the setting.  Likewise, some of the GM's responsibilities include providing an intuitive (if not immersive) setting and accommodating (rather than curtailing) player agency.

Your character should refuse the Liabe seed if the character's established behavior suggests that course of action.  However, there should be circumstances wherein your character would accept the Liabe seed.  Is it an intolerable suppression of player agency if the GM arranges for those circumstances to occur?  I don't think so; I think there is a difference between 'railroading' and 'advancing the plot'.

As a continuation of last week's post, here are nine more spellbook pages.  All of these images are adapted from 'real world' sources.  Again, Thoul's Paradise bears no responsibility for magical complications caused by its readership.

The Watchtowers of the Order of the Golden Dawn (such as the Great Western Quadrangle of Water, below) remind me of circuit board diagrams – as though a wizard could use such a talisman to trace a thought process for fashioning various magical effects.


Similarly, the 'spirals' below might indicate the required sequence of concepts for casting a given spell.


Spellbooks would likely provide information regarding the identification, cultivation, and preparation of material components.


In the French role-playing game Rêve de Dragon, the spells that a magician may cast are limited by which “dreamland” the magician's astral body occupies.  For game purposes, there is a map of the Dreamlands where each dreamland is represented by a hex.  The so-called Zoroaster's Telescope reminds me of the Rêve magic system.


Here are a variety of images for which I do not have particular commentary.

Posted by perdustin at 1:07 PM No comments:

Pages from Spellbooks (part I)

Magic is a significant – if not essential – element of fantasy role-playing game settings.  Spellbooks are the primary means by which wizards are associated with magic.  Therefore, spellbooks, and the pages they contain, ought to enhance the color and flavor of a campaign.  In this post, we see what spellbook pages might look like in a fantasy campaign.  These examples are compiled from 'real world' materials, although some of the materials are not associated with magic in the real world.  Thoul's Paradise disclaims any responsibility for the injudicious use of magic by its readers.

Spellbook pages need not contain words exclusively.  A picture is worth a thousand words and, as such, symbols, diagrams, and images may be a more efficient means of conveying information for wizards.

Contrast the above with the page below, which is more like a page from a murderhobo's grimoire with its gruesome imagery and jagged script.


All magic and cleric spells are similar in that the word sounds, when combined into whatever patterns are applicable, are charged with energy from the Positive or Negative Material Plane. When uttered, these sounds cause the release of this energy, which in turn triggers a set reaction. The release of the energy contained in these words is what causes the spell to be forgotten or the writing disappear from the surface upon which it is written.

Spells are “forgotten” as a check against the power of spellcasters; spellbooks are necessary so that magic-users can memorize “forgotten” spells. In the 5th edition rules de-emphasize the memory aspect of spellcasting; instead the rules focus on “energy.” According to page 78 of the (5th edition) Player's Basic Rules :


...a caster...can cast only a limited number of spells before resting. Manipulating the fabric of magic and channeling its energy into even a simple spell is physically and mentally taxing...

Instead of using spellbooks to memorize forgotten spells, 5th edition wizards use spellbooks to recoup energy. Regarding wizards, page 31 of the PBR states: “You have learned to regain some of your magical energy by studying your spellbook.”

The Earthdawn role-playing game adopts the notion of a “spell matrix.” Per page 153:


A spell matrix is an astral construct linked to the intelligence of the magician, energized by the magical energies of the astral plane. Magicians in Earthdawn use spell matrices as a conduit through which they can transfer the energy of a spell from astral space into the physical world. (Emphasis in original.)

To me, the matrix paradigm makes more sense than forgetting spells or gaining energy through study.  Let's assume that each spell requires a psychic construct that becomes spent when the spell is cast.  The construct must be reconstituted through visualization and concentration before it can be used again.  With this paradigm, a wizard must study his (or her) spellbook as part of the necessary mental effort to (re-)formulate the construct or matrix (as opposed to memorizing a spell or recovering energy).  Such a spellbook might easily contain 'perception exercises', like those below, which would allow the spellcaster to access the cognitive state needed to manipulate magic. 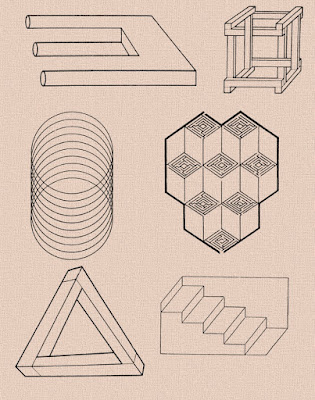 Casinos play an important part in the Bond mythos.  It is often the place where characters first encounter Major Villains and test their mettle, where contacts are made, or where they go to relax and have a good time.

Chapter 7 of the James Bond 007 role-playing game is devoted to “Gambling and Casino Life.”  On page 37, the Gambling skill is described as follows:  “These tasks allow characters to play casino games, but without the players actually needing cards, roulette wheels, and the other paraphernalia of casinos.”  Specifically, casino games are resolved using die rolls – usually, Gambling skill rolls.  The Gambling skill is based on the Perception characteristic; therefore, a character without any skill levels in gambling will use his (or her) Perception for the Primary Chance of a gambling task, but with a -3 Ease Factor modifier.

A die roll (i.e., Gambling skill at an Ease Factor of 5) is made for each character participating in a given card game.  This result of this roll represents the hand dealt to the character.  In terms of RPG mechanics, the roll is either a failure or has a Quality Rating of one through four; 'one' being the best possible result.  Even if the roll failed, “The player then has the option to roll a second time (simulating the draw, an extra card, and so on), which may or may not improve the hand.”  (The second roll is also made at an Ease Factor of 5.)  With two rolls, the appropriate table must be consulted, “cross-referencing the new dice result with the first to obtain the final Quality Rating.”

Here is the table for poker: 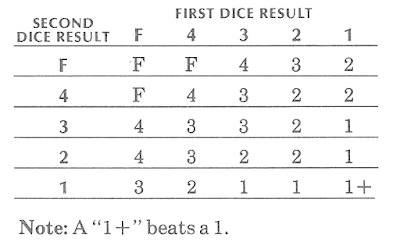 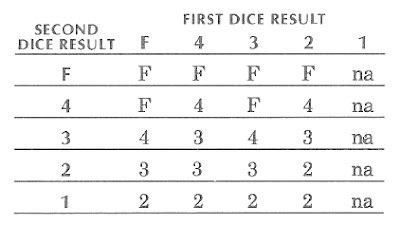 Player Characters are allowed to spend Hero Points to improve Quality Ratings.  Chapter 7 does not disclose how a player should inform the referee that he (or she) is using Hero Points without alerting the players of other gamblers.  Perhaps the player can position an unused die to display the number of Hero Points (if any).

“A Player Character may never cheat,” the rules explain, “unless he has detected another NPC cheating.”  If a character suspects that an NPC is cheating, a Perception roll is made for the suspecting character at an Ease Factor derived from the cheater's Gambling Skill Level.  (For example, a Skill Level of 1 means an Ease Factor of 5 while a Skill Level of 10 imposes an Ease Factor of 2.)  Of course, this assumes there is cheating; if there is no cheating, the result of the Perception roll is irrelevant.  If there is cheating – and the player character detects it – the observing character “may confront [the cheater] with it or cheat back.”  In terms of game mechanics, how is cheating accomplished?  The player (or the GM) simply lies about the Quality Rating of his (or her) rolls.  This is why an indifferent referee is necessary.

In addition to card games, Chapter 7 discusses roulette even though “Roulette is a game that does not often appear in Bond's world; he distains (sic) it because of the lack of skill involved.”  Here is the table for roulette: 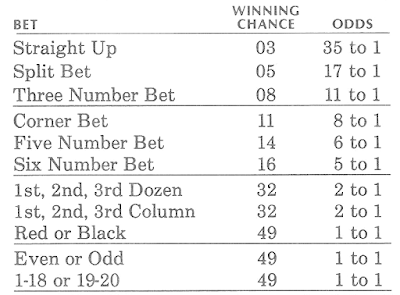 Posted by perdustin at 8:00 PM No comments: