Included in the back of the Tabloid! rule book fold-out poster map of “The Real Weird World,” a portion of which is shown above.  It's incorrect to call the map a selling point since there's no mention of it in the cover copy.  I suppose it was meant to be a source of inspiration, but it just seems like a mistake.  If anything, it exemplifies some of the things I find off-putting about the game.

Apparently Tom Wham was unavailable to draw the map, not that there's anything wrong with Tom Wham.  However, having Dennis Kauth draw the map in the style of Tom Wham seems such a waste.  Speaking of waste, the map for one of the included scenarios is attributed to Dave Sutherland.  If you have Dave Sutherland on tap, why limit his contribution to drawing a house plan?

Attention to accuracy is somewhat lacking.  Roswell is, of course, in New Mexico and Hangar 18 (not 'Hanger') is in Ohio.  In the rules, author Dave Cook refers to the Trilateral Commission as Trilateralist Commission and Nostradamus as Nostrodamus.

The map refers to Lake Geneva as the location of a “secret mind control base.”  This is interesting given the degree of caution with which TSR's lawyers approach other portions of the game.  Elvis is a beloved staple of tabloid journalism (or was in the twentieth century, at least) and any game regarding the tabloids cannot ignore the King.  However, Tabloid! scrupulously avoids direct mention of his name.  Instead, we get a sequence of asterisks – E***s P*****y.  One image of Elvis in the game as a 'censored' block over his eyes and another image is a bust, but with everything above the mouth is cut off.  Other entities that get the asterisk treatment include Burt Reynolds, Big Bird, Geraldo Rivera, Michael Jackson, and Satan.

Tabloid! has no pre-generated characters.  In other games, this may be cause for me to complain, but this doesn't pose a problem in Tabloid!  There are sufficient examples in the System Guide and the components specific to Tabloid! comprise a clearly described career path mechanic.  To begin with, there are “Résumé Steps.”  The first step is to select a post-high school option:  College, Journalism School (to be “an idealistic reporter – like G*****o R****a”), Work, or the Beach.  Each choice is represented by one the remaining steps; however, after the first step, the steps are not followed in order, nor will every step necessarily apply to a given character, and a character may repeat the same step multiple times.  Each time a character engages in a step, a year passes.

A player character in Tabloid! is entitled to a number of skills equal to Intuition / 15 (rounded up) plus Learning / 10 (also rounded up).  Skills are divided into seventeen pools called schools.  Some examples include the Institute of the Secret Truth, Lawson's Absolute Center of the Universe School, and the G*******d Tour Guide Training Program.  Most skills are only available from a given school; however, there are some skills that are available from more than one school.  For instance, Photography is available from both the CIA University of the Air as well as the Forbert School of Celebrity Nude Photography.  Unlike the CIA, however, the Forbert School offers the specializations and enhancements of Video Camera, Paparazzi, Darkroom, and Photo Retouching.

The Journalism School step is similar to the College step, except the character automatically enrolls in the Columbia School of Journalism (and the player selects a skill form that pool).  Instead of developing a quirk, a character can acquire “one of those wonderful traits that so endears journalists to the rest of the world.”  The 'trait' table requires 1d12 and possible results include irritating whiner, caffeine addict, and one set of clothes.

With the Work step, the player rolls 1d20 to determine the character's job.  If the character engages the Work step more than once, he or she can keep the job or roll for a new job.  Most jobs are listed with a school from which the player can select a skill.  Each job also has a Savings Account modifier.  (In Tabloid!, finances are abstracted into a Resource Rating derived from a character's Savings Account.  Characters start with a Savings Account determined by 1d4.)  We are informed that, “All of the jobs described below (save one) are real and were held by people the designer knows...”  Examples include, Chicken Defroster - Night Shift (School of Hard Knocks), Convention Organizer (Kult College), and Fishmarket Gopher (San Diego Cryptozoological Society).  Additionally, in the Work step, at the cost of one point from his or her Savings Account, a character can attend night school and chose a skill from any school.

For the Beach step, the player selects one skill from either the School of Hard Knocks or Louie di Chang's Dojo and Shooting Range.  The character's Savings Account is also reduced by one point.

The College, Journalism School, Work, and Beach steps each have a 'life event' table.  Each time a character engages in a given step, the player rolls 1d20 and the result is checked on the table.  Any given result offers a bit of color commentary and describes an effect which may grant an additional skill, require the character to switch to a different step, or cause something else to happen.


Playing the D&D® game at work does not count as “reviewing.”  Character learns RPG Mind Control skill but takes a pay cut.  Lose 1 point of Savings Account and roll again on this table.


The one-armed man did it – really!  The cops aren't buying it.  Your character barely gets away in time and is now Hunted by the law for a crime someone else committed.  Lose 2 from the character's Saving Account but immediately gain Disguise and Survival Instinct.  Go to Step 5: The Beach.

The process of engaging in the various steps continues until the character fills all of his or her skill slots.  However, the last step must be followed to the end; this may mean the character acquires skills in excess of the nominal maximum.

Some skills are more useful than others, but if they lack utility, at least they are interesting.  Tabloid! is likely the only game where Smug Liberalism is a skill (with Secular Humanism as an enhancement).  Having the Predictions skill means a character “has studied famous predictions – biblical, astrological, oriental, alchemical, mystical, and whatnot” and can relate them to current events.  Additionally, the character “can fashion predictions for every occasion.”  Cook provides the following advice for cruel Editors:


If you really want to have fun with your players, secretly make a skill check for every prediction made.  If a success margin of 1 is rolled, secretly make note that the prediction is real.  Then use it later to build an adventure for the player characters.  Have fun – make them sorry.

Posted by perdustin at 8:56 PM No comments: 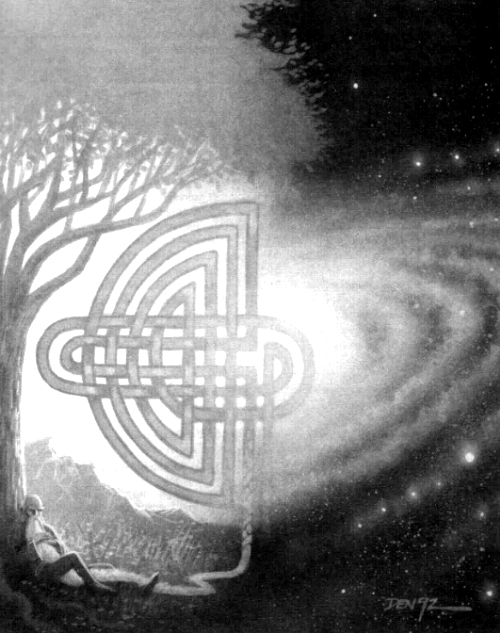 After an unintended hiatus due to computer issues, your humble host is back.  Before we were so rudely interrupted, we were discussing the two 'tabloid journalism' role-playing games from the early 90s.  TSR's contribution to the genre – the aptly named Tabloid! – was the last Universe Book for the AMAZING ENGINE® system.  Therefore, we must understand the AMAZING ENGINE in order to understand Tabloid!  According to the System Guide :

In the AMAZING ENGINE system, player characters are primarily defined by four ability pools of two attributes each.
When a player first generates a character he or she assigns a rank to each ability pool; Rank 1 being the most favored pool and Rank 4 being the least favored.  The player then selects four attributes to receive 4d10 each; the remaining four attributes receive 3d10 each.  For each attribute, the player rolls the set number of dice and records the total.  The player the allocates fifteen points between the two Rank 1 attributes, ten between the Rank 2 attributes, and five between the Rank 3 attributes.  The result is the basis of not only the player character, but also the “player core” (infrequently referred to as “character core”).

Aside from experience, a player core consists of the original Rank scheme and, for each ability pool, a dice rating.  To determine the dice rating for an ability pool, add the values of the constituent attributes, divide by ten, and round up.  This is the number of dice that the player can allocate among the two attributes when generating a new character.  For example, a first – or “prime” – character with a Learning of 23 and an Intuition of 28, would mean the player core would have an Intellect dice pool of six.  ( [23 + 28] / 10 = 5.1)  New characters based on a player core receive seven “free” dice to allocate among the eight attributes.

The maximum ability value for a beginning character is 50, even after allocation points from the ability pool's Rank.  As such, no more than five dice can be assigned to a given attribute and an ability's dice pool cannot exceed ten.  Different settings may allow for a base adjustment for ability pools or specific attribute.  Such adjustments can cause an attribute's starting value to increase beyond 50.  In Tabloid!, “All player characters...add +30 to their attribute scores.”

To determine if an action (such as skill use) is successful, percentile dice are rolled.  A result equal to or less than the applicable attribute value indicates success.  Depending upon circumstances, an attribute's value may be modified, making success more or less likely.  “A skill check always fails on a roll of 95–00,” we read, “but there is no corresponding chance for automatic success.”

Karen S. Boomgarden, credited with AMAZING ENGINE “Project Management, System Guide development and editing,” contributed an article to Dragon #195 (July 1993), “The little engine that could: the AMAZING ENGINE™ story.”  Most of the article is about For Faerie, Queen, & Country, the first AMAZING ENGINE Universe Book; however, it begins thus:


When the members of my product group first suggested the concept of the AMAZING ENGINE™ system, I was skeptical.  A stand-alone rules set, usable with any kind of fantasy or science-fiction setting we could dream up?  Complete basic rules in only 32 pages?  Whole game settings (with attendant rules modifications and specifics) in only 128 pages?  Sure.  Right.  Oh, and one more thing:  The players earn the experience points, not the characters, and they can take those experience points along to other game settings within the system.
It'll never work, I thought.

It turns out that her initial assumption was correct.  TSR supported the AMAZING ENGINE product line for about a year before giving up on it.  The world wasn't ready for such a concept and I guess it still isn't.  Nonetheless, the System Guide and the various Universe Book are available at Drive Thru RPG.

Posted by perdustin at 8:15 PM No comments: