Penguin Books, through its Puffin imprint, published FF in 1984 as a 240 page paperback.  From an American perspective, it may seem unusual to publish RPG rules in a paperback format, but in Britain it made sense to produce the rules in the same format as the gamebooks.  Corgi did the same thing with their edition of Tunnels & Trolls in 1986.

Although 240 pages, the bulk of the book is devoted to two sample adventures.  The rules section only encompasses about 58 pages and the font size is generous.  Still, the book accomplishes its goal of presenting a set of introductory RPG rules.  FF is intended for younger players, but it does not state the age of its demographic target.  However, in the introduction, Jackson writes:


Many of these role-playing games, like Dungeons & Dragons, RuneQuest, Traveller and Warhammer, are quite complicated, and their manufacturers recommend them for twelve-year-olds and over.  They refer constantly to charts and tables in the rules and require a lot of book-keeping by the players.  But the spirit of role-playing games is not so much the tremendous detail and statistics they go into (although there are 'walking-encyclopedia' types who revel in the complications of such games).  For most players, the real fun comes from the adventure itself.

Jackson engages the reader in an informal tone and deftly explains the rules of the game and the function of the GamesMaster.  As we can see on the Adventure Sheet reproduced below, there are three 'characteristics'.

Stamina (2d6 + 12):  “...represents fitness, will to survive, determination and general constitution.”  Should an adventurer's Stamina fall to zero, the adventurer dies.

Luck (1d6 + 6):  This score acts as a 'saving throw' in FF.  When a GamesMaster requires an adventurer to “test for Luck,” 2d6 are rolled.  If the result is equal to or less than the Luck value, the test is successful.  Regardless of the result, the Luck value is reduced by one; subsequent tests therefore become more difficult.

Combat occurs as a sequence of Attack Rounds.  In an Attack Round, each opponent rolls 2d6 and adds the result to his or her Skill value.  The total is the opponent's Attack Strength.  The Attack Strengths of opponents are compared; the opponent with the lower Attack Strength sustains a loss of two points of Stamina.  Attack Rounds repeat until combat concludes.  Upon sustaining a combat injury, an adventurer can test for Luck to reduce the amount of damage.  A successful test means a loss of only one point of Stamina, but a failed test means the adventurer loses three Stamina points.  When inflicting a combat injury, an adventurer can also test for Luck to cause more damage.  If successful, the adventurer causes four Stamina to be lost; however, if the test is not successful, the adventurer inflicts a loss of only one Stamina.

As presented, the rules in FF are limited, but the selling point is that it's an introductory system.  Also, as Jackson implied, the spirit of the game lies not in the rules but in the adventure itself – a sentiment that actually applies to all role-playing games.

The Lantern in Combat 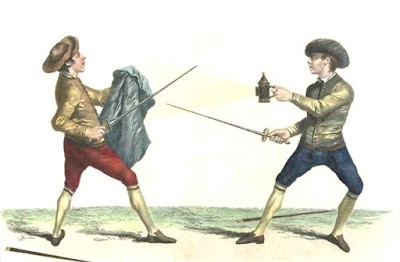 Domenico Angelo's The School of Fencing (1787) includes a section on how to confront an opponent who employs a “dark lanthorn” – a lantern with a panel that slides to block the light.  Evidently, footpads would equip themselves with a sword and lantern in order to commit their depredations.  According to Angelo, “there are severe punishments inflicted upon on those who are found sword in hand with a dark lanthorn...”  Reportedly, such a criminal would keep the lantern's panel closed, thereby maintaining darkness.  When the robber approached close enough to shine a beam of light into the victim's eyes, he would open the panel.  This would temporarily blind the victim, thereby facilitating the footpad's goal.

If such tactics were viable in the real world, why not apply them to dungeon delving?  Subterranean entities with sensitive eyesight might be particularly susceptible.  How would the mechanics work?  Perhaps, first of all, a successful 'attack' should be made on the part of the lantern wielder.

Starting with Moldvay's D&D and continuing with subsequent editions of 'basic', a 'Light' spell cast at a target's eyes would cause blindness for the duration of the spell (assuming the target fails a saving roll vs. Spells).  “In D&D BASIC rules,” the spell description states, “a blinded creature may not attack.”  This effect may be more severe than what a non-magical light would be expected to accomplish; yet it provides a precedent.  Edition 3.5 indicates that a “dazzled” character has an attack roll modifier (both melee and ranged) of -1.  Additionally, the Armor Class of a “blinded” character is detrimentally modified by 2 (and no Dexterity bonus is applied).  In fifth edition, attacks by a blind character “have disadvantage” while attacks against a blind character “have advantage.”  The fifth edition “condition” of blindness seems appropriate for our purpose.  But what about a saving throw?  For 'basic', like the 'Light' spell, a saving roll vs. Spells may be apt.  The 3.5E 'Sunburst' spell allows a Reflex save to avoid blindness whereas the same spell in 5E indicates a “Constitution saving throw.”  A blinded character is entitled to “another Constitution saving throw at the end of each of its turns” (to a maximum duration of 1 minute I suppose) in order to recover.  I am inclined to favor a Wisdom saving throw rather than Constitution, since Wisdom governs perception.

Depicted below is a lantern shield, a 'real world' weapon that incorporates a lantern for the purpose for blinding or dazzling an opponent.  It seems rather abundantly accessorized to be of much practical value, still they would not have been made if there was no demand for such things.  Seemingly, lantern shields were not intended for combat but rather intimidation.  Of course, in an elfgame, there is nothing to prevent a lantern shield from being a common piece of adventuring equipment. 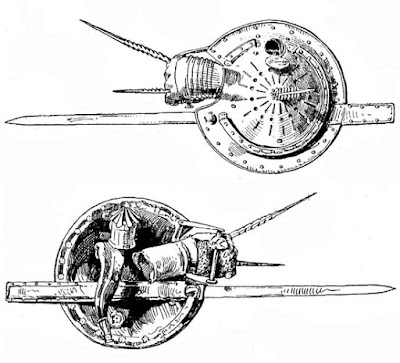 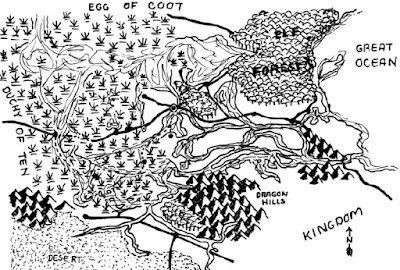 Tom Moldvay, in the introduction to his edition of Dungeons & Dragons, claims that “the game is most enjoyable when played by a group of four to eight people.”  Yet, with regard to number of players, the first little brown book states:  “At least one referee and from four to fifty players can be handled in any single campaign, but the referee to player ratio should be about 1:20 or thereabouts.”  This significant difference highlights an important distinction between new school and old school.  I have commented previously on this distinction.

Today, our concept of a role-playing game tends to correspond with the Moldvay paradigm – a gamemaster and five players (give or take a couple).  Each player controls a character and those characters comprise a more-or-less cohesive 'party'.  A campaign is focused on the party and is essentially is the 'story' of the party's adventures.

In 1977, Judges Guild published The First Fantasy Campaign, providing details about Dave Arneson's Blackmoor – the campaign from which Dungeons & Dragons developed.  At its height, Blackmoor accommodated dozens of players simultaneously; however, Arneson stated in a 1981 interview (published in the premier issue of Pegasus), “I usually prefer to run adventures with about four or five people.”  An old school campaign encompassed more than a single adventuring party; it was a shared environment.  Occasionally, some player characters would cooperate to loot a dungeon but at any given time, different player characters would be involved in various activities, sometimes at cross purposes.  Other early games, such as En Garde, exemplified this sort of 'shared environment' concept.

Today, we would call it a “sourcebook,” but in those bygone days The First Fantasy Campaign (hereinafter FFC) was considered a “playing aid.”  (The map shown above comes from this publication.)  The book enlightens us about what player characters did in the proto-D&D setting.  Blackmoor was a frontier region, uncivilized and essentially unexplored.  Aside from dungeon expeditions, player characters could explore wilderness areas, construct strongholds, and raise armies.  Dungeons & Dragons provides rules for these activities, but as the editions have progressed, less emphasis has been placed on such things.  Yet Blackmoor characters had even more concerns, not the least of which was spending the voluminous wealth taken from the dungeons.

In the introduction to FFC, Arneson writes, “Character motivation was solved by stating that you did not get Experience Points until the money had been spent on your area of interest.”  FFC details seven “interests.”  Motivation consists of the various scores a character has among these interests; the higher the score, the better the 'exchange rate' of gold-to-experience the character has.  For instance, a character with a SONG score of 70 gets experience equivalent to 70% of the amount of gold pieces spent on that interest.  A character's interest scores are determined based on class and/or dice results.  The seven interests are:

WINE – The character purchases a quantity of “Spirits with a relatively high Alcoholic content.”  The character imbibes “to the limits of his capacity.”  Upon recovery, the character continues to drink.  This process continues until the purchased amount beverages is consumed (or, I suppose, until cirrhosis fatally affects the character).  “Experience gained while drunk does not count but treasure does.”

WOMEN – “The player will immediately proceed to the local establishment and expend all funds desired on Room plus Extras at that place.  Slaves of the appropriate type (left to player) may also be purchased with the funds and utilized to fulfil this classification. These slaves may then be sold at reduced value...”  This is one of the dark spots of Blackmoor.  On page 5 of FFC, we learn that the annual upkeep of a “Red” female slave is 25 to 130 gold pieces; for a “White” female slave, upkeep is 35 to 250 gold pieces.

SONG – At “the local tavern,” the character pays for the exploits of other player characters.  “Damages assessed by the tavern owner count...”

WEALTH – “Merely the stockpiling of Gold, Silver and similar items of value by the player. If these items are stolen, the player loses full value immediately upon discovery and may lose levels as a result.”

FAME – “This is gained by straight combat with creatures and players in the game.”  I suppose the character doesn't actually need to be victorious; however, there must be one or more witnesses to the event.  Experience is not awarded until a celebration takes place at a tavern.  (The cost of the celebration may be paid by someone else.)

RELIGION – “Funds are given to the local Religious denomination...”

HOBBY – “This is a catch-all category left to the Judge to award details on to the players.”  A Magic-User, for example, could have Spell Research as a hobby.  Other possible hobbies include “the devising of better Torture machines, making Gold, the Building of Flying Machines, all up to the Judge to outline and define within the limits of his campaign.”  Other examples are studies of animals, learning written and spoken languages, and “Researching old books to find leads to ancient treasure or magical libraries.”  Arneson notes that a hobby could lead “to additional adventures as players would order special cargos [sic] from off the board and then have to go and guard them so that the cargo would reach their lodging and then the player would get the Experience Points.” (original emphasis)