Five years ago, your humble host published two posts (here and here) providing examples of what pages in spellbooks might look like.  Below are nine more examples derived from 'real world' sources; however, not all of these sources are associated with magic in the real world.  As usual, Thoul's Paradise disclaims any responsibility for circumstances arising from the use or misuse of the following material.

Spells have to come from somewhere.  For a warlock with a “Fiend” patron, perhaps the “Fiend” possesses the body of the warlock and inscribes a new spell in the Book of Shadows.  How might such an inscription look?  Well, a 17th century nun was said to have been possessed by the Devil himself.  Of course, having possessed a nun, Satan indulged in the scandalous behavior of writing a letter.  This is the result.  Presumably, a warlock would know how to decipher it but then again, Old Scratch might just be playing a prank.  Seriously, can you trust someone known as the Prince of Lies? 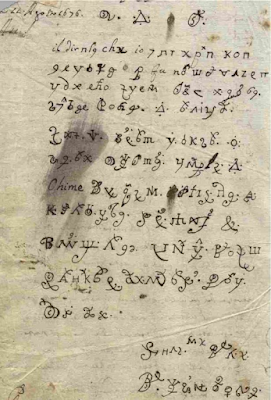 Speaking of the Devil, the cover of Secrets of Black Art makes some bold promises, but does it deliver?  If it were legitimate, wouldn't it be Secrets of ye Olde Black Art ?  In actuality, the first half of the book is a hodgepodge of topics like mesmerism and folk magic written in the Victorian era.  A clever spellcaster might use this cover for his or her actual spellbook; anyone coming across the tome would assume it was useless in terms of genuine magic and disregard it.  The second half of the book is a novelty item catalog, which stands to reason given it was published by a company that sold novelty items.  If we assume that Secrets of Black Art somehow imparts magical abilities to its owner, perhaps the 'novelty items' are material components. 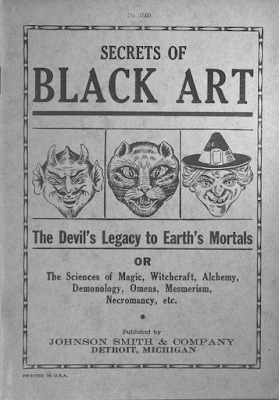 Speaking of spell components, when dealing with eldritch energies, every nuance is important.  A finger quivering incorrectly may effectuate an undesirable result.  (“...hand movements are usually required in order to control and specify the direction, target, area, etc., of the spell effects.”  – DMG 1e, p. 40)  As such, spellbooks should address somatic components.  Here we see notes on thumb rotation – and none of that high-falutin' theory, just honest-to-goodness praxis.

Each spellbook has a “unique system of notation used by the wizard who wrote it.”  Not only are spellbooks encrypted, but they must convey abstruse information.  Wizards might express such knowledge in imaginative ways.

'Pattern poetry' presents different 'layers' of information to those in the know.  This method may be an efficient means for a wizard to encode the various particulars of a spell.

Esoteric imagery may be a useful way (or perhaps the only way) to impart thaumaturgical concepts.

This next page has a hole.  Is it due to wear and tear of an adventuring spell caster's lifestyle?  Or was the name of an ultramundane entity written on this segment of parchment?  An entity so horrific – so abominable – that its very name is rejected by our reality?

Sometimes spells written in or on items other than spellbooks.  Here is how a spell scroll might appear.

In a previous post, we explored the possibility of spells being recorded on alternative media.  A lazy wizard might want to forgo a spellbook altogether.  Why bother with tediously turning pages when you can just inscribe all of your pertinent spell information on your staff?  It will never leave your side; security and convenience both.