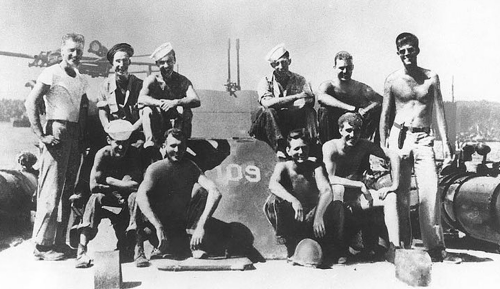 Many role-playing games of the early 80s offered a Gamemaster Screen as an accessory and TIMEMASTER™ is no exception.  However, in its case, the proper name is Timemaster Screen.  I guess they thought 'Continuum Master Screen' had too many syllables.  The screen itself is three panels of cardboard.  The CM's side has a black & white Action Table and various tables of movement and combat modifiers.  It conveys pertinent information capably.  How may wound boxes does a medium horse have?  13.  Helmets have what Immunity Type?  B.  How many rounds does it take for a specialist to reload a crossbow?  10.

The players' side is not as fulsome.  On one panel is displayed the skills chart which is useful when creating characters.  However, in the Travellers' Manual, the skills chart extends over two pages.  To condense the chart to one panel, some information was removed; specifically, the 'Date Avail.' column is absent.  Yet the Notes related to that column are still displayed:

This is somewhat simplistic.  It's not as though horses were immediately available throughout the Americas as of 1521.  What about places other than the Western Hemisphere?  Horses weren't in Japan until the late Yayoi period and they didn't reach Australia until 1788.  This defies the notion of “any non-American.”  Sometimes it's better to forgo detail and prevail upon common sense.

The other two panels of the players' side are actually the front and back covers of the product.  Some of the back copy reads:


The TIMEMASTER™ Screen puts the important charts and tables from the TIMEMASTER game right at the CM's fingertips.  Inside you'll find four blank character sheets and MISSING: PT 109 – a high-action mini-adventure that features new rules for combat at sea. 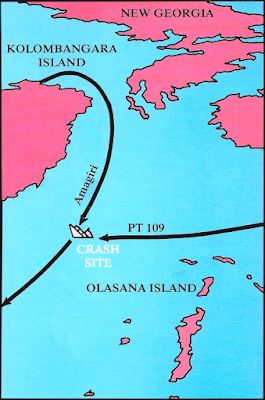 As usual for Gamemaster Screens, a “mini-adventure” was included as an additional feature.  Design of the mini-adventure is attributed to TSR veteran Carl Smith, who is also credited with 'Additional Design and Development' in the Travellers' Manual.  Smith's name appears on the front and back covers.  The top of the back cover reads, “TIMEMASTER™ SCREEN by Carl Smith.”  Presumably, this refers to the mini-adventure, not the screen itself.  A significant portion of the back cover is devoted to a map (shown left).  Unfortunately, it's not needed for the adventure and lacks important details like 'scale' and 'north'.  Otherwise, the back cover has some teaser text describing the Amagiri - PT 109 incident.  This is followed by a notice that Nixon was elected in 1960, suggesting some sort of cause and effect relationship.

The much vaunted “new rules for combat at sea” are attributed to Mark Acres and they occupy one entire page.  As opposed to the scale for land combat, naval combat has hexes of 300 yards and each turn represents a minute of time.  Of note are rules for new weapons (like torpedoes) and naval vessel damage (one possibility is “Hull hit; ship will sink in 2d10 hours unless repaired”).

Two-thirds of the last page of the booklet is devoted to credits and two pre-generated characters:  Timothy O'Malley (an Irish veteran of World War I) and Michael Whitehorse (a Native American of the 19th century).  This leaves 6⅓ pages for the mini-adventure.  A special rule for Stealth is included “that is not a regular part” of the TIMEMASTER™ rules.  “Throughout the adventure,” we read, “characters may use this skill for the benefit of the entire party, not just themselves.”

In the Time Corps briefing, the player characters are informed that John Fitzgerald Kennedy died in 1989 and was an “Oil magnate whose dealings with Third World countries contributed to the decay of the Western economies.”  They also learn, “The Sentinel reports that Kennedy's life is pinpricked with a slew of Demorean contacts.”  Apparently, the Sentinel determines that the “Demorean penetration occurs on Olasana Island, just before the crew of PT 109 arrives.”  So, the player characters – in the in the guise of U.S. Navy personnel – go to “the Soloman (sic ) Islands” on August 4, 1943.  “Another Time Corps team has left a PT boat” for the player characters to pilot to Olasana Island before Kennedy and crew encounter the natives that will bring about their rescue.  Supposedly, “under the most likely conditions [the player characters] will have one day” to disrupt the Demorean plot.

The Demoreans have established a faux Japanese POW camp on Osalana Island.  If the player characters are defeated in the combat encounters, the Japanese will take them to this camp.  How do the Japanese know about this camp given that (1) it was established “just before the crew of PT 109 arrives” and (2) it is not a legitimate Japanese facility?

Kennedy is unconscious in the POW camp as one of the Demoreans attempts to “Dominate” him.  Domination is one of the Demorean paranormal talents.  “To use this PT,” the Travellers' Manual states, “a Demorean must first spend one full day near his victim...”  If the Demorean successfully uses the talent, then domination over the victim progresses in stages.  At Stage 5, “The victim follows any suggestions or plans the Demorean gives him.”

If the player characters fail their mission, history is altered in various ways.  One possibility is that “Japanese domination of the world automobile market is delayed five years” because one of the soldiers killed “would have become a top automotive engineer.”  In the worst possible outcome:


The end of World War II is delayed by six months, allowing the U.S.S.R. to enter the war.  Soviet expansion in the Pacific is checked during the Presidency of John F. Kennedy, but proceeds apace after his death in 1963.  A major war over Pacific holdings erupts in 1969; the nuclear holocaust of 2054 occurs in 1970 instead.

Significance Waves and the Sentinel


Timetricks – mentioned in a prior post – was a TIMEMASTER™ supplement published in 1985.  With a subtitle of A Survivor's Guide to Time Travel, Mark Acres receives sole writing credit for the book.  The back cover clearly states, “Designed for use with the TIMEMASTER® game system.”  However, the preface suggests there may be readers “who are reading the book primarily for their own enjoyment...”  Such readers, “as well as those who are reading the book the first time to gain an overall familiarity with its contents,” are advised to skip the Continuum Masters' instructions, which “are always separated from the other text by a line of asterisks.”

Among other things, Timetricks explains the phenomenon of Significance Waves.  When a simple change to history is made, “The effects...occur instantly at all points on the Parallel futureward of the change.”  However, “Changes in events with a Significance Rating greater than 250 may cause a Significance Wave.”  (Original emphasis.)  Significance Waves manifest as a result “two tendencies in nature oppos[ing] one another:  the natural tendency for change to affect an entire Parallel instantly, and the Law of Preservation – the tendency of a Parallel to resist and/or repair historical changes.”  The probability of a Significance Wave occurring is...

Said waves “can be thought of as a series of historical changes which, instead of occuring [sic] all at once, gradually move futureward, while hours or even days pass at Time Corps HQ.”  The existence of a Significance Wave does not necessarily result in severe historical alteration.  “It is possible,” we learn, “that the Law of Preservation will eventually compensate for the wave’s effects.”  A Significance Wave will propagate for an amount of time in years equal to ten times the Significance Rating of the precipitating event.  So, the ramifications of preventing the Dunkirk evacuation would persist for three thousand years (300 × 10 = 3000).  “Three thousand years futureward of the event,” we read, “history will return to 'normal.'”  For every 'Standard Dating System' day that passes at Time Corps HQ, a Significance Wave will “roll forward” a number of years equal to the duration of the wave divided by a random number between one and ten.  In the Dunkirk example described above, “the Significance Wave...would move forward on the Parallel with a speed of anywhere from 300 to 3000 years per SDS day.”  It is possible for Time Corps agents to outrun a Significance Wave and “do something to stop its effects.”  Timetricks claims, “In this way, the effects of some major changes can be prevented from reaching 7154 or points futureward and wiping out the Time Corps.”

Significance Waves may be detected “by means of Paranormal Memory reports or by a report from the Sentinel.”  With regard to the Sentinel, the Travellers' Manual states:


Nearly every Time corps mission stems from an incoming report of alien or renegade action along a Parallel.  The Sentinel, who was one a time agent, too, makes most of these reports.  From his position in the Out-time, he can watch all existing Parallels at once, and notice any travelers.  But the Sentinel occasionally gets lost in his own philosophical musings and we lose contact for a while.  During those times, an agent may report a historical change before we hear anything from the Sentinel.

Timetricks goes into more detail about the Sentinel:


When it became obvious to the Corps that the Paranormal Intelligence Division had to have more help in detecting Demorean activity, a research program was undertaken which resulted in the Sentinel’s current posting.
The Sentinel’s human consciousness was actually removed from his body and shot into Out-Time. There, it maintains itself as a living, timeless being, able to observe all history on all parallels at once.
Of course, the shock of this transition was great. It was several years before the Sentinel telepathically contacted the Corps and began to report regularly on Demorean and renegade activities.  Now, the Sentinel’s reports are frequent, but not always complete or completely reliable...

Little else is told about the Sentinel, but the Guide to the Continuum mentions that the Sentinel – presumably when he still inhabited his body – “rubbed elbows with all of the philosophers and statesmen” in Athens of the 5th Century B.C.

“Out-Time” is also spelled “outtime” and, as shown above, “Out-time.”  Aside from its association with the Sentinel, the Out-Time is referenced in regard to the travel of chronoscooters.  If a chronoscooter disintegrates while in the Out-Time, its pilot is left “adrift in the eternal void” which is “the equivalent of character death.”  Apparently, the Sentinel is unwilling or unable to help out in such a situation.

Anyway, experiencing the passage of a Significance Wave is comparable to existing within a Philip K. Dick novel:


The imminent arrival of a Significance Wave into a time period frequently seems to set off a rapid series of seemingly chaotic events.  It is as if the wave itself sent out small 'shock waves' a few days futureward of itself in order to announce its coming.  These 'shock waves' signal that the Parallel is about to change from the way things are historically to the way they will be after the Significance Wave passes through.  These chaotic events can be witnessed only by someone present in the Parallel at a point just futureward of the lead edge of the wave.
For example, suppose a Significance Wave effect were to reverse the results of the 1984 American presidential election, and that the wave itself would continue into the 1990’s.  People living in, say, June of 1985 while the wave was approaching might find some strange things happening:  the sudden, unexpected resignations of President Reagan and Vice-president Bush; an emergency session of the Congress called to amend the Constitution, state legislatures convening in emergency session to ratify the amendment, election of Walter Mondale to the Presidency by the Congress, and so forth.  Of course, a witness in this chaotic time will not remember these bizarre events once the wave has reversed the election results; instead, he or she will remember Walter Mondale’s victory in November 1984 (that is, unless Paranormal Memory indicates otherwise).

Posted by perdustin at 1:52 PM No comments: