The Laws of Time Travel 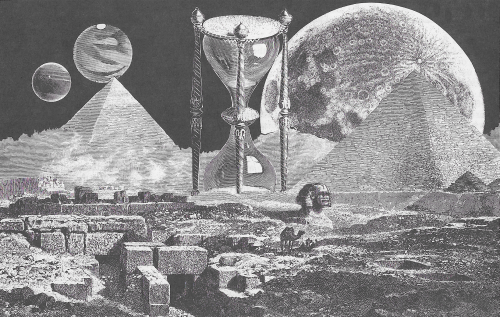 The Time Corps is not beholden to the dictates “of an outside government.”  However, the corps is subject “to the greatest force of all: Nature.”  With regard to Nature, Commander Watkins claims, “She binds us within the laws of the Continuum, and we must obey her to survive.”  As far as time travel is concerned, Nature enforces the four basic laws described below.

The Law of Identity:  A time traveler cannot co-exist in the same time and Parallel as his or her past self.  Any attempt to do so will cause the traveler to “suffer the dreaded 'loop trap.'”

For example, let's say you put on your best Castleton T-shirt and go back in time exactly 242 years prior to the publication of this post.  You observe the Battle of Hubbardton and return to the present.  You had such a good time, you decide to go back.  “Instantly upon arrival,” we learn, “you begin to relive your first trip.”  You have the same experience as you had before, making the same decisions, even to the extent of returning to the present and then going back to 1777.  This continues ad infinitum.  Technically, you don't realize you are in a time loop, so “you can never break the loop.”  However, “another time-traveler can pull you from this horror, provided he knows your location.”

The Timetricks supplement introduces a device called a 'Loop Trap Avoidance Field Generator' which allows an agent to circumvent this law to an extent.  With a looper (as it is called) a person may “jump into a Parallel at a time when he’s already there, and take any actions he wants, including talking to himself.”  With regard to a looper, “there is a 50% chance the thing will fail, which would involve the user in a loop trap.”

The example in the Travelers' Manual assumes the traveler goes back to the same time and place.  What if, after your Hubbardton expedition, you check out the re-capture of Fort Ticonderoga and inadvertently stay longer than you intended.  On July 7, are you automatically teleported to Vermont to relive that prior experience?  In another scenario, what if you wanted to hang out with Guillaume Coustou (the Younger) during the week prior to his death and you try to arrive in Paris while the Battle of Hubbardton is being fought?  Do you instead wind up in Vermont without any knowledge of your intent to visit Coustou?  So many questions...

The Law of Preservation:  'Nature' attempts to minimize the effects of changes to a timeline.


For instance, if Abraham Lincoln is killed while very young, someone else a lot like Lincoln may be born, elected President, even assassinated in 1865.  Unfortunately, the more severe the change, (or series of changes) the less likely the timeline is to recover.

This law addresses the grandfather paradox:  a traveler's “own actions will never result in his or her non-existence in the future.”  No matter hard you try, you cannot cause the death of one of your ancestors.  One supposes that, once your parent is conceived, it is possible for you to dispose of the appropriate grandfather.  Of course, “Nature does nothing to prevent another time-traveler from killing off your ancestors.”

The Law of the Time Barrier:  Not all points in the future are accessible.  The point at which no future travel is possible is the Time Barrier.  For Parallel T-0, the barrier is at A.D. 7192.  However, the barrier constantly moves forward.  “With every breath, every second, new time becomes a reality,” we read, “and the barrier advances.”  'Standard Dating System' (abbreviated SDS) refers to the passage of time as the T-0 Time Barrier moves forward.  As one spends time in the past, time continues to flow at Time Corps HQ.  One hour spent in the past of T-0 equates to the passage of one hour at Time Corps HQ.  However, the time flow may be faster or slower in other Parallels.  For instance, on Parallel R-17 . . .


. . . the rate of time flows considerably faster, agents on that Parallel experience or feel the passage of three hours, while only one SDS hour passes at Time Corps HQ.  Similarly, there are Parallels where time flows much more slowly than on T-0; on these Parallels, a full SDS day can elapse while you’re ordering a cup of coffee in a restaurant. [emphasis in original]

The Law of Death:  The death of a time-traveler cannot be prevented by traveling to the past and altering events.  “We do not know the reasons why,” the Travelers' Manual states, “we can only guess that it stems from the nature of time-travel itself.”

The Timetricks supplement posits an example.  Two agents, Jack and Flavius, travel back in time on a mission.  Upon reaching their destination, they find a note written by Jack.  According to the note, Flavius will be killed twelve hours hence.  After said death, Jack travels to two hours prior to the time he and Flavius arrive.  He then leaves the note.  “Standard Corps courtesy requires that when an agent dies,” we learn, “someone hop pastward to let him know his time is just about up.”  Upon learning of his impending and immutable demise, Flavius opts to “abort [his] mission and return to HQ, where [he] can enjoy certain special facilities until the hour of death arrives.”  It doesn't matter that Flavius avoids the time and place of his murder, it is ordained that he die.  Presumably, Jack could travel back and eliminate the person who kills Flavius before he kills Flavius, but it doesn't matter – Flavius is doomed.  We learn that:


Every Operations Division of the Corps maintains a small hospice facility for the care of agents who know they are about to die.   As a general rule, agents who report to the hospice facility may have their every whim granted.  Psychological counselling is also available for those whose expected life span is greater than a few hours.

Instead of utilizing the hospice facilities, an agent scheduled to die is permitted to enjoy “recreational” time travel.  This means an agent can take a one-way trip to the destination of his or her choice to live out the rest of his or her time.  He or she is “obligated to observe all normal mission precautions up to the time of his death.”  Otherwise, the agent is free to do anything he or she wants – “the Corps figures that at that point, you’ve earned about whatever you can get from this old Continuum.”

Now, if I was a Demorean, I would be inclined to leave notes for Time Corps agents indicating the ensuing demise of one or more of those agents.  Perhaps, when it is realized that the agent really isn't slated to die, the Time Corps can relay a countermanding note.  Yet, by then, the damage to morale would be done.  How could an agent be certain that any given death note – or countermanding note – is legitimate?

Posted by perdustin at 6:04 PM

Email ThisBlogThis!Share to TwitterShare to FacebookShare to Pinterest
Labels: Timemaster