“Creating a character is a matter of several simple steps,” page 8 of the Legionnaire rulebook states, “It is important that these steps be followed in their listed order.”  The first step is determining primary attributes.  By rolling 2d10 for each value, we obtain the following results:

As a reflection of his low intellect, we will call this character Stultus.  An intelligence value of only 6 presents an obstacle for generating a well-rounded character because each career path requires a minimum IQ of at least 8.  Although he cannot engage upon a career, Stultus can still acquire 9 points of skills (i.e., IQ value + 3).  Stultus will be 21 years old (i.e., [skill points / 2] + 17).

Each skill has a prerequisite intelligence value, so the number of skills available to Stultus is necessarily limited.  With nine points we can purchase nine skills at one level each.  From the IQ 2 skills we choose Archery, Blade, Brawling, Knife, and Laser Firearms.  From the IQ 3 skills we choose Projectile Firearms, Swimming, and Wrestling.  Finally, we choose a “Career Skill” from the IQ 6 skills.  Career Skills “cover any sort of job that can be performed by a semi-intelligent creature” (but not jobs covered by other skills).  We may as well specify 'RPG Designer' as Stultus' Career Skill.  Anyway...

Another round of dice rolling provides us with the following values:

We'll call this character Septimus Aquilae.  In Legionnaire, there are two types of career paths, military and intelligence.  For Septimus, we shall select Insurgency / Counter-Insurgency Agent, one of the intelligence paths.


The Insurgency / Counter-Insurgency agent is effectively a blend between a well trained soldier and a deep cover agent.  In the insurgency role this agent is capable of raising, training and leading a resistance group on an enemy occupied planet.  As a counter-insurgency expert this character is capable of meeting a guerilla group on their own terms and defeating them.

This career requires a minimum IQ of 12 and a minimum DX of 10.  The skill point cost is 12 and it adds six years to Septimus' age.  He acquires the following skills:  Ambush, Communications (P-Comm), Demolitions, Drop Pod Operations, Environmental Survival (choose two), Leadership, Martial Arts (choose one), Negotiation, Projectile Firearms, Scavenger / Tinker, Security Tech, Stealth, Support Weapons, Tracking, and Training.  P-Comm refers to “Phase-Polarization Communications System,” a method of faster-than-light communication.  For the Environmental Survival options, we'll choose Urban and Temperate.  (“Urban Survival covers the savvy and streetwise skills to survive in the rougher urban areas of a world.”)  For Martial Arts, we'll select Karate.  With Septimus' remaining three skill points, he gets one level each in Tactics (Ground), Medtech, and – given his high Charisma – Swindling.

Although 'rank' is not recorded on the character sheet, one must determine rank as part of a character's career duration.  For intelligence careers, we roll 2d10 and consult Rank Table 6.  A result of 16 means ten 'points' of rank; equivalent to a rank of lieutenant in the Commonwealth armed forces.  Septimus must 'earn' ten rank points by rolling on the Previous Experience tables.  Each pass through the tables adds a year to the character's age.  Each result has instructions to follow and a line or two of flavor text “descriptive of a uniformed soldier's life.”  Before each pass, a player must choose two skills (first and second choice) and two Primary Attributes (first and second choice) that may be improved.

For Septimus' first pass we'll choose Dexterity (1st) and Agility (2nd) for attributes and Projectile Firearms (1st) and Security Tech (2nd) for skills.  (Previous Experience charts cannot improve an attribute values beyond 18, so we may not choose Charisma.)  The first roll is 8 (“You put the year to good use, working hard at your training.”):  both skills improve but no rank points are received.

For the second pass, we'll keep the same attributes but choose Leadership (1st) and Negotiation (2nd) for skills.  The roll is 18 (“Pressed into service in a position you do not normally occupy, you perform admirably.”):  the second choice skill increases by 2 and one other skill increases by 1.  “Other” skills are determined randomly.  Since Septimus has 19 skills, there are 17 possibilities.  We roll 1d20 and ignore results over 17.

For the third pass, we choose Ambush (1st) and Stealth (2nd) for skills.  The roll is 9 (“You've had a more exiting time watching clouds form than you did in this year of service.”):  1st choice skill increases by 1.

For the fourth pass, we choose Leadership (1st) and Medtech (2nd) for skills.  The roll is 4 (“You ran into unexpected trouble in a supposedly safe zone.”):  the second choice skill increases by 2 and one other skill increases by 1.  Also, 2 rank points are earned.

For the fifth pass, we choose Leadership (1st) and Swindling (2nd) for skills.  The roll is 4 again.

For the sixth pass, we choose Leadership (1st) and Tactics (Ground) (2nd) for skills.  The roll is 9 again.

For the seventh pass, we choose Scavenger / Tinker (1st) and Stealth (2nd) for skills.  The roll is 9 for the third time.  Bored yet?

For the eighth pass, we choose Training (1st) and Stealth (2nd) for skills.  The roll is 12 (“If boredom was an ore, you hit the Mother Lode this year.”):  the second choice skill increases by 1.  Is the game becoming self-aware?

For the ninth pass, we choose Training (1st) and Security Tech (2nd) for skills.  The roll is 6, which directs us to another chart, specifically 2B.  For this new chart, the roll is 12 (“Fighting to keep your rations down is the most battling you do this tour.”):  second choice skill and second choice attribute both increase by 1.  Also, 3 rank points are earned.

For the tenth pass, we keep the same attributes but choose Karate (1st) and Projectile Firearms (2nd) for skills.  The roll is 9 for the fourth time.

For the eleventh pass, we keep the same attributes but choose Training (1st) and Tactics (Ground) (2nd) for skills.  The roll is 15 (“An action in which you figured prominently made the media broadcasts.  You're a star!  More importantly, so were your superior officers!”):  Both skill choices increase by 1.  Five rank points are earned, meaning Septimus has reached his quota.  Also, the character earns a Prestige point.

Prestige is a “special attribute . . . developed by David L. Arneson, and is used with his permission.”  It “reflects a character's reputation among others in the Renegade Legion universe.”  Normally, Prestige is accumulated during play, but some points may be gained during generation through a character's family, military unit, or previous experience charts.

Another “special attribute is called the Edge and is a reflection of the intangible difference between true heroes and normal individuals.”  We learn that, “Each point of the Edge can 'buy' a new die roll during a game.”  A character begins with a number of Edge points equal to 2d10 – 13.  Septimus begins with –2 Edge.  He can acquire a positive Edge via experience.

This leaves us with: 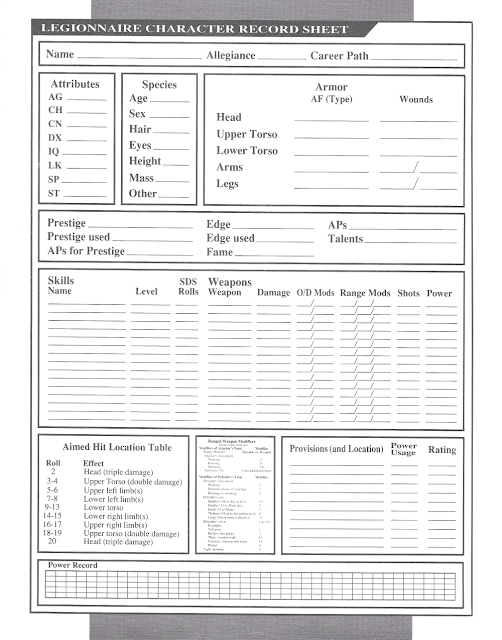 Posted by perdustin at 9:27 PM No comments:

In the battle between good and evil, this one counts!


In the '80s, FASA produced several games based on licensed properties and did so with reasonable success (other than that one).  FASA hoped to obtain the license to produce games based on the Star Wars property; however, the license went to West End Games.  This left FASA with the basis of a space battle combat system but unable to publish that system for the intended setting.  As such, FASA came up with an original setting.  The 'Renegade Legion' background is essentially the Roman Empire in space.  While Star Wars features a rebel alliance against an evil galactic empire, Renegade Legion has an alliance of humans and aliens (the Commonwealth) against an evil galactic empire (the Terran Overlord Government).  As a result of these opposing forces, we get the rather lackluster tagline, “In the battle between good and evil, this one counts!”

The first Renegade Legion product was 1987's Interceptor, a space ship war game.  FASA produced other war games for the franchise.  In 1990, FASA published Legionnaire, a role-playing game based in the Renegade Legion setting and compatible with the prior games.  Is 1990 too recent to be considered 'old school'?  It's thirty years old, but it's just recent enough for it not to be cataloged in Lawrence Schick's Heroic Worlds.  Cherished readers with a strong opinion one way or the other are invited to comment.  Regardless, Legionnaire certainly has some 'old school' connections.

Legionnaire was designed by Tunnels & Trolls stalwarts Michael A. Stackpole and James “Bear” Peters.  It is therefore not surprising there are similarities between the two games.  Legionnaire characters have eight Primary Attributes:  Agility, Charisma, Constitution, Dexterity, Intelligence, Luck, Speed, and Strength.  There are few differences from the Prime Attributes of the contemporaneous T&T rules.  Legionnaire separates T&T Dexterity into Dexterity (aptitude with “fine motor skills”) and Agility (aptitude with “gross motor skills”).  Legionnaire also has Speed, an attribute which T&T would adopt in later editions.

The “basic value” for each Primary Attribute is determined by adding the results of 2d10.  Alternately, a player may allocate 88 points among the eight Primary Attributes.  Using the allocation method, “No attribute can have a value below 5 or above 17.”

After Primary Attribute values are determined, players select skills for their characters.  The Legionnaire skill system approximates that which Stackpole developed for T&T.  Each character has a number of skill points equal to his or her Intelligence value plus three.  Each skill requires a minimum Intelligence value; as examples, Gambling requires at least 4 Intelligence, Cryptography requires at least 15.  Some skills also require minimum values with other attributes.  For instance, Escape Artist requires a minimum value of 13 in each of Intelligence, Agility, and Dexterity.

The basic mechanic for Legionnaire is to roll a number of dice and compare the total result to a specified number.  Exceeding said number indicates failure.  The specified number is either a character's attribute (for saving rolls) or an appropriate skill level added to an appropriate attribute (for skill checks).  Difficulty is expressed by the number of dice to be rolled.  Minimum difficulty is 1d10; extreme difficulty is “6D10 or more.”

Every two skill points represents a year of time which is added to a character's base age of 17.  However, we learn that, “A good background story for a character can be rewarded by granting the character a skill or two for free.”  Such a reward “should be limited to two skill points worth of skills.”

In the next post, we will continue our exploration of the Legionnaire character generation system.