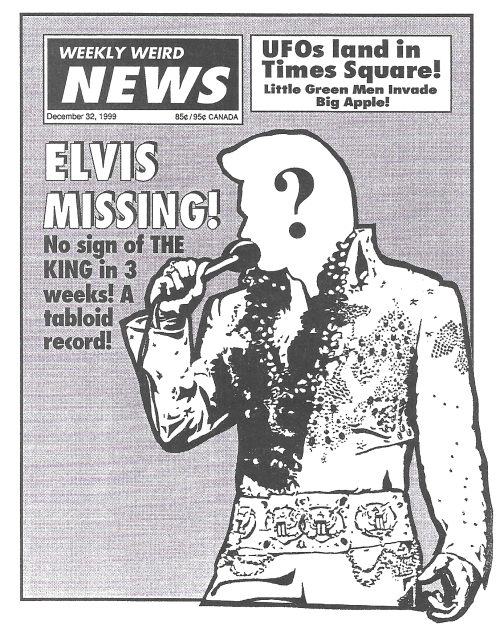 In the parking lot, parked next to the dumpster, is a 1976 Pinto.  The car sports a bilious green paint job, has a few dents in it, and shows signs of rust around the wheel wells... The interior smells of stale cigarette smoke, thinly disguised by an air freshener that looks like a plastic pine tree, which hangs from the rearview mirror.  The green vinyl seats are faded and worn, and you can feel the springs pushing up from below.

There are four “background” pages describing the offices and staff of the Weekly Weird News.  “This information may or may not be of use... in this Story,” but would be useful should the introductory Story become the basis of a campaign.  In any event, Elvis was last seen in a Milwaukee supermarket.  Helpfully, Pandemonium! supplies a “mileage chart” indicating the distance to Milwaukee.  We learn, “Describing the entire trip to Milwaukee would be both time consuming and incredibly monotonous.”  Instead, an Editor should play out “a handful of short encounters and events designed to give the players something interesting to do until they get to their destination.”  Pandemonium! categorizes such encounters as either information, obstacles, or ambience.  Of course, nothing proscribes any given encounter from combining more than one category.

In Milwaukee, player characters have opportunities to cultivate clues and may even be presented with a false lead regarding Spike, teen-aged assistant manager of the supermarket where Elvis was last seen.

Spike may look and act like a Satanic Cultist, but he's not.  This is a false lead intended to throw the [player characters] off the trail.  However, he is a member of a weird group of guys who get together to eat potato chips, drink pop, and play a game in which they fantasize about running around in dark dungeons crawling with demons and dragons.

Ultimately, Elvis may be found in an abandoned garage.  He is the captive of Replicants.  According to the Encyclopedia Paranormal...

Replicants are artificial life-forms created by Martians.  They can be made to resemble ordinary humans or other sentient races, as desired.  On the surface, Replicants are indistinguishable from 'normal' individuals, though they tend to speak and act a little like robots.

Replicants have no real emotions, though they may be programmed to emulate 'typical' human emotional responses, in which case they will do so badly, and without subtlety.  They have no conscience or moral values, and are incapable of independent thought.  If cut-off from Martian psychic control, a Replicant will freeze in place, awaiting further commands.

If the player characters rescue Elvis, he can help “kick some Replicant butt.”  Pandemonium! emphasizes the King's purported martial arts skills.  The Encyclopedia Paranormal goes so far as to present Elvis' TCB Oath:

Words to live by.

So, what's the Martian plot?  The player characters do not receive a definitive answer but, if asked, Elvis supposes they wanted to force him to record “some kinda alien record with a buncha subliminal messages hidden in the mix.”

Should a player character query Elvis as to why he faked his death in 1979, the King replies:

Posted by perdustin at 9:26 PM No comments: