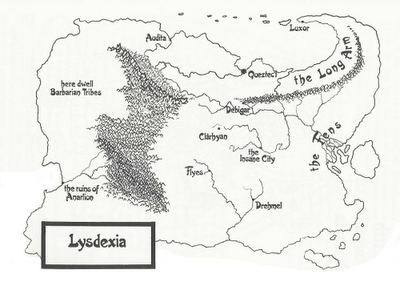 On page 119 of High Fantasy, included in the background section of the solo-adventure Escape from Queztec'l, we are treated to a map of a continent.  No credit is given for the map but, as a whole, the solo-adventure is attributed to Craig Fisher.

As we can see, the name of the continent is Lysdexia.  This is doubtless an attempt at humor by switching two letters in dyslexia.  Such humor would not fly in our politically correct day and age, but in the era of the Old School, making fun of the less fortunate was commonplace.

There's not much detail, but it is more than enough for purposes of the solo-adventure.  The aptly named adventure takes place in the city of Queztec'l on the northern coast.  According to page 118:


Once Queztec'l was a regional capital of the Anarlinian Empire but that empire is long, long gone and even the subsequent Queztec'lan Empire is in a state of decay.

Once Queztec'l controlled nearly the complete northern half of the continent.  At the time of this story, however, the area governed by the city is only one-fifth of the size of the former domain.

You are Xenon, from a medium sized barony out on the Long Arm.  Although your lands have not formally been part of Queztec'l for centuries, you are still tied by a common language, religion, and customs.

Should someone want to employ the map for a campaign setting, there is a great deal of space with which to play.  (Just what is the scale anyway?)  Yet there are a variety of landmarks depicted to inspire the imagination.  (By the way, Queztec'l sits at the mouth of the Mezofari River.)

In the southwest quadrant of Lysdexia, there are “the ruins of Anarlion,” apparently the former seat of the great Anarlinian Empire.  The empire ceased to hold sway ages ago, but why would the city be abandoned?  Why would it remain abandoned after so long?  The ruins would seem to occupy a prime piece of real estate at the mouth of a major river and it wouldn't have been built in the first place if the position wasn't advantageous.

Also, why is the Insane City called thus?

The Various and Sundry Incarnations of Djacarta

or Religion in High Fantasy 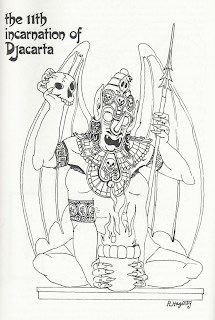 The following is from page 121 of High Fantasy.  This section on religion is actually part of the solo-adventure Escape from Queztec'l.  As such, I suppose it is attributable to Craig Fisher rather than Jeffrey Dillow.


The religion of Queztec'l is a form of ancestor worship.  Shrines are built up around gems containing the souls of departed nobility and clergy.  The faithful come daily to these gems, asking for knowledge, miracles, or just blessings.  The powers of the spirit in any gem varied considerably, but gem spirits have been known to cure, to kill, to prophesy, and to work other magics.  Eventually the lifeforce in these gems fades away and the gem becomes dark and empty.
Presiding over this panopoly [sic] of captured souls is Djacarta, the god of 66 incarnations, the god of changes.  Djacarta is not directly worshipped by the populace:  it is only in private temples and shrines that the priests and acolytes of Djacarta conduct services for their god.  Rather, the Queztec'lans see Djacarta as the Prime Mover, the power behind the spirits of their ancestors.  In many of the 66 incarnations, Djacarta appears as a male, in others as a female.
Queztec'l's descent from ancient Anarlion has left it with a heritage of strong magic, the almost innate ability to communicate with spirits, and a thorough knowledge of magical artifacts...such as gems...
Gems, of course, come in many different colors and shades with different colors denoting different properties.
The light purple (mauve) gems have the particular ability to hold the souls of dying men and to eventually allow these souls to focus their powers in many ways.  These are the Gems of Keeping mentioned above.
Another type of gem...is the light gem.  When activated, this stone will give off a steady glow for considerable periods of time.  Both of these gems, among many others, are an integral part of Queztec'lan life. 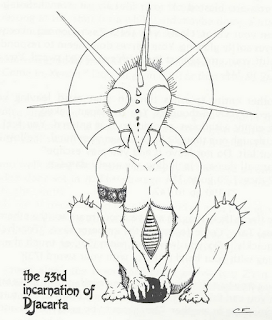 John Holland, in his The Realms of Atlantasia role-playing game, offers several monsters with names that sound familiar but which have an atypical spelling. I think that Holland has done this for reasons having to do with intellectual property. Anyone can have salamanders, but only Atlantasia can have salamandorrs.

Leetch (not to be confused with ‘leech’)
Actually, Holland confuses leech with leetch, using either spelling when referring to the same thing. ‘Soul Leetches‘ attach themselves to the base of the neck and feed upon Magic Source Points which “cannot ever be recovered.” ‘Brain Leetches‘ crawl into a person's ear and feed upon memories. Eventually all memories will be irrevocably lost, so the afflicted “will have to be trained for another career.” At least they get to keep their hit points life points.

Peridactyll (not to be confused with ‘pterodactyl‘)
“While many will automatically perceive a large reptilian bird, on Atlantasia a peridactyll is actually an enormous, hairy beast that lumbers across the tundra.”

Salamandorr (not to be confused with ‘salamander’)
Salamandorrs are anthropomorphic crocodiles. Although they use weapons, their bite does twice as much damage as a war axe on average. Their special attack is a “Death Roll (will take you to the bottom and roll over until you die).” No rules are provided to implement this attack.

Stalycyte (not to be confused with ‘stalactite’)
Stalycytes are cone-shaped entities that reside on cave ceilings. They spin webs upon unsuspecting prey beneath them. Stalycytes haul up their entrapped prey and then “secrete an acid that will eat anything non-magical and turn it in to a liquid that the stalycyte will drink for food.” Apparently, since stalycytes “glow red when seen through infra-red” they are warm-blooded. “There is [sic] only two things that will kill a stalycyte; a magical axe wielded by someone who can reach them, or by freezing them and then smashing them while frozen with a magical hammer.” I suppose throwing a magical axe isn't good enough.

Sychobyss (not to be confused with ‘succubus’)
“Sychobysses will appear to be beautiful, sultry women (5' 6" tall). In actuality, sychobysses are scaled, bat-winged serpents 2' - 4' long.” They use spells to attack but “if magical attacks fail, sychobysses will revert to true form, slither into cracks and disappear.” Men will never attack a sychobyss.

Trollip (not to be confused with ‘trollop’)
You won't find these irrepressible fellows on Gary's Harlot Table! Trollips are like trolls, but only one to two feet tall. Like trolls, they regenerate. “While severed appendages will not grow back, those that are cut off WILL regenerate a new trollip.” Fire isn't effective against trollips, but electricity can kill them. “The only other way to kill a trollip is to cut its head off.” (Does the head grow a new trollip?)

Mogul (not to be confused with ‘mound of snow’ or ‘tycoon‘)
Moguls “appear to be large balls of mud...rolling across vast areas of land.” In combat, they change to a humanoid shape. If the attack of a mogul connects, “you will be covered in a hardening mud that will slow you down at the rate of 1/2 your movements per ss.” Ha ha, the joke's on the mogul! Atlantasian characters don't have movement rates!

Posted by perdustin at 10:14 PM No comments: 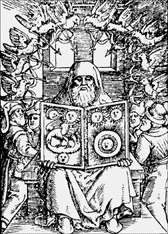 In fact, the book is a living entity that draws its life force from the wizard and is therefore attuned to its owner only. A book separated from its owner will actually die if the separation lasts over two weeks.

The relationship between the book and a wizard is so strong that when the wizard takes damage there is a chance that the book will be harmed also.

The chances are rather low that any given successful combat strike upon a wizard will harm his or her book, but with enough combat the odds become palpable. If a wizard is burned, damage to the spell book is almost certain.  Most damage sustained by a spell book is represented as a loss of pages.  Although not expressly stated, it seems that each page represents a spell.  So, if a wizard takes damage, it is possible that the wizard also loses spells.


While damage to a wizard could impose damage to his or her spell book, the converse does not appear to be true (other than the loss of spells).  I suppose that rules could be established whereby damage to a spell book automatically inflicts damage upon the associated wizard.  Perhaps such a rule would be too harsh.