Given its association with the Space Marines miniatures rules, one might reasonably expect the Space Opera combat system to dispense with simplicity.  One's reasonable expectations would be correct.

In Phase I, both sides roll 2d6.  The side with the larger result decides whether to be Side A (the mover) or Side B (the counter-mover).  In a six second turn, “a running man covers about 30m.”  Actions other than basic movement are 'functions' which reduce the amount of time a character can spend in movement (and which would presumably reduce distance covered).  For example, a 90° - 180° turn causes one second to be lost.  “Leave/enter most vehicles (per man)” has a cost of three seconds.


Actual combat (firing, etc.) does not depend upon having time to perform the function.  Rather, movement depends upon one's having the time left to do so.  For instance, if a PC intends to fire his weapon in the turn coming up, he must allow -2 seconds from his movement time if he also plans to move.

The percentage chance for a character to successfully hit a target with direct fire is derived mainly upon the character's firing stance and the distance to the target.  Various modifiers may apply.  With regard to small arms, “Each level of expertise adds 2% to the probability of hitting a target...”  So, the difference between someone with rudimentary skill and an Olympic level marksman is 18%.  Physical characteristics do not affect the chance of success, only the chance of increasing one's expertise.

In a melee phase, “each combatant rolls 1d20 (random factor), to which various modifiers will be added.”  In case you didn't realize, 1d20 generates a random result.  Characters attack in descending initiative order.  Page 39 informs us that a character's hand-to-hand capability for “Unarmed Combat, Quarterstaff, Clubs, etc.” equals “expertise + 2/5 (Dex + Agil + Str + Con + IQ) +2.”  A character's race and whether or not he is an armsman adjusts capability.  For instance, a human armsman has 110% capability; a human who is not an armsman has 80%.  An ursoid armsman has 200% capability; a non-armsman has 150%.  Hand-to-hand capability is apparently not the same thing as hit probability.  “All melee weapons have a basic 35% hit probability.”  The attacker's expertise adds to this chance; the defender's expertise subtracts.

In terms of armor, there are eleven categories of protective value, coded 'A' through 'K'.  'A' offers the most protection and 'K' the least.  There are three categories for any given type of armor:  one for melee damage, one for missile weapons and explosions, and one for energy weapons.  For example, chain mail is classified as H/H/I.  Every weapon has penetration values associated with the various armor categories.  Against 'J', the value of a hurled dagger has a value of 7.  This means a 7 or greater must be rolled on 1d10 in order for the target to be damaged.  We learn that, “When a living target is penetrated by a projectile, energy bolt, or melee weapon, wounds result.”

To determine the effect of a wound, 1d20 is rolled and the result is checked on a table according to hit location.  For humanoids, there are five 'levels' of wounds:  very light, light, moderate, serious, and critical.  (Non-humanoids have only light, serious, and critical wound levels.)  The wound roll may be modified by weapon type.  Brass knuckles cause a -3 modifier while a fusion machine gun applies a +5 modifier.  Anyway, a very light wound causes 1-3 points of damage.  A serious wound inflicts 9 - 13 points damage (or 8 - 13 depending on how one chooses to interpret the rules).  Aside from damage being applied to a character's Damage Factor, wounds can cause various effects: 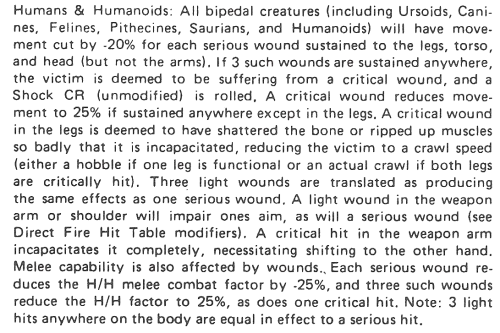 
Before continuing with the generation of the Astronaut we began in the last post, we may as well provide the character with a name.  In the grand tradition of Corvus Andromeda, I proffer Pavo Magellanic.

The 'Character Experience' section of the rules provides:


Without experience and expertise, the PC is totally unsuited to the demanding life of a Space Opera adventurer.  To acquire some experience and skill, the PC will enlist in a government or civilian service when he reaches the age of 18.

Unlike Traveller, “Initial enlistment in any of the services is automatic when a PC enters the game.”  However, an enlistment roll is still made.  Failure of the enlistment roll will inflict negative modifiers to promotion rolls during the character's career.  Among the service careers a character may engage upon are the StarForces – “the elite units of the StarFleet, Space Marines, and Special Services Commandos who guard the spacelanes from enemy attack, and who carry death and destruction to the enemy's home planets.”  Unfortunately, Pavo's Bravery score is less than the minimum required for StarFleet Astronauts.  It's just as well, they're a bunch of stuck-up elitists anyway.

Pavo must settle for the Merchant Marine, the enlistment roll for which is 10 or greater on 3d6.  Exceptional Personal Characteristics (which Pavo does not have) can modify the roll.  Regardless, Pavo succeeds.  Instead of rolling for re-enlistment, 1d20 is rolled to see how many two-year terms the character serves; the minimum number of terms is two, the maximum is fifteen.  A roll of 19 means Pavo has spent fourteen terms in the Merchant Marine and thus begins the game at the age of 46.  Per term of service, Merchant Marine Astronauts receive a promotion on a roll of ten or greater on 2d6.  Pavo manages to reach Rank Grade 3:  Chief Starshipman.

When a character is discharged from a career, 2d6 are rolled.  Pavo's discharge roll is 10, “meaning the PC resigned from the service of his last employer.”  An additional d6 is rolled.  A six “means that he's left his employer without proper notice and he has a -4 [dice modifier] when attempting to find a similar position.”  Pavo receives a severance of 23,520 credits and an annual pension of 9,408 credits.  Additionally, he has accumulated savings equal to:

(1% final year's salary) × (Intelligence) × (years of service)
which comes to 56488 credits.  Other benefits from the Merchant Marine include:  “Wristwatch; one complete Ship, Winter, and Summer Uniform; Side Arm; VibroBlade... Astronauts keep their Vacuum Suits and Astrogation Manuals.”

We learn that, “A new PC would be relatively incompetent and helpless in an advanced technological society if he did not have any specialized knowledge and skills to apply to the life of adventure he will undoubtedly lead.”  Also, “To reflect pre-service education and service training prior to a PC's entry into the game, he will be awarded a number of skill points or SP with which the player can make 'purchases' of desired skills.”  Pavo obtains skill points in three ways.  Every player character gets 6d6 skill points “which can be applied to the purchase of General Skills only.”  Astronauts also receive a number of skill points equal to the sum of “Constitution, Dexterity, Agility, 2× Intelligence, Leadership, Bravery, and GTA.”  Supposedly, “This yields a range of 7 - 133 SP.”  However, this is only true if Intelligence is not doubled.  Anyway, “Half of this number of SPs must be spent on astronautic and related skills (like flying), along with 5 SP × number of years of service before entry into the game.”  The results of the rolls and calculations follow.
6d6 = 12 SP
Constitution + Dexterity + Agility + Intelligence + Leadership + Bravery + GTA = 86 SP
5 × 28 service years = 140 SP
So, 12 SP for General Skills, 183 SP for “astronautic and related skills,” and 43 SP for any skills.  Competence in a skill is measured in levels of expertise, each level costs a number of skill points.  Most skills have a “maximum expertise of level/5 to level/10.”  Space Opera does not provide any pre-generated characters, nor does it have a start-to-finish example of character creation.  Because of this, we have no guidelines as to expertise levels of a  competent beginning character.  Astronaut Skills include:  Shipboard Procedure & Operation, EVA, Advanced EVA, Orbital Pilot, Combat Orbital Pilot, Interplanetary Pilot, FTL Pilot, Astrogator, StarShip Battle, and Space Armament.  Related skills (among which we may presumably include prerequisites) include:  (Advanced) Mathematics, General Physics, Astronomy, Planetology, Nuclear Physics, Force-Field Physics, Mech Engineering, Electrical Engineering, Computer Engineering, Power Engineering, StarDrive Engineering, Mech Tech: Starship Machinery, Electronics Tech: Starship Systems, Electronics Tech: EVA Systems, Communications Tech: ECM, Communications Tech: Communications Systems, Communications Tech: Sub-Light Systems, Computer Tech: various, Power Tech: Nuclear Generation Systems, Power Tech: Anti-Matter Generation Systems, Power Tech: StarShip Power Systems, StarDrive Tech: all specializations, Chemistry, (Advanced) Metallurgy.  Because Pavo was in the Merchant Marine, the Merchant skill also counts as related.

There are a vast number of skills, but Space Opera offers no templates or packages.  Pavo's skill points can be distributed in the following manner.

I'm a fan of the Hero System, so I'm not discouraged by a reasonable amount of number crunching.  Character creation in Space Opera, however, is tedious.  The Hero System (or GURPS for that matter) allows a player to design a character via allocation of points.  In Space Opera, the design aspect of character generation is hampered due to dice rolling, but considerable allocation of points is still required.  Character creation in Traveller may not permit many choices, but at least the process is entertaining as you observe fate take its course.

Edited 5/20/18 to reflect changes in skill information
Posted by perdustin at 11:12 PM 5 comments: