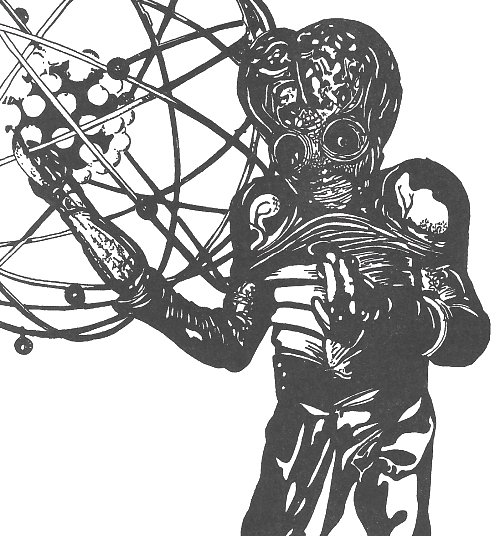 Pandemonium! provides am “Introductory Scenario” for first time players and Editors of the game.  The Story Section advises the Editor:

After you’ve finished playing this introductory scenario you may want to create more Stories of your own.  Optionally, you may want to throw this game out the window, and curse yourself for ever wasting good money on such a ridiculous piece of trash.

Presuming the game isn’t defenestrated, Pandemonium! offers the Instant Story Generator.  While one may argue about the validity of “Instant,” the Generator provides the Editor with the basic elements of any good Story: What Happened, Where it Happened, Who Did It, and Why.” (emphasis in original)  The Instant Story Generator “also helps the Editor create a number of incidents and encounters that could happen to the P.I.s during the course of their investigation...”

There is some overlap among the tables.  Using the Generator, an Editor can obtain, for example, “Mass Hallucinations” for both Manifestation and Major Phenomena.  Fortunately, Pandemonium! grants “Editorial License” which the game describes as...

– a colorful euphemism that basically means 'fudging the die rolls until you get what you want.'  In other words, Editors should feel free to alter, revise, warp, twist, or if all else fails ignore the Instant Story Generator die results anytime they don't like them.

Pandemonium! contains a sixty-two page section – about one-third of the total page count – called the Encyclopedia Paranormal.  Among other details, this section contains entries that provide information about many of the listings in the Instant Story Generator tables.  Within the environment of the game, the encyclopedia functions as an item of equipment for player characters.  “All sentient inhabitants of the Tabloid World universe recognize the Encyclopedia Paranormal on sight,” we read, “and may think twice before bothering any entity who is so enlightened as to carry a copy on his/her/its person.”  This statement is immediately qualified:  “Naturally, the authors cannot guarantee that this will be true in all cases.”

Cattle and other types of farm animals are the most common victims of this phenomenon, though household pets or strays may also be affected.  Victims typically show evidence of laser-like incisions, and may be missing body parts such as tongues, entrails, and/or reproductive organs.  Though the subjects will often be found to have lost a substantial amount of blood, the surrounding area will usually be devoid of bloodstains.

These occurrences may be attributed to such Mundane explanations as wild animals, or paranormal sources such as Vampires, Deranged Serial Killers, Satanic Cultists, or UFOs.

A result of 55 on the Location table refers to “Louisianna” (sic), about which the Encyclopedia Paranormal says:

Louisianna is another place that gets a bad rap in the tabloids, though not entirely without reason.  The bayous and parishes of Louisianna offer a melange of Voodoo cults, Hoodoo (a combination of Voodoo, European witchcraft, and Amerindian magic), Bigfoot kidnappings, Elvis sightings, close encounters with UFOs, and so on.  Plus there's the city of New Orleans, and all the weird stuff that happens around Mardi Gras time.

The listing on the Major Phenomena table for a die roll of 13 is Practical Joke Played by EBEs.  According to the Encyclopedia Paranormal:

EBEs (pronounced EE-beez) are Extraterrestrial Biological Entities who hail from the Betelgeuse galaxy (sic).  They are a technologically, if not emotionally, advanced race of beings who span the galaxy in flying saucers.  Standing less than four feet in height they are the original 'little green men' of popular folk lore.  The old legends of 'faeries' and 'changelings' may be attributed to these mischievous creatures, who've probably been playing humans for saps for thousands of years.

EBEs are inveterate practical jokers who love to play pranks on other life-forms.  Typical EBE 'jokes' include leaving fake Bigfoot prints in wooded areas, impersonating Elvis, scaring people by faking alien invasions or Abductions, leaving Crop Circles all over the place, creating phony miracles, and so on.

EBEs are not evil; they're just a pain in the neck.  They will never deliberately cause harm to other life-forms, though frankly, accidents have been known to happen.

If threatened, EBEs will defend themselves, using a peculiar type of stun gun that can be made to resemble any sort of harmless object or device – stun guns shaped like bananas, cameras, or pickles are especially popular with EBEs.  Once their pranks have been discovered or have had the desired result they will usually hop into their disk-shaped spaceships and head back to Betelgeuse, laughing all the way.

For Minor Phenomena, the Editor should “roll or choose at least 3 entries from this table...”  Rolls of 25, 36, and 81 correspond to the following:

Posted by perdustin at 10:43 PM No comments:

In a prior post, we learned that Pandemonium! characters die when any of their Attributes (Body, Mind, or Spirit) fall to –10 or below.  Specifically...

When Body is reduced to -10 or below:

the character lapses into a coma and faces the potential death of his, her, or its physical form.   Unless the character suffered a severe head injury the Mind will still function for as long as the character remains alive, as will the Spirit (though it will be preparing to leave the body en route to its next incarnation).  If the character recovers by Cheating Death, a Near Death Experience (NDE) will result, after which the character will return to life.  If no recovery occurs, it’s time to read the Reincarnation rules.

When Mind is reduced to –10 or below:

the character is unconscious, and in a catatonic state.   Autonomic functions (breathing, circulation, digestion) continue as normal, though the character will not regain consciousness until Mind Rating is restored to -9 or greater.

When Spirit is reduced to –10 or below:

the Spirit is immortal, and cannot die.  However, if this occurs the silver cord that connects the Body and Mind to the Spirit will be severed, causing the Spirit to leave the Body and drift into a part of the astral plane known as Limbo.  If the character’s Spirit rating is restored to -9 or greater within 24 hours, the Spirit returns to the Body. If not, it’s Reincarnation time.

We learn in the Cheating Death section, “Anytime one or more of a character’s Attributes falls to –10 or below the character must roll on the Fate Table to determine whether the victim kicks the bucket for good or makes a miraculous recovery just like they do in the movies.”  The Fate roll is modified by -1 for each Injury Point below -10.  For every five Instant Karma Points spent, the roll is modified by +1.   If the roll is successful, the character will recover.   “In addition,” we learn, “the character earns 5 points of Instant Karma for undergoing a harrowing Near Death Experience...”   Page 33 goes into more detail about Near Death Experiences:

During the NDE, the individual’s spirit leaves the body and moves toward a radiance called The Light.   This is accompanied by a feeling of great inner peace and tranquility. If the body survives its injuries, the spirit must return to it.   This ‘spirit journey’ and the resulting wisdom accrued from the NDE is worth 5 Instant Karma Points.

Assuming a character fails to cheat death, the next step is reincarnation.  When using the E-Z Rules, the player selects another pre-generated character; with the Very Complicated Rules, a new character is created from scratch.  In either instance, “Reincarnated characters retain all the Past Lives and Instant Karma points of their previous character – including the life of the recently deceased character, who now qualifies for Past Life status.”  The player selects “one of the deceased character’s abilities to serve as the Past Life trait.”  Additionally, “Like all Past Life abilities the ability to recall this Past Life starts at 0, and can be improved by spending Instant Karma points...”  Editors are advised to inform players, “Any player who deliberately offs his or her character for the sole purpose of Reincarnating and acquiring additional Past Lives is too un-Enlightened to be Reincarnated as a Walk-In.”

Once the new character is complete:

Have the Walk-In arrive on the scene somewhere in the vicinity of the other P.I.s as soon as it is convenient or expedient to do so.  The Walk-In can then introduce himself, herself, or itself and rejoin the group.

Once players are thoroughly familiar with the game, the Editor may decide “to make the Reincarnation experience more interesting for the players.”  For example, “...the Editor may decide that certain devious organizations and individuals would take advantage of a P.I.’s untimely demise and send a false Walk-In to infiltrate and spy upon the other P.I.s.”  As another example, the Editor could…

...make the player portray the dead P.I.’s disincarnate spirit as he wanders about looking for a suitable body to walk into.   Then he must persuade the subject to move on and let him take over.  There night be tricky ethical considerations here…

With regard to Walk-Ins, the Minor Phenomena section of “The Encyclopedia Paranormal” has this to say:

Walk-Ins are disincarnate entities that hail from the Sixth Dimension, Sirius, or another reality. These spiritforms travel to the earthly plane in astral form, and are invisible to all those who do not possess Clairvoyance or similar paranormal abilities.

Upon arrival the Walk-In will begin to search for the body of a corporeal creature such as an animal or human to occupy, so that it can better interact with a physical reality. Once it has found a suitable host the Walk-In requests permission to take control of its Body and Mind. In return for allowing the Walk-In to utilize the host’s physical form, the host’s Spirit is allowed to move on to a higher plane of existence.

Most Walk-Ins are highly Enlightened, and only inhabit the physical forms of other entities in order to use them for a higher purpose. They differ from Channeling Spirits in that they prefer to act rather than just talk. P.I.s who kick the bucket in the line of duty usually reincarnate as a type of Walk-In, which beats waiting around for twenty-odd years until a new body can grow to maturity…

At some point, a P.I. may want to fake his or her death:

To do so, you must inform the Editor that you want to arrange a Fake Death should the need arise. Your character will need to raise at least $5,000 to cover the requisite bribes that must be handed out to individuals such as coroners, funeral home directors, newspaper reporters, a petty bureaucrat or two, and so forth. You’ll also need a minimum of 25 Instant Karma points to cover the incredible amount of luck and clever planning needed to pull off a stunt like this.

Once these preparations have been made the stage is set for a Fake Death. Should your character appear to die during the course of a Story, the hoax begins – the bribes are paid, and the Instant Karma points surrendered.

Though it will seem as the your character has kicked the bucket, the death will be a fake. The ‘dead’ character can return to his or her own body whenever you desire, though to get the full effect a phony funeral is a nice touch.

There’s only one catch. Upon returning to the land of the living you’ll need to concoct a sensational story that will explain how your character survived, and why the Faked Death was staged.

Editors are encouraged to incorporate a player’s idea for a Faked Death “into the reality of their version of the Tabloid World universe.”

Posted by perdustin at 7:18 PM No comments: