Characters and Elements in Everway

Previously, we examined parts of the Identity Stage of Everway character generation; specifically, the concepts of Virtue, Fault, and Fate.  The remaining portion of the Identity Stage is choosing a name for the character, which “is not a trivial matter.”  However, “You may choose a name at any point in designing you hero.”  Names of Everway characters often “mean something in everyday speech rather than being merely traditional.”  Names of the pre-generated characters appear in a chart later in this post.  Choosing a Motive is also part of the Identity Stage.  Seven Motives are listed, but the reader is invited to “invent your own.”

Adversity:  “The hero is under some compulsion to walk the spheres.”

Authority:  “The hero is the hands, the eyes, the mouth, or the sword of some authority, such as a deity, ruler, or holy order.”

Beauty:  “The hero seeks to share or to experience that which is beautiful:  art, music, romance, poetry, aphrodisia, and more.”

Conquest:  “The hero lives for challenges and loves to exert power.”

Knowledge:  “The hero seeks knowledge to be found in new realms and new worlds.”

Mystery:  “The hero seeks no mundane goals but wishes to confront mysteries on other worlds.”

Wanderlust:  “The hero wanders the spheres with little or no care for a purpose.”

Stages that follow the Identity Stage involve an allocation of elemental points.  Players have twenty elemental points to spend on the Powers, Elements, and Magic of their characters.  Elements are the “basic aspects” of a character – what would in other games be called characteristics or attributes.  In Everway, these basic aspects correspond roughly with the four medieval humors.  Rather than have attributes like Phlegm and Yellow Bile, Tweet wisely named these aspects after the four classical elements.  Elements have ratings from one to ten, with a one meaning helplessness and a ten meaning a godlike level of ability.  Player characters have a minimum rating of two and a maximum rating of nine.  We learn, “An average hero's scores are usually between 4 and 5...”  An average background character (i.e., non-player character) has only twelve elemental points to allocate, “so a well-balanced average person has a score of 3 for each Element.”  The Elements and their meanings are:

Earth governs a hero's health endurance, fortitude, will, determination, and resilience.  Heroes with strong Earth scores can withstand damage, shake off the effects of poison, and resist magic.

Water governs intuition, sensitivity to that which is unseen and unspoken, receptivity, psychic potential, and depth of feeling.  Heroes with strong Water scores are good at sensing lies, feeling magic, intuiting hidden emotions, adapting to new social situations, and so on. 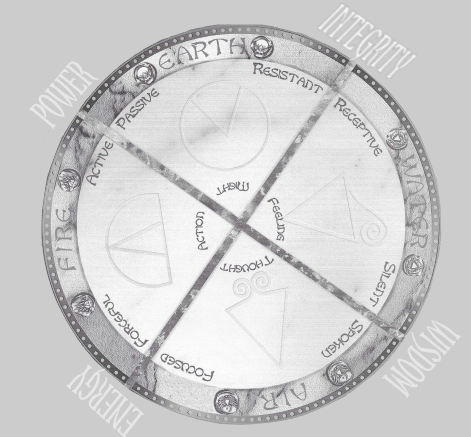 As the above graphic shows, each Element has an opposite Element and combines and contrasts with the remaining two Elements.  For example, Air ('thought') opposes Earth ('might').  The combination of Air and Water results in 'Wisdom' (Air associated with “spoken” and Water, “silent”), while the combination of Air and Fire results in 'Energy' (Air associated with “focused” and Fire, “forceful”).

If a player has a “role” or “career” in  mind for his or her character, one or more Elements can be emphasized.  As examples...

Earth and Water:  priest or healer

Water and Air:  physician or poet

Air and Fire:  leader or messenger

Fire and Earth:  athlete or smith

Even opposite elements can be combined for certain roles / careers.  High Fire and Water scores can represent a scout or dancer.  High Air and Earth can represent a magistrate or inquisitor.

For each Element, a player character has a Specialty.  A Specialty is a particular area of expertise.  “Generally,” the rules inform us, “a Specialty allows a hero to perform an act as if the [Element] score were 1 point higher than it is.”  Examples include...

It's possible for a Specialty to be a “Cross-Specialty,” meaning it can be associated with one Element but affect another.  As an example, the rules explain that Archery is a task normally associated with Fire, but “because arrows fly through the air,” Archery could be associated with Air.  If a hero has a Fire score of 2, but an Air score of 6 (with an Archery specialty), then that hero “would shoot arrows as well as as a 7-Fire” character.  Other Cross-Specialties include Smithing (Fire – Air), Swimming (Water – Fire), and Mining (Earth – Air).

The Everway boxed set comes with twelve pre-generated characters.  As such, Tweet gives us a good amount of insight into his concept of how player characters ought to be.  Below is a chart showing the Element scores for the “ready-to-run heroes.“  The characters are ordered by ascending value of their Air scores. 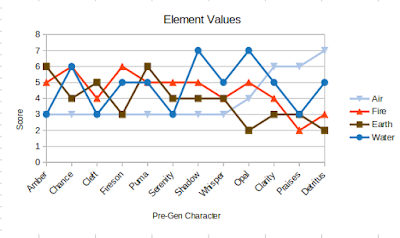 In terms of averages:  Earth = 3.83, Air = 3.92, Fire = 4.5, and Water = 4.75.  The 'Wisdom' Elements (Air and Water) have a value range of 3 – 7 while the 'Power' Elements (Fire and Earth) have a value range of only 2 – 6.  For fully three-quarters of the characters, Element ranges are within 3 – 6; for one-fourth of the characters, Element ranges are within 3 –5.  If the characters are grouped according to which of their Elements has the highest score, each Element would have three characters except Fire, which would have two.  (One hero has Fire and Water tied at highest score.)

The City and the Setting

The Everway Kickstarter has surpassed its goal and – as of this writing – the project has about a month left.  Readers within this time period are encouraged to check it out.

Anyway, Everway the game is named after Everway the so-called “City of a Thousand Deities.”  Located in the sphere of Fourcorner, Everway is the central city of the the realm of Roundwander and is “home to half a million people.”  There are “at least seventy-one gates in Roundwander.”  (We learn, “Most spheres have two gates, each leading to a different sphere.”)  Like characters, realms have a Virtue, a Fault, a Fate.  Realms also have an Usurper.  For Roundwander, these are:

Virtue:  Autumn ( plenty).  The place is old but still active.  It is past its most energetic stage but not yet into winter.  Roundwander's Autumn Virtue represents not just “plenty” in terms of quantity, but also in terms of variety.  The people of Roundwander present the hundred colors of a forest in fall.

Fault:  Spring – reversed ( stagnation).  Roundwander is an old, old place, and the habits of a hundred generations are worn into the stone-paved pathways.

Fate:  Cockatrice ( corruption vs. recovery).  The influx of new people, new magic, and new ideas could undermine what is good about Roundwander or bring it the new energy it needs to overcome the threat of stagnation.

The Walker's Pyramid sits in the center of Everway.  It consists of seven tiers of blocks “about twenty feet high.”  It is “some three hundred feet on a side.”  The Walker is a legendary being who supposedly built the pyramid one stone at a time and “is out among the spheres now, searching for the capstone, which will complete the pyramid.”  We learn, “No one knows what will happen when the pyramid is completed.”  The pyramid is tended by priests and “temples, wandering mystics, and booths that sell magical goods and items for offerings” surround the base.

Jonathan Tweet's “original idea was to have no background at all” in the game, but included the city-setting for people “who want to create their heroes and quests in a cultural context.”  Tweet states that he made the city “big and varied so that you would feel free to add the details that you wish to add.”  He also claims, “Heroes can find plots within the city itself, or they can find reasons to explore other realms” or spheres.  Additionally...

...Everway includes a few magical patterns that aren't explicit.  You can enjoy Everway without finding out all of its secrets, but they're here for those of you who like a little mystery.

Arenas:  This is “where gladiators fight and martial families demonstrate their skill and courage.”

Council House:  “Centuries ago, the leaders of prominent families formed the Council as a way to relieve the great king of an endless stream of mundane decisions and obligations.“

Court of Fools:   “[A] large plaza where entertainers of all types demonstrate their arts.  Mixed in among the buffoons and jugglers, one can sometimes find prophets and seers.”

Gaming Houses:  This is “where fortunes change hands over the rolls of dice.  Other amusements of questionable morality can also be found nearby.”

Gardens:  This place contains “various temples to deities of nature and the earth.  Exotic animals and plants from other spheres can be found here...”

Houses of Dusk:  This is “where the dead are prepared for their final journeys.”

Library of All Worlds:  ”[A] collection of large buildings filled with scrolls holding knowledge and wisdom collected from a thousand spheres.”

Temple of Mercy:  ”Here one finds poorhouses, hospitals, orphanages, and temples to deities of fertility and healing.”

A page in the Playing Guide named 'Sights in Everway' lists various encounters that heroes might have in the 'centers of interest' described above.  There might be a “humanoid dragon, a guest of the [Library of All Worlds], teaching the language of the dragons.”  Around the Gaming Houses, there may be a “spherewalker getting beaten for getting caught using magic to influence the roll of the dice.”

“There are nearly a thousand families in Everway,” the Playing Guide tells us, “some with a handful of members, some with over a thousand.”  These families “are the central system of ordering society in Everway.”  Examples of noteworthy Everway families include:

Digger:  “Historically, a family of miners.  Now, however, they're mostly moneylenders (who still maintain a monopoly on mining).”

Emerald:  “The royal family of Roundwander.”

Mask:  “A family that, officially, provides amusements and diversions.  Unofficially, they are involved in various illicit activities.”

Moondance:  “A family of priestesses and cousins who support them.  Moondances are found in temples dedicated to many different deities.”

Mudbank:  “Leatherworkers.  They are responsible for removing dead animals from the streets...”

Snakering:  “Courtiers, ambassadors, and functionaries.  They were once a powerful family, but now they work at the behest of others.

Posted by perdustin at 10:01 PM No comments: