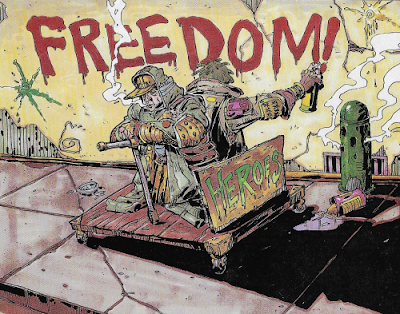 So reads the cover caption of Mayfair's Underground, published in 1993.  Taking place in 2021, Underground is unusual in terms of genre; perhaps “dystopian super-hero” might be the best categorization.  According to the first chapter, “the world of 2021 is clearly a cold and dreary rat trap dominated by violent men and women who shoot or foreclose first and ask questions later.”

Writer Ray Winninger has contributed a variety of table-top role-playing game products; most recently, he has an “Additional Design” credit on last year's Tasha’s Cauldron of Everything.  However, the first textual matter in the book is a poem by William S. Burroughs.  This is a clue to the reader that the game is going to a dark place.  In fact, the full page illustration on page 102 focuses on a person about to commit suicide.  Yet the game is not without (gallows) humor.  Tastee Ghoul, “a chain of fast food restaurants specializing in cannibal cuisine,” has as a motto, “Are you a people person?”  Among other topics, Underground is a commentary on consumerism.  Here is the ultimate extension of consumerism; the consumer becomes indistinguishable from the product.

How did such a strange world come to be?  In August, 1996, “a life-pod launched from an interstellar starship crash-landed in the Florida Everglades.”  The two aliens on-board died as a result.  Although the aliens were “totally unlike any creature mankind had ever imagined,” they are also described as “lobster-like.”  So, the first point of divergence from our reality is that lobsters cannot be imagined.  “The aliens' technology was found to be based entirely around the manipulation of amino acid chains” and this technology held “the clues needed to unlock the mysteries of quantum theory, unified fields, and genetics...”

Because the U.S. Government did not disclose all aspects of the alien technology to the world, a Second Cold War resulted among the “three major trading blocks:  the North American Confederation, headed by the United States; the European Common Market, headed by Neo-Deutschland... and the Far East Collective, headed by mainland China.”

Also According to the first chapter...

...technological advances derived from the pod combined with the political situation wrought by the new Cold War to dramatically reshape the world.  All across the globe, the gap between the upper and lower classes grew broader, crime and other social ills corrupted large portions of the planet, and multi-national corporations grew larger and more powerful than ever before.  Shortly after the turn of the century, warfare evolved into a business as multi-national corporations organized large, technologically sophisticated armies capable of rapid deployment to any hot spot on the planet...  Only a few years after the first corporate army took to the battlefield, all three of the major trading blocks were routinely hiring corporate soldiers to intervene in scores of Third World squabbles and conflicts in the hope of protecting and expanding their economic interests...

One of the so-called militant corporations, Allied Mayhem™ Inc., “learned to modify human genetic tissues, turning test subjects into 'super-men' capable of dominating a modern battlefield.”  However, “stabilizing the genetic enhancement process required a living subject with a seriously impaired capacity to replace lost body cells.”  Originally, AMI used brain-dead bodies that were cryogenically frozen in the twentieth century but, “Due to their artificial brains, the enhanced soldiers were easy to outsmart and frequently failed to follow all but the simplest orders.”

Allied Mayhem began enhancing live volunteers in limited numbers.  Although this latest generation of enhanced soldiers was very effective in battle, the new process was ultimately deemed unstable and abandoned.  During the many months that AMI scientists spent conquering the cellular regeneration problem, they failed to recognize psychological instability as an even more profound obstacle to the enhancement of live subjects.  The first such subjects who awoke to discover that they were suddenly capable of lifting cars, flying, and projecting powerful force fields all lost their grip on reality and went mad.  AMI researchers ultimately discovered that such a radical shift in world view was simply too much for a conscious human mind to handle.

The solution devised by AMI's head of the Genetic Enhancements Division was to have enhancement subjects “spend fourteen months in a sensory deprivation tank wired into” a virtual reality environment based on a super-hero comic book.  During this time, “the computer's program enables the subject to relive his or her entire life as it might have occurred in the four-color” comic book setting.  In the simulation, the subject acquires enhanced abilities while scientists confers those same enhancements to the subject's physical form.  “Once the process is complete and the subject is removed from sensory deprivation,” we learn, “AMI psychologically reconditions the subject to the real world, though a psychological acceptance of his or her newly acquired abilities lingers on within the individual's subconscious mind alongside a faint memory of his or her virtual life.”

Important highlights of the world of 2021 include:

The player characters are super-powered veterans subject to “all sorts of bigotry and prejudice.”  With regard to these veterans, “most are neurotic, slightly detached from reality, and prone to extreme mood swings.”  Additionally, for some of the veterans, the virtual reality experience instills “a 'comic book' world view and begin to interpret life as a series of struggles between 'heroes' and 'villains.'”  Ultimately, “Given the growing alienation of the lower classes and the current climate of predatory corporate practices, a few such [veterans] look upon AMI and the American government as 'master villains' who have betrayed the American way.”  Such veterans formed the titular Underground activist group.