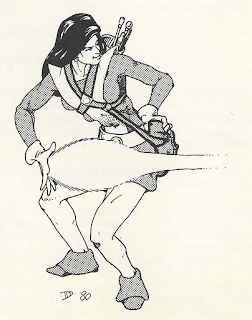 In memory of Jean Wells, Thoul's Paradise presents her character from The Rogues Gallery (1980), a publication that credits Wells as one of the designers.

Ceatitle (Cea as she is called by family and friends as well as for convenience) is a slight, short woman of moderate bearing and beauty. She generally wears worn-looking clothing with the colors green, brown, and yellow predominating. She usually has a bag of goods slung over one shoulder and a quiver for her wands over the other.

Cea by nature is a miser. She buries caches of treasure about the countryside to be used later. She tries to portray herself as a poor but studious magic-user. Cea values information greatly, although she seldom uses it. She enjoys being curious. Finally, she is very mischievous, often getting herself and her party into trouble. Although she will generally aid a party all she can, she will use her dimension door spell to escape the minute things look bad. In extreme cases she will teleport home. Usually she will feel insecure if there are less than 2 escape routes available to her.

Cea has a passion for collecting things of rarity not normally seen as useful nor designed to provide immediate comforts, but seen as a standing of luxury. These include a singing teacup, an ivory ring carved with bears, a small crystal statuette of a dolphin, a magical portable bathtub, and a singing book. She also possesses a familiar – a black cat named Light, who has a permanent unseen servant to open doors for it. The more useful magic items Cea has are a wand of metal and mineral detection, a wand of illusion, a wand of secret door and trap location, a hollow wand filled with poison (non-magical), a ring of protection +3, a bag of holding, and a staff of commanding.


Jean Wells married Corey Koebernick.  Tom Moldvay named one of the Lords of Creation 'foes' after Koebernick and he is listed among the "Playtesters and Other Helpful People" in the credits for that game.  As a special Thoul's Paradise bonus, here is the listing for "Koebernick." 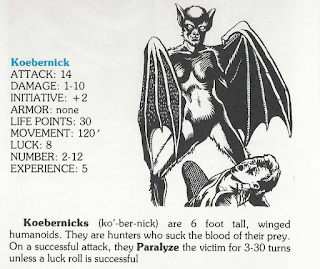 Posted by perdustin at 9:28 AM