Action and Adventure in the Two-Fisted Thirties 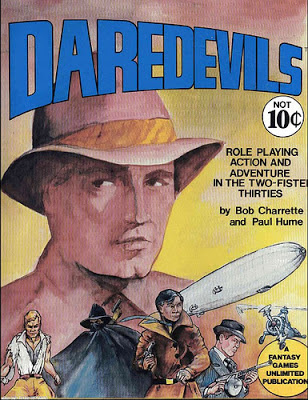 When I was a young lad in the early 80's, a game master friend of mine tried to recruit me into a Daredevils campaign he wanted to run.  In my youthful ignorance, I had a limited appreciation of the past.  Stuff from a half-century ago was supposed to be interesting?  As far as I was concerned, 'pulp' was a gradient of orange juice.  Why play this if we could play D&D or Champions?

“It's like Raiders of the Lost Ark,” he finally said with a tinge of exasperation in his voice.

With that, I was sold.  Neither D&D nor Champions could hold a candle to Raiders.  It turns out that some of my fondest memories of role-playing come from that campaign.  I didn't know what I was doing half the time, but it didn't matter.  It was like Raiders.  More importantly, it was fun.

Daredevils was published by Fantasy Games Unlimited in 1982.  I think it must be the first role-playing game to embrace 'pulp' adventure as a genre.  (I categorize Gangster! and Gangbusters as historical semi-simulations of the “gangster” heyday rather than pulp adventure.)  The game and several adventure books are available as PDFs from RPGNow, but the original box set and publications are still available direct from the FGU website.  Daredevils was designed by Bob Charrette and Paul Hume, the team that had created two earlier FGU games, Aftermath! and Bushido.

It seems that Charrette was responsible for the illustrations, including the box cover (shown above).  (The cover of the actual rule book is a black & white version.)  While Charrette is competent as an illustrator, the cover is somewhat lackluster.  The primary subject is a drably-colored man who seems to be glancing toward his waiter.  One would hope that the cover of a pulp genre RPG would be somewhat more enticing – like the covers of the actual pulps.  The bottom portion of the cover is more appropriate:  an airship and autogyro among assorted pulp 'personalities' (including a rather spare Doc Savage poser in the bottom-left corner).  Perhaps the most interesting aspect of the cover is the Asian dude front-and-center; props to Charrette for being politically correct before that term was in vogue.  Of course, it may have been an intentional counterbalance to the nefarious Fu Sung, an evil Asian mastermind stereotype.  Fu Sung's presence is felt in two of the four adventures in the aptly named Daredevil Adventures booklet (included with the box set).  Yes, the stereotype is racist but, once in a while, can't we have an evil mastermind who happens to be Asian?  Don't get me wrong, I am a firm believer in equal opportunity evil masterminds and I would never suggest that Asians have a predilection toward evil mastermindedness.  However, in terms of style, some of the best evil masterminds – of course, I am speaking only about fiction – are Asian.  Must I feel guilty about occasionally including one in a campaign?

Aside from the rule book (64 pages) and Daredevil Adventures (32 pages), the box set includes three dice, 2d20 and 1d6.  Of course, this is old school, so the icosahedrons are numbered 0 – 9 twice.  Also included are a master character sheet (suitable) for copying and a gamemaster 'screen.'  One side of the screen reproduces various charts and tables from the rules.  The other side presents (1) a nice world map detailing “Political Boundaries in 1930” and (2) a “Quick Reference Table” by which a person can determine the day of the week of any date in the 1930's.  Below, I provide this table for use by my cherished readers. 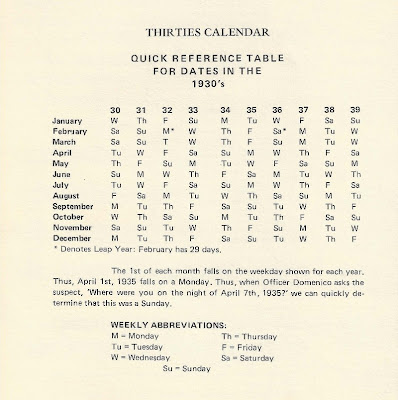 Posted by perdustin at 5:09 PM