The Book that Appendix N Forgot

On this date, twenty-five years ago, Barbara Ninde Byfield passed away.  She was an author and an illustrator.  More to the point of this post, she wrote and illustrated The Glass Harmonica: A Lexicon of the Fantastical, since re-published as The Book of the Weird.  The complete subtitle reads:


Being a most Desirable Lexicon of The Fantastical, Wherein Kings and Dragons, Trolls and Vampires, to say nothing of Elves and Gnomes, Queens, Knaves and Werewolves, are made Manifest, and many, many further Revelations of The Mystical Order of Things are brought to light.

The back of my copy describes the book as “a treasure chest of hidden knowledge for those who fancy venturing into the twilight worlds of the Heroic, the Occult, and the Romantic.”  It is, in effect, an encyclopedia of fantasy and fairy tale tropes.  Doubtless, it is the book to which Zeb Cook refers in his foreword to The Dungeon Alphabet.  Cook says, “...I cannot remember the title or artist...It fueled my imagination with possibilities and led me to incorporate that fantastic whimsy into my own games – to want to create worlds with those touches of detail, irony and just out-and-out wonder.”

As an example of Byfield's whimsy, here is a portion of the entry on Hermits:


ANCHORITES show a preference for thorns, drought, and meditation.  Certain that the next world will be without the above afflictions, they relish their present discomforts, which may include beds of thistles.

As examples of Byfield's illustrative prowess, see her 'Castle' diagram below and her 'Landscapes' diagram at the close of this post. 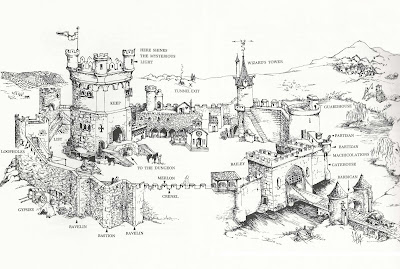 When I say, “The Book that Appendix N Forgot,” I am referring to the Dungeon Masters Guide Appendix N; Byfield's book is given due credit in the RuneQuest Appendix N.  This is curious in that the influence of The Glass Harmonica is more apparent in AD&D than in RuneQuest.  Some other blog does a capable job of demonstrating the artistic similarities between Byfield's work and 1e AD&D, so I will not duplicate the effort.  However, I will speculate that, in the absence of Byfield's entry on Trollops, Trulls, Bawds, Doxies, and Strumpets, the DMG 'harlot table' would be much less colorful or might not exist at all.  Also, I must wonder if “Rods, Staves, & Wands” would have been so grouped by Gygax in AD&D if not for Byfield's categorization of Wands, Staffs, and Rods. 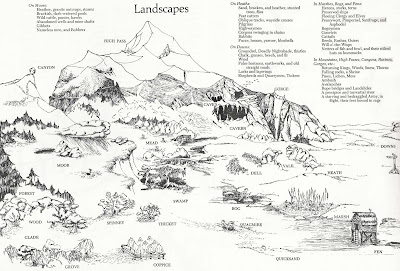 Posted by perdustin at 8:17 AM