Characters in Empire of the Petal Throne


Given the strong association of Empire of the Petal Throne and Dungeons & Dragons, similarity of game mechanics between the two is to be expected.  The differences are therefore noteworthy, such as the differences with regard to character creation.

The three 'classes' in original D&D are Fighting-Men, Magic-Users, and Clerics.  For EotPT, the differences are in name only; the three 'professions' are Warriors, Magic Users, and Priests.  Similarly, while D&D has six 'abilities' for characters, EotPT has six 'talents'; four of these abilities/talents are identical:  Strength, Intelligence, Constitution, and Dexterity.  However, instead of Wisdom and Charisma, EotPT has Psychic Ability and Comeliness.  Although EotPT talents and D&D abilities are alike, the scores are determined differently; EotPT employs a flat distribution percentile.  According to section 410...


Should a player roll a totally unsuitable character, the referee (at his option, not the player's) may allow the player to roll over for a totally new character.  Re-rolling individual basic talents is NOT allowed, nor is it possible to transfer points from one talent to another.

Of course, with a flat probability distribution, EotPT characters have a greater likelihood than their D&D analogs of obtaining extreme values (either high or low).  The talent score 'groupings' (and their descriptors) are shown in the table below.  Interestingly, the 'average' range for every talent other than Comeliness is 41-60; for Comeliness, the 'average' range is 21-50. 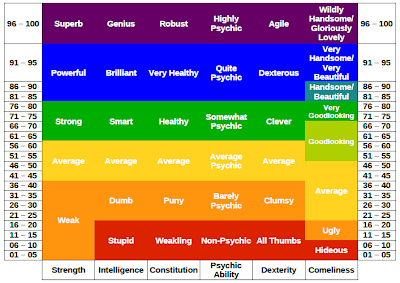 Psychic Ability “is one's ability to employ magic, attain communication with the Gods, etc.”  It is the prime requisite for Magic Users in EotPT; in contrast to D&D, the prime requisite for EotPT Priests is Intelligence.  'Non-Psychic' individuals are unable to use magic.  'Barely-Psychic' characters can cast spells except those from the highest tier.

Comeliness is only a measure of appearance, it does not include elements of 'personality' that are a part of Charisma.  In EotPT, there are no rules indicating that Comeliness affects NPC reactions or hireling loyalty.  Most of the talents have six 'groupings' while Comeliness has eight, ranging from 'Hideous' to 'Wildly Handsome/Gloriously Lovely'.

In addition to talents, EotPT characters have background skills.  A percentile die is rolled to determine how many and of which group; the player chooses the specific skill(s).  There are three 'groups' of background skills:  plebeian, skilled, and noble.  So, in effect, the 'background skill' roll determines a character's original social class – not that it matters.  There are six possibilities:
The 'plebeian' group is comprised of various trade skills such as grocer, carpet-maker, miner, perfumer, etc.  Among the 'skilled' group there are:  sailor, bird-trainer, scribe-accountant, swimmer-diver, etc.  The 'noble' skills include scholar, botanist, physician, 'assassin-spy-tracker', poet, alchemist, 'courtesan/Don Juan', etc.  At certain levels of experience, there is a 50% of obtaining additional skills.  Alternately, a “skill may also be learned in the game itself” provided money, time, and a suitable instructor.

The Warrior list consists of various weapon skills (such as “axeman,” “bola-slinger,” “crossbowman,” et al.), but the last three skills on the list are:  “sapper,” “catapult-artilleryman,” and “strategist.”

There are a variety of other spells (called “bonus spells”) that are divided into three groups of increasing potency.  Upon advancing to a new experience level, Priests and Magic-Users have a chance of learning bonus spells.  Priests and Magic-Users choose from among the same population of spells; therefore, only the 'professional skill' spells are not shared between the two professions.

Posted by perdustin at 5:28 PM

Email ThisBlogThis!Share to TwitterShare to FacebookShare to Pinterest
Labels: Empire of the Petal Throne, James Garrison