Players of The Future King adopt the roles of six characters provided with the game.  Not merely pre-gens, these characters – described below – are historical personages that Tom Moldvay rendered in game terms.  Some also appear in Lords of Creation, which suggests a certain fondness on Moldvay's part.  Dave Billman provided the art shown here and he often contributed to Moldvay's non-TSR projects.  Billman is/was quite talented; unfortunately, I cannot find much information about him. 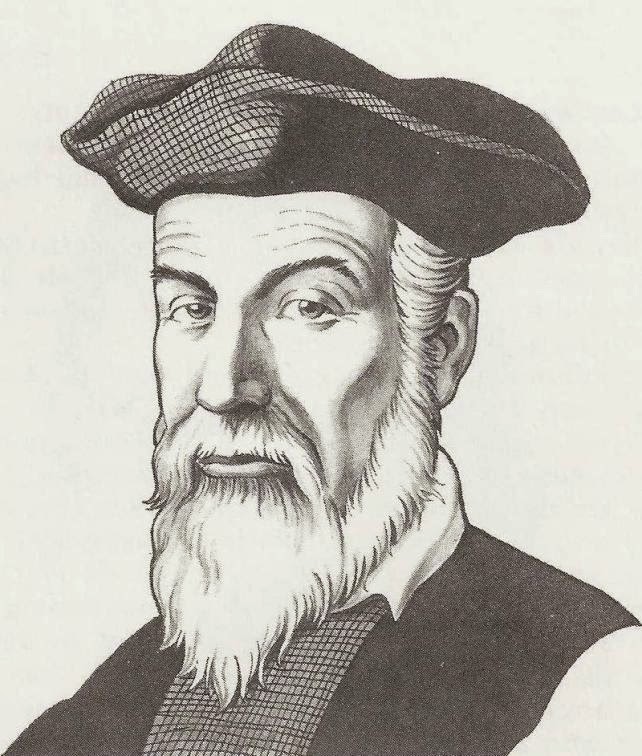 I place Nostradamus first because, compared to the others, he is likely closest to an average person in terms of physical ability.  He has 59 Survival points, no Initiative bonus, and a 'base attack' (knife) with a success rate of approximately 56% (once per turn).

Nostradamus can “heal each hero once...for a maximum of 36 points.”  He can also restore all of a person's Survival points, but only “two people total” in the course of the adventure.  He can perform 'psychometry' three times, engage in 'clairvoyance' three times, use 'mind block' to “defend himself against any kind of mental attack” three times, and employ 'true sight' to “see the reality behind any illusion” three times.  Also, by virtue of his 'premonition', the Game Master must warn the player when Nostradamus “senses possible danger ahead.” 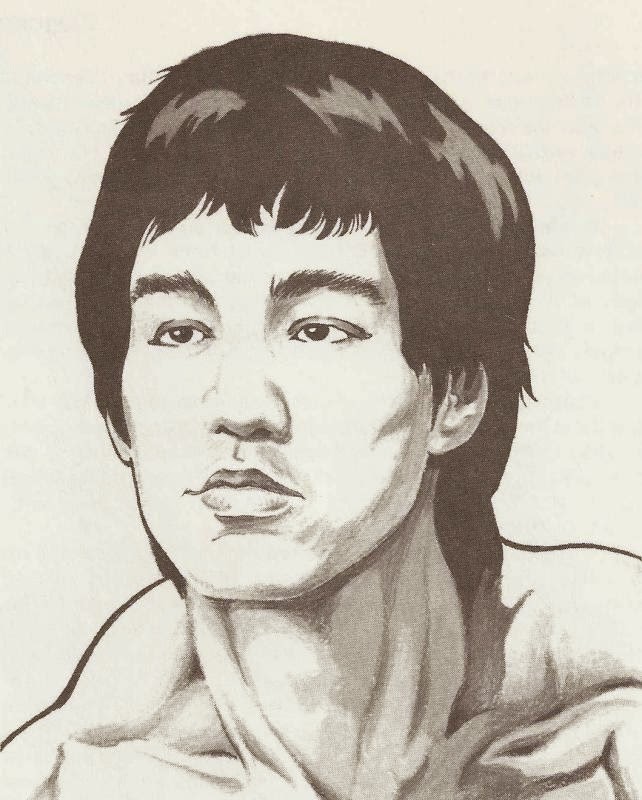 Bruce is an interesting addition to the game in that there is no indication of licensing from his estate even though his name and likeness appear on the cover.  Anyway, he has 113 Survival points and +3 Initiative.  He can attempt three unarmed strikes per turn with a success rate of approximately 89% each.  The amount of damage he inflicts is equivalent to what a 16th century French physician would inflict with a knife; however, he gets a damage bonus for each attack where he rolls less than 34%.  If so, he inflicts more damage than he does with nunchucks, a weapon with which he can attack twice per turn at a success rate of 72%.

In addition to his martial arts damage bonus, when doubles are rolled for Bruce's attack, “he has hit a vital area of his opponant [sic] and does twice as much damage as normal.”  On the other hand, when an 'opponent' rolls double when attacking Bruce, the attack fails because “Bruce...has actually dodged the attack.” 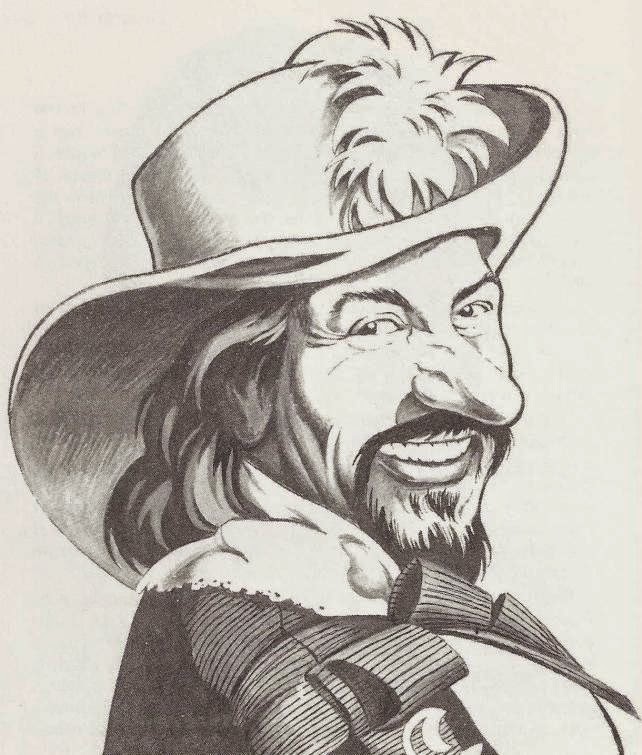 Evidently, for his depiction of Cyrano, Billman relied upon a publicity still of José Ferrer from Cyrano de Bergerac.

Cyrano has 92 Survival points and +3 Initiative.  He can attack twice per turn with a knife at a success rate of approximately 64%.  He also has a one-shot musket (58% success rate) which takes six turns to reload.

Of course, Cyrano is at his best with a rapier, which apparently inflicts the same amount of damage as nunchucks.  With the rapier, he can attack twice per turn with a success rate of approximately 89%.  If he rolls less than 34%, he gets a damage modifier greater than that of a two-handed axe (see below) or, if he rolls less than 17%, he “has the choice of disarming his opponant [sic] instead of doing physical damage.” 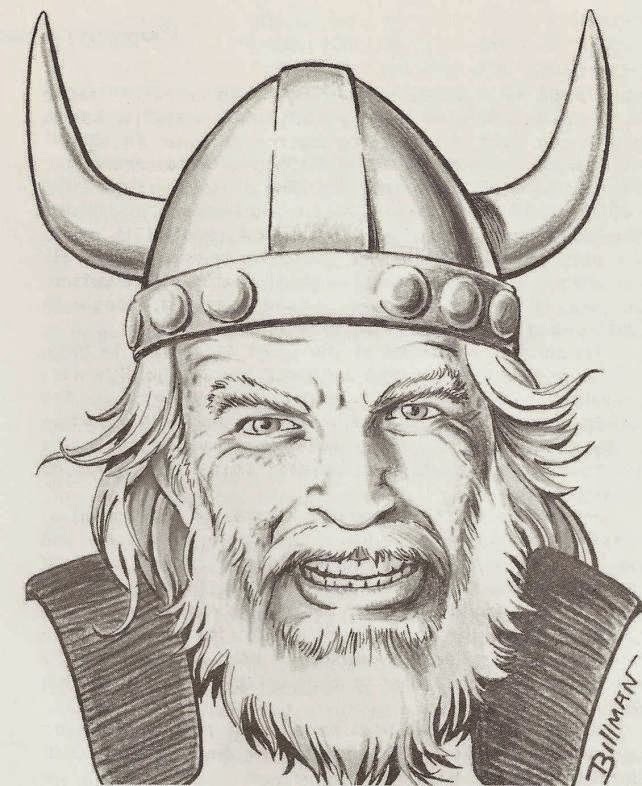 As someone who tried to conquer England, he is an unlikely choice to be a champion of King Arthur.  Yet, standing seven feet tall, who's going to argue with him?

Harald has 119 Survival points (which is more than any other hero) and +2 Initiative.  He is one of only two characters that wear armor.  He wields a two-handed axe with which he can attack once per turn at a success rate of approximately 78%.  He also has a sword that permits two attacks per turn at 69%.  However, he does more damage with the axe and does double damage when doubles are rolled.  He can otherwise attack with a knife twice per turn at 58%.

Harald also has a 'pilot' ability that gives him “an uncanny sense of direction” and allows him to “navigate by using subtle clues meaningless to most people.” 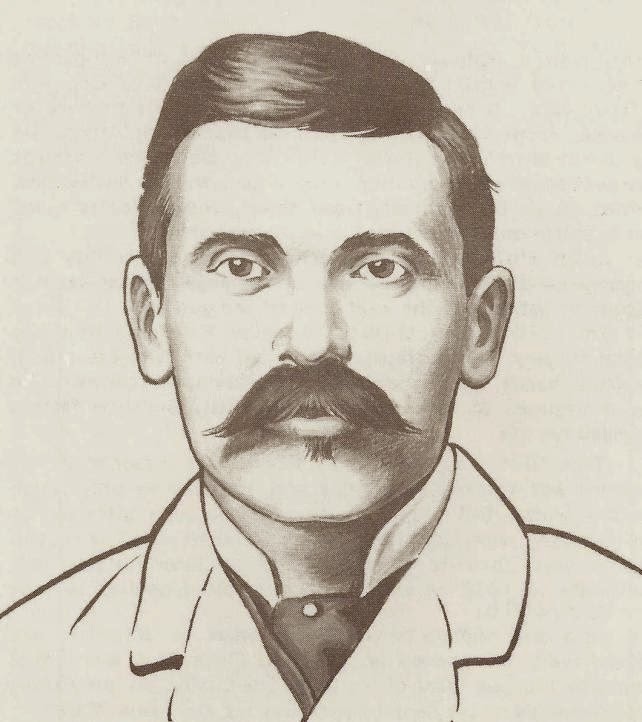 With a score of 57, Doc has fewer Survival points than Nostradamus, doubtless attributable to tuberculosis.  Sill, he has an Initiative of +3.

Doc can attack twice per turn with either a knife (at 72%) or a rifle (at 75%).  Doc's expertise, however, is with his revolvers.  With them he can attack three times per turn with a success rate of approximately 81%.  When using his revolvers, his Initiative bonus is +5.  If doubles are rolled when attacking with either revolvers or rifle, he inflicts greater damage or can choose to disarm his 'opponent'.

Doc also has 'sleight of hand' that he can use to “make any small object seemingly appear and disappear by magic.” 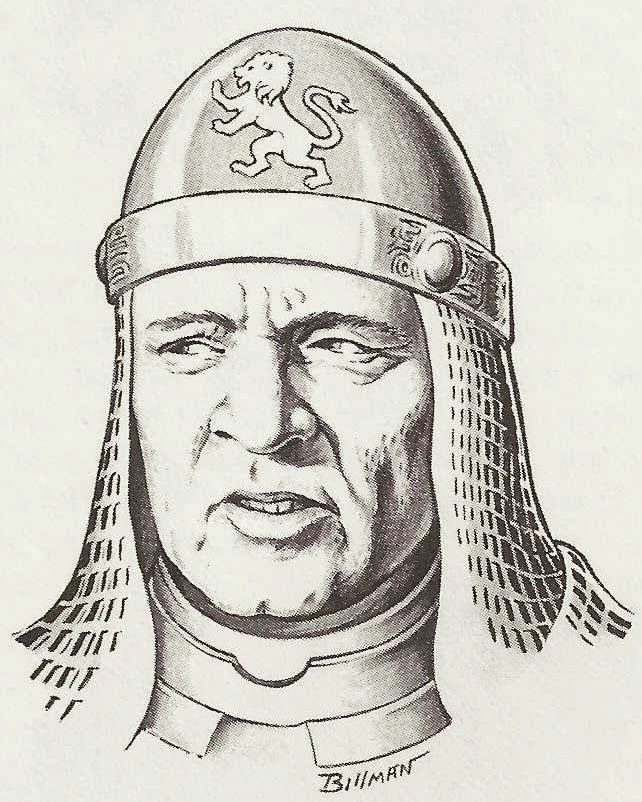 Owen was the last Welshman to claim the title “Prince of Wales.”  Billman apparently found it fitting to base Owen's appearance on that of noted Welsh actor Richard Burton.

Owen has 71 Survival points, +1 Initiative, and armor that offers impressive damage reduction.  He can attack twice per turn with a knife (at 42%) or a sword (at 64%).  He also has a longbow that takes a turn to “reload” and has a success rate of approximately 58%.  All of these weapons inflict the same range of damage.

Three times during the adventure, “Owen Glendower can lay a curse on a foe.”  The 'curse' will reduce the foe's Luck, attack success, and damage modifier for one combat.  In accordance with Henry IV, Owen can “summon spirits from the vasty deep.”  In game terms, this means that twice during the adventure he can use illusions to cause foes to “flee in panic.”  In addition, Owen can use 'necromancy' twice to “call up the shade of a dead person and talk to the dead individual.”  Finally, once during the adventure can summon a 'storm' that will cause his foes (but not his friends) 1d6×10 points of damage.

Although not a player character, Saint-Germain can appear as a random encounter and there is a chance (27.77%) he will attack the party.  Saint-Germain cannot die, but he can sustain 100 Survival points before he decides to leave.  He has an Initiative of +3 and can use a sword to attack twice per turn with a success rate of approximately 56%.  Saint-Germain has the powers of 'invisibility' and 'hypnosis'.

Discussed previously, Corvus can appear as a random encounter.  He might attack the party (16.66% chance) but is more likely (41.66% chance) to “help the heroes in their next combat.”  He has 90 Survival points and +3 Initiative.  Corvus' force field gives him less protection than what Owen Glendower's armor offers; however, unlike most armor in The Future King, the force field works against missile attacks.

It is also possible for Sinbad to appear as a random encounter.  Unfortunately, no game statistics are provided for him.  I suppose this is because he will neither attack the party nor fight alongside them.  However, there is a 41.66% chance that Sinbad will like the party enough to give them a magic dagger that “ignores most armor.”  All of the player characters (except Bruce Lee) have a listed combat ability with a knife so I assume skill with knives also applies to magic daggers.  Thus, any character (except Bruce Lee) could make use of Sinbad's dagger.  Bruce Lee also happens to be the only player character who isn't white – just an observation.  How hard would it have been to give him a knife attack?

Posted by perdustin at 7:37 PM