The Cosmology of DragonRaid 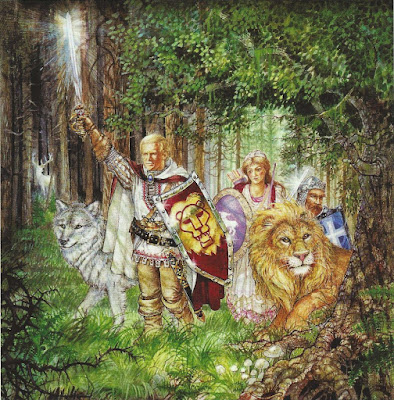 Games are frequently used as educational tools, so it's no surprise that someone would employ a role-playing game for teaching purposes.  However, it is counter-intuitive that – during the heyday of the Satanic Panic – a role-playing game would be used “to impart Christian truth.”  Yet, DragonRaid, intended as a “discipleship tool,” was published in 1984.  According to the New Player Briefing:


Other fantasy role-playing games create open-ended situations that have the tendency to reinforce worldly values and philosophies.  Many of them even generate unrighteous interest in the occult.  But DragonRaid is radically different in that it uses the imagination to convey a biblical understanding of good and evil.

The game's designer, Dick Wulf, played Traveller and D&D.  He knew that role-playing games are not inherently satanic and recognized their engaging value; so he designed DragonRaid as an “Adventure Learning System.”  Unfortunately, many in the Christian community were not as open minded as Wulf and DragonRaid was decried.  Additionally, gamers were not inclined (nor are they now) to embrace a 'Christian' RPG.  DragonRaid was virtually alienated from the communities it attempted to serve.  Regardless, the game is sold to this day and the current publisher is evidently preparing a second edition.

The setting of DragonRaid is the planet EdenAgain.  (Wulf had a penchant for creating proper nouns by combining two words but still capitalizing the 'first' letter of the 'second' word.)  “[A]t the outer reaches of the universe,” EdenAgain orbits the star Warfare.  The planet was instantly “forested and peopled.”  Early on...


...that pristine world came under the aggressive attack by the Evil One...[T]he Great Red Dragon known as Abaddon took one malignant egg from the dragon Kakia and transported it across the universe.  In EdenAgain's atmosphere, the dragon ovum divided before birthing, hatching nine evil, writhing serpents in a land of peace-loving people.

The serpents were the forerunners of the nine varieties of dragons:  crystal, gaze, fluorescent, firedrake, dream, slime, shadow, sea serpent, and rainbow; each with its own attributes.  Due to the enchantments of the dragons, the people were deceived; they “found themselves separated from the Eternal Presence and discovered that their peacefulness had vanished.”  The dragons “invited...nearby worlds to send the worst of their kind” to EdenAgain.  From these worlds came goblins, orcs, trolls, and other “dark creatures.”

Eventually, the OverLord of Many Names (one of those names being Jesus Christ) appeared on EdenAgain to initiate the Great Rescue, “which continues to this day...”  The OverLord led “carefully chosen people toward the southern portion of the land and laid bare the deception that had gripped them.” At the southern end of the continent of Talania, the OverLord created the Liberated Land, a refuge for the chosen people.  The Liberated Land is completely protected from the Dragon Lands by the Peaks of the New Beginning and “a dense Mist Barrier that rises from the untamed oceans.”

The chosen people became known as the TwiceBorn “because of their 'second birth,' when the OverLord rescued them and set them free from dragon enchantment.”  They “have an everlasting desire to follow the OverLord in heart, mind, and will.”  Player characters are TwiceBorn inhabitants of the Liberated Lands.  Having graduated from the DragonRaider Academy, the PCs are LightRaiders who go on missions to the Dragon Lands in order to thwart evil.  Hence the titular 'DragonRaid' is not a raid by dragons, but a raid against dragons.  The OnceBorn (otherwise known as dragon slaves) are humans who reside in the Dragon Lands and remain under dragon enchantment.  LightRaiders are prohibited from killing the OnceBorn because some of them “will meet the OverLord” and “agree to be rescued.”  Other intelligent beings are fair game.