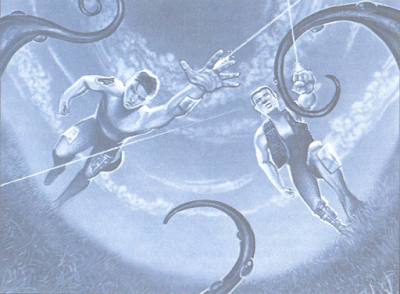 When making attack rolls or skill checks, CYBORG COMMANDO players roll two ten-sided dice.  However, instead of adding the results together or interpreting one result as 'tens' and the other 'units', the results are multiplied together.  This method is called the d10x system.  The CCF Manual lists various reasons why CYBORG COMMANDO employs the d10x system:
For skill checks and stat checks, success is determined by rolling a certain number or less.  However, for combat, the opposite is true:  “An attack is a 'clean miss' if the result of the d10x roll is a given number or less.” 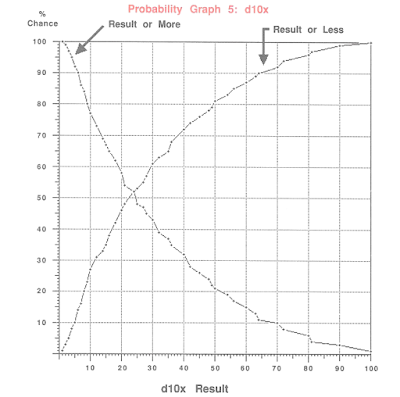 
The average result of a normal d10x roll is 30¼.  The median result is 24; that is, you are equally likely to roll either 24 or more or 24 or less.  Exactly one fourth of all the possible results are odd numbers; three fourths are even numbers.

As previously noted, a Combat Turn (CT) represents 8.6 seconds and is divided into ten phases of 0.86 seconds each.  The ten phases are split into two cycles:  phases 1 - 5 in the first cycle and phases 6 - 10 in the second cycle.  A character can perform a number of actions in a cycle equal to the “first digit of the Neural Capacity score (or 1 if NC is 9 or less).”  At the beginning of every Combat Turn, players must announce what actions (such as attacks) they intend their characters to commit for both cycles.  This establishes when in the Combat Turn any given character will act because each phase is reserved for a particular type of action (most of which are attack options):
Phases 1 & 6:  Zap Weapons
Phases 2 & 7:  Fast Projectiles
Phases 3 & 8:  Slow Projectiles
Phases 4 & 9:  Lobbed Objects & Projected Substances
Phases 5 & 10:  Physical & Sonic Attacks, plus all Miscellaneous
Miscellaneous actions include any activity other than an attack or movement.  Phases are resolved in order.  A character always has the option to forgo an announced action.  If an action announced for the first cycle is forgone, “you may revise your intentions for the second cycle.”

Movement need not be announced at the beginning of the Combat Turn and does not count against the number of actions permitted to a character.  If a character is not otherwise committing an action in a given phase, he (or she) may move two meters (or yards).  The maximum number of yards (or meters) a character may move (under his or her own power) during a Combat Turn is ten times the character's Speed value.  (Speed equals Neural Capacity divided by ten.)  This movement allowance is reduced by terrain modifiers as well as what attacks the character attempts in the Combat Turn.  For instance, “Each laser shot has a -1 movement penalty, and each grenade, a -2.”  If a character forgoes an attack in a Combat Turn, the movement penalty imposed by that attack no longer applies.

Starting characters have a Combat Rating (CR) of 10.  If an attack roll is equal to or less than the attacker's Combat Rating, the attack misses, “not hitting anything.”  Assuming the attack is not a clean miss, any modifiers are applied to the result.  “If that total equals or exceeds the Defense Value (DV) of the target,” the rules state, “you have successfully hit it.”  Every 'target' has five Defense Values, “one for each of the five basic attack forms.”  These attack forms are represented by the acronym LITES:  Laser, Impact, Thermal, Electro-magnetic, and Sonic.

Prediction Aiming Digitizer (PAD) programs allow Cyborg Commandos to improve their attack roll results by expending additional Power Units (PU).  “The amount of the...bonus is always equal to the amount of PU expended for it.”

“The amount of physical damage the character's body can sustain” is measured in Integrity Points (IP).  The damage inflicted by an attack “is either fixed or standard.”  Hand-held weapons inflict fixed damage (1 - 20 IPs depending upon the weapon).  Standard damage is equal to the original attack roll (with a possible modifier).  Lasers – for example – inflict standard damage.

The advanced combat rules include special effects (SFX).  Special Effects come into play if the attack roll was doubles (“that is, the same number on both dice”) and otherwise successful.  For Special Effects, 1d10 is rolled and a table is consulted.  The specific effect depends upon the target:  Normal Human, Cyborg Commando, or Alien.  Possible effects include:  “Flees in fear,” “Weapon destroyed,” and “Damage doubled.”

Posted by perdustin at 6:11 PM