Published from 1983 to 1985, Imagine was TSR's official organ in the UK.  Issue #22 was a Michael Moorcock Special Feature including:  an interview with him, a short story by him (“1st UK magazine publication”), an AD&D adventure by him, and a three page publication history of the Eternal Champion by someone other than him.  In the interview, Moorcock tells us what he thinks about people who partake in role-playing games:


...I know a lot of people who are actively involved.  It's certainly very popular.  If you look back to the 20s and 30s, the people then were enjoying the popular magazines, they contained the same types of fantasies but they weren't so formalized.  It's also linked to the times we live in.  Large numbers of people feel disenfranchised, and if people haven't got any effect, or feel that they haven't got any effect in the real world, they go into religion – or perhaps role-playing games.  Both are substitutes for the person who feels that he has no effect on anything.

Perhaps writing Sword & Sorcery stories about an albino also counts as a substitute.

Anyway, the eight page adventure is written by Michael Moorcock and Michael Brunton.  So, it's a collaboration.  How much did Moorcock contribute?  In the interview, when Moorcock is asked if he will write for role-playing games, he replies, “I'll write the odd scenario, such as the outline I did for IMAGINE.”  So, Moorcock's contribution was limited to an outline.  The credits at the end of the adventure attribute “Inspiration” to Moorcock and “Perspiration” to Brunton.  Using the Edison criteria, I suppose Moorcock was responsible for ten percent of the adventure.

In the Table of Contents, the “mini-module” is called “The Iron Galleon.”  When the adventure is presented on page 25, it has the title “Earl Aubec and The Iron Galleon.”  The scenario turns out to be a “one-on-one adventure” where the player assumes the role of a Moorcock creation, Earl Aubec of Malador, previously appearing in a 1964 short story.  In AD&D terms, Aubec is a twelfth level fighter with a +3 two-handed sword.  Actually, there is provision for a second player character – Jhary-a-Conel, an incarnation of the Eternal Sidekick.  Jhary is a seventh level fighter who “can use magic items and scrolls as though a magic-user.”  He also has a flying cat, Whiskers, that “should be treated as a magic user's familiar.”  In the absence of a second player, Jhary can be used as a non-player character.

A half-page section, The World of the Young Kingdoms, is intended to be read by both the DM and player.  While the section briefly describes Moorcock's setting, mostly it reveals Aubec's history.  We learn:


At Kaneloon he fought and defeated creatures from his own imagination.  In rising above the darkness of his own mind Aubec won the right to go beyond the world's boundary and carve new lands from the Chaos-stuff that existed beyond.  Here too, he first encounters Myshella, the Dark Lady, and refuses the 'rights' that she offers him....

This is an impressive accomplishment for someone with a Wisdom of 9.  There is also a section of Dungeon Master's Notes.  The section begins with six paragraphs of background information.  There is also a sub-section about alignment in Moorcock's setting; mainly, “the classifications of 'Good' and 'Evil' have no real relevance.”  (Perhaps the adventure should have been presented in terms of BECMI rules instead of AD&D.)  Also, some Dungeon Master advice is presented regarding one-on-one play:


In a one player module it is always possible to 'kill off' the one and only character with ease.  The DM must resist the temptation to see the adventure as a personal confrontation, and his or her duty in that confrontation as 'getting' the player.  This doesn't mean that the player character should be given an easy ride, but the DM should remember that the character is supposed to be a hero and win through.... most of the time.

The adventure presents a couple of house rules: 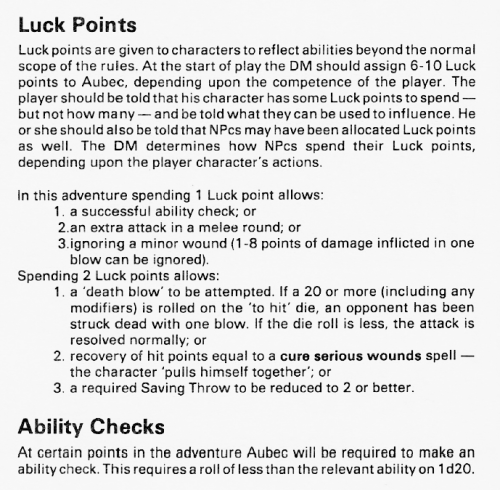 Yielding to tradition, the scenario begins in a tavern.  While enjoying a repast, time seems to stand still except for Aubec and his cat.  “From the shadows” appears Myshella, the Sorceress of Kaneloon.  Aubec's nameless cats purrs, so we know the sorceress intends no harm towards Aubec.  (“Aubec's cat is not a familiar, but it is sensitive to danger.  The DM should make a point of mentioning (subtly) what the cat's reaction is to the various characters and situations in this module.”)  She reveals the premise of the adventure.  There's an Iron Galleon which “sails not only the seas of the Young Kingdoms, but the waters of other worlds as well.”  Somewhere, the Captain of the Iron Galleon acquired the Horn of Fate, “a treasure of incomparable power” capable of “bringing about the ruin of everything.”  Myshella wants Aubec to obtain the Horn and deliver it to her so she can send it “out of Aubec's world...”  Myshella provides some money so that Aubec can hire a ship to travel to a given location.  If Aubec does so, “Within five days [he] will meet the Iron Galleon.”  Myshella departs and time resumes.

“If Aubec decides not to obey Myshella's instructions” within two days, he is attacked by hirelings of an old enemy.  Such attacks will continue daily until Aubec (literally and figuratively) gets on board.  Before encountering the Iron Galleon, “The DM should use at least one” preceding encounter.  One such encounter is attack upon the ship by an ildriss (air grue).  The other possible encounter is an attack by “a Pan Tang slave raider looking for fresh victims.”  Regardless of which preceding encounters are employed, eventually the Iron Galleon collides with the ship Aubec is on and destroys it.  Aubec is supposed “to grab the anchor chain of the Iron Galleon as it passes, and climb up it to 'safety'.”

The captain of the Iron Galleon is Dyvim Ka'aand, “a Melnibonéan outcast, doomed to wander the seas between the worlds...”  In true Melnibonéan fashion,  “He maintains a pretense of bored, tolerant amusement towards the world, beneath which he is haughty, noble, sophisticated, and amoral.”  Dyvim Ka'aand is not given a character class; however...


Dyvim is the equivalent of a 12th level spell caster when casting his memorised spells.  Unlike normal magic users or illusionists, Dyvim does not have to 'memorise' other spells.  His spell grimoires and tomes contain details of spells that are functionally identical to all the magic user and illusionist spells of 6th level and below.  After studying these spells for a period of (4d4 ⨯ spell level) minutes, Dyvim Ka'aand is able to cast them.  There is also a 17% chance that Dyvim Ka'aand will be able to cast any spell from memory.  In this case, there is a 5% chance he will do so incorrectly and the casting will prove to be a waste of time.  However, there is a limit to Dyvim Ka'aand's spell casting capability.  He cannot cast more than 35 levels of spell in a single day – for example he can cast up to 2 ⨯ 1st, 1 ⨯ 2nd, 4 ⨯ 4th, and 3 ⨯ 5th levels.

The Iron Galleon is mapped out and each numbered location is described like a proper dungeon.  One location is the hold, containing “the Iron Galleon's collection of trinkets” from a plethora of worlds.  Such trinkets include:  “lengths of ship's timbers; oil barrels (for the lamps); mold-covered grain sacks; chests full of tea, raw cotton, white marble, pottery, and black powder (which is so damp as to be useless); wine amphorae; five life preservers marked HMS Graf Spee and perched on top of one heap is a what appears to be a giant, misshapen arrow – a Phoenix AIM 54A air-to-air missile, which is armed and ready for firing.”  (Elsewhere on the vessel is “the ejector seat from a Mig-31 Foxhound.”)  There are a few locations with 'monsters' (e.g., stirges and rust rats) but, mainly, the Iron Galleon serves as a venue for interacting with non-player characters.  Aside from Dyvim, other intelligent denizens of the ship include:

Jeroaz :  A Dwarven jester with a +1 slapstick that causes extra damage because it “is tainted with unclean Chaos-stuff.”  (6th level assassin)
Master Smiles :  “He is simply a dissolute sybarite who actively enjoys the life of contemplative cruelty and barbarity that he indulges in aboard the Iron Galleon.”  (5th level fighter)
Kateriona van Hjeok :  Last survivor of a group of pirates who assaulted the Iron Galleon.  She has an “eye patch and steel prosthetic hand.”  (7th level fighter)
Miriame :  A refugee from a slave galley, “Dyvim has amused himself by feeding her a powerful hallucinogenic drug which makes her totally compliant to his will – the withdrawal symptoms are extremely painful.” (non-classed)
Windlos of Heuliss :  A “flying man” trapped on board the Iron Galleon.  (non-classed, but 7+1 Hit Dice)

The Horn of Fate – appearing to be a drinking horn – is in Dyvim's study.  Dyvim knows the Horn is special, but evidently does not realize its true nature.  What Aubec does to get the Horn is up to the player.  Aubec can attempt to recruit non-player characters as allies against Dyvim.  “Aubec need only obtain a positive reaction (DMG p63) to apparently enlist the aid of any of the NPCs.”  Aubec's cat is useful in determining which non-player characters are trustworthy.  Aubec and his allies can make use of “a small wooden sailing boat” on the Iron Galleon.  There is also a way to destroy to Iron Galleon.  If Aubec gets away without killing Dyvim, the Melnibonéan will send an invisible stalker against Aubec.  If Aubec does not repair to Kaneloon with alacrity, the DM may have Aubec attacked by his old enemy's hirelings “as an extra incentive to Kaneloon and safety with minimal delay.”

Posted by perdustin at 5:37 PM