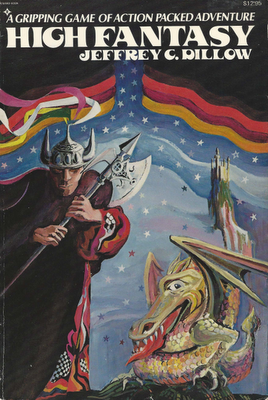 Your humble host is thrilled to discuss High Fantasy, a game which deserves more attention than it receives. Jeffrey C. Dillow created and playtested High Fantasy through the auspices of the Simulation Conflict Club at Indiana University in the mid-70's. As far as I am concerned, this is the epitome of 'old school' – enthusiasts at the dawn of the hobby crafting what they think a role-playing game should be. Dillow self-published in 1978 and, the following year, the game gained a new cover and was distributed by Twinn-K (apparently a supplier to hobby stores). In 1981, Reston Publishing (a subsidiary of Prentice-Hall) came out with a second edition. (It is a copy of this second edition which your humble host owns.) A few adventures were released; one supplement, Adventures in High Fantasy, even included a wargaming system. By all accounts, the adventures – some solitaire, some multi-participant – were of good quality. Things were looking good: quality material, big-time publisher, and then...and then...nothing.

Was the profit margin not sufficient for Reston?  After getting their toes wet, did they decide to forgo competition with TSR and Random House?  Did Dillow – for whatever reason – decide to retire the game?  It seems that Dillow treated the High Fantasy publications as an extension of his hobby rather than as a career.  What little information I have been able to locate about Dillow comes from 'Tome of Treasures'.  It appears that Dillow himself signed up with that forum last year only to write a single message.  In that post, he mentions that the 1983 CBS television series Wizards and Warriors acknowledges High Fantasy
in “the fine print at the end [credits].”  Thanks to the magic of YouTube, we can view this acknowledgement.


Specifically, it states, “The title 'WIZARDS AND WARRIORS' is used with the agreement of MATTEL, INC. and RESTON PUBLISHING COMPANY, INC.”  I think it's interesting that they use the word 'agreement' instead of 'permission,' but maybe I'm reading too much into it.  While the television series has nothing to do with the High Fantasy role-playing game, this statement is a recognition of Reston's 'right' to the phrase “Wizards and Warriors.”  You see, Reston had compiled two solitaire adventures that had previously been published separately (In the Service of Saena Sephar and Murder in Irliss) and published them under the title Wizards & Warriors.  It even has a Steranko cover!  Not one of his best, but it's delightful in it's own way.

I am of the opinion that the name 'High Fantasy' contributed to the game's obscurity.  I mean, more famously, the phrase refers to a genre; people are much more likely to think of the genre instead of associating the term with a product.  The title 'Wizards & Warriors' may have been an attempt at cultivating a viable brand for the product line.  Alas, the product line was discontinued.  Had Reston published a polished third edition with Steranko quality art and a Wizards & Warriors brand, I think it would have a viable fan base thirty years later.  Even so, the game deserves a reprint – if only from a print-on-demand publisher – for the ideas it presents.
Posted by perdustin at 4:06 PM