In Dragon 109 (May 1986), Paul Montgomery Crabaugh presented a system for creating 'customized classes' for the (Basic) DUNGEONS & DRAGONS® game.  In essence, he assigned numerical values to various class features; the more powerful/versatile the feature, the higher the value would be.  One could then pick and choose which features to have for a new class, add up the values, and apply the total as a multiplier to a baseline experience structure.  A class with several and/or powerful features would require proportionally more experience points to advance in levels than a class with a moderate feature profile.  The pre-existing classes tend to demonstrate this logic; an Elf requires more experience than a magic-user to attain the same level.  This is, of course, a balancing factor; as starting characters, Elves are more 'able' than magic-users, but magic-users improve with greater rapidity.  In other words, the premise of Crabaugh's system is a 'trade-off' – power versus rate of improvement.

At the time, there were no specializations, backgrounds, skills, or kits; in terms of capability, there was very little that allowed individual characters to be distinctive.  Any given X level Dwarf was much the same as any other X level Dwarf; all X level thieves could be expected to do the same things with about the same amount of expertise.  Without significant alterations to the rules, Crabaugh provided a way for players to have unique characters – by having players design unique classes via a smörgåsbord of options.  Crabaugh wrote, “Every character in a game can, quite literally, be in a class by himself...”

There are a few details about Crabaugh's system that I didn't like.  For instance, when Crabaugh 'reconstructed' the standard classes with his system, the experience tables were not closely aligned with those in the rulebook.  I understood that an exact match was not feasible, but I felt that the system should be 'fine-tuned' to adhere as closely as practical to the existing tables.  Also, racial abilities were offered simply as Halfling, Dwarf, and Elf.  I felt that these abilities should be divided into their constituent parts.  What if I wanted an Elf's ability to detect secret doors, but didn't care about immunity to ghoul paralysis?  Crabaugh's 'cost' for infravision was the same as all Dwarf abilities including infravision.  Needless to say, my sense of fairness was offended.  As such, I crafted my own version of Crabaugh's system, presented here for your edification.

Some assumptions are in order.  First, every class has at least one characteristic (usually the prime requisite) that must have a minimum value of nine.  Second, there is no ceiling for non-human class experience levels.  Third, classes gain a hit die every level up through the ninth level; after which a fixed number of hit points are added per level.

Additionally, classes can gain abilities at certain levels.  (For instance, clerics gain spellcasting ability at second level and thieves can use magic user scrolls at tenth level.)  The 'cost' of the ability is not applied to the amount of experience needed to gain a level until the class receives the ability.  Logically, abilities should only improve but it's possible, for instance, to change to a lower hit die at a given level.  The only 'ability' that can't be changed is 'saving throw class'. 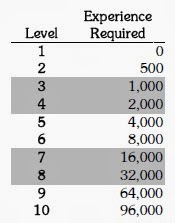 Table 1:  Baseline Experience
This is the standard experience table.  Each customized class will have a total multiplier that will be applied to the 'experience required' to gain a level.  For our purposes, the table goes through ninth level, but additional levels are easily extrapolated by adding 32,000 experience times the multiplier per level beyond that listed on the table. 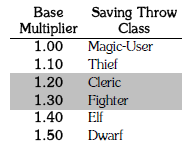 Table 3:  Hit Dice/Hit Points
As mentioned above, characters gain an additional hit die per level through ninth level, for each level beyond that a specific number of hit points are added.

Table 4:  Hit Progression
This refers to the number of experience levels required to advance one 'increment' on the Character Attacks table. 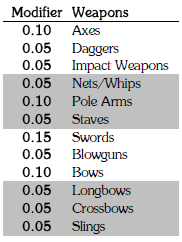 Table 6:  Weapons Allowed
This table incorporates a few weapons not included in Crabaugh's table.  The selection of 'Longbows' requires 'Bows' as a prerequisite.  The two selections are separate because there are undersized classes that can use bows but not longbows. 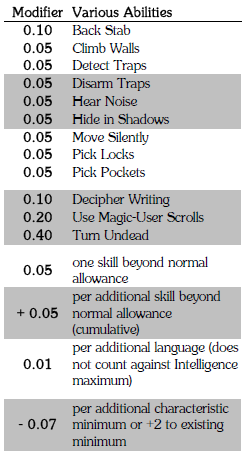 If skills are in use, additional skills may be obtained.  The first such skill has a modifier cost of 0.05; the second, 0.10; the third, 0.15, etc. Such skills could represent knowledge not commonly available and may only be learned by members of a particular race or guild.  Instead of skills, Crabaugh had a table listing the various NPC specialist 'abilities' (e.g.:  Animal Trainer, Engineer, Spy, Navigator, et al.).  He tried to base the 'costs' somewhat on the monthly salaries of the specialists.  I don't think Crabaugh went about this in the right way.  some specialist abilities are appropriate as skills (e.g., Armorer) while others might best be represented as classes in and of themselves (e.g., Spy). 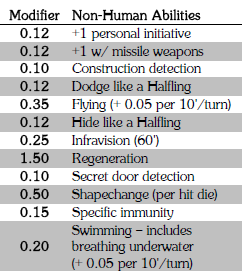 Table 8:  Non-Human Abilities
The table includes abilities described by Crabaugh (although not necessarily with the same costs) as well as particular abilities associated with Elves, Dwarves, and Halflings.  'Construction detection' refers to a Dwarf's ability to find new construction, slanting passages, shifting walls, etc. 'Dodge like a Halfling' is an Armor Class bonus of -2 when attacked by creatures larger than man-sized.  'Hide like a Halfling' refers to Halflings' aptitude at hiding.  'Regeneration' is the ability to recover one point of damage per turn (except when the damage is caused by fire).  'Secret door detection' is the ability of Elves to find hidden or secret doors.  'Shapechange', allows a character to shift between his or her 'normal' form and the form of a particular, predetermined non-magical animal.  The change requires one melee round to complete.  The animal form does not accumulate experience points; all experience earned goes to the normal form.  'Specific immunity' means the character is not susceptible to a particular condition, such as an Elf's immunity to ghoul paralysis. 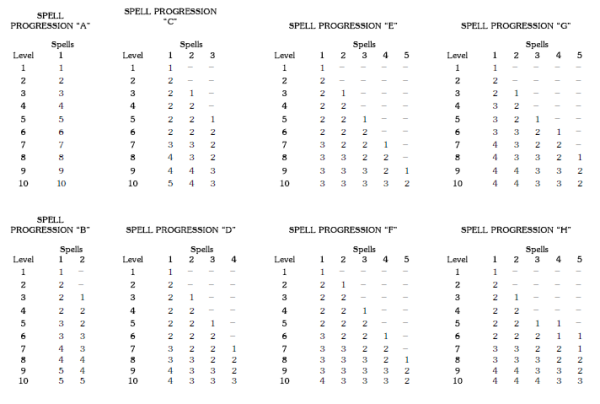