Disclaimer:  This is not a very exciting post (as opposed to my usual thrill-a-minute entries).  For the sake of thoroughness, I provide this information as an adjunct to last week's post.

Here are the standard classes as reconstructed using my derivative of Crabaugh's system for creating customized classes.

In Crabaugh's experience table, the number of points required to reach the next level doubles until level eight, after which the difference between level seven and level eight becomes the fixed amount of experience needed for all successive levels.  In my system, amounts double until level nine, then the difference between levels eight and nine becomes the standard.  In the real world (i.e., Expert Rules), experience progression is not so uniform.  Thus, at early levels for nearly all of the reconstructed classes, my system requires slightly less experience but ends up requiring slightly more experience at higher levels.

Spell progression is assessed as a single modifier in Crabaugh's system (as well as my derivative).  That same modifier is applied without regard to how many spells (or spell levels) are permitted for a given experience level.  Ideally, modifiers would increase as more spells are permitted and/or higher levels of spells become available.  For instance, why should a beginning character have to pay for (eventual) access to fifth level spells?  The 'cost' of fifth level access should be paid at the experience level when fifth level spells can actually be learned.

Neither 'reconstructed' cleric class approximates the 'genuine' cleric in terms of experience progression.  Usually, Crabaugh's version of a class requires less experience to advance than the original version; not so with the cleric.  Of course, Crabaugh's cleric can cast spells at first level, while I deferred that ability to second level – just as the rules have it.  The amount of experience necessary to reach second level in my version is almost the same as the original; however, to reach third level my version requires nearly twice the amount required by the original.  Crabaugh and I assume clerical magic is less 'valuable' than magic-user magic, but we would have to consider it to be nearly worthless for our systems to better approximate the original experience progression.  If we consider that (a.) clerical magic is not worthless and (b.) the 'customized' systems work fairly well for the other classes, then we must entertain the notion that the cleric – as presented in the rules – is overpowered. 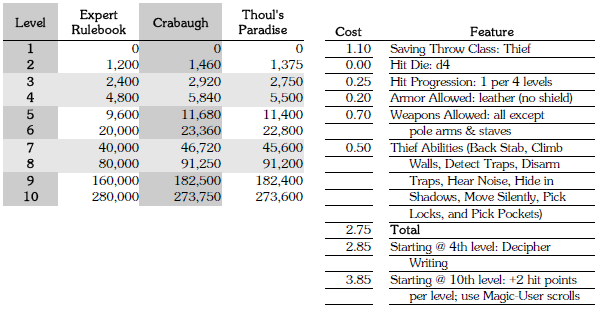 Other than the cleric, the thief is the only 'reconstructed' class where Crabaugh's version requires more experience to gain levels than the rulebook version. . .except for level ten.  For most classes, the experience point difference between levels eight and nine is the same as the difference between nine and ten.  The original thief class jumps from 80,000 to 120,000 (and 120,000 becomes the difference thereafter).  If we were to continue the experience table, we would see that the experience amounts for Crabaugh's thief once again become greater than the original at eleventh level (rulebook:  400,000; Crabaugh:  440,000).  Interestingly, my version aligns exactly with the original at twelfth level (520,000) and thereafter becomes greater.

With the Dwarf class, Crabaugh's required amounts of experience are consistently less than those shown in the rulebook; so are mine, until ninth level.  For the original Dwarf, the amount of experience points required for level nine is less than double that necessary for level eight.  (For the human classes, the level nine amount is always twice the level eight amount.)

Halflings can't use normal size armor but they can more easily fit into small spaces.  Crabaugh says, “As long as there is a balance between special advantages and special disadvantages, there's no need to figure a percentage cost for these.”  Although more detailed than Crabaugh's description, I have limited the 'features' of my version of the Halfling to those with effects specified in the rules.


To be continued
Posted by perdustin at 9:56 AM