Of StarLots and Shadow Stones 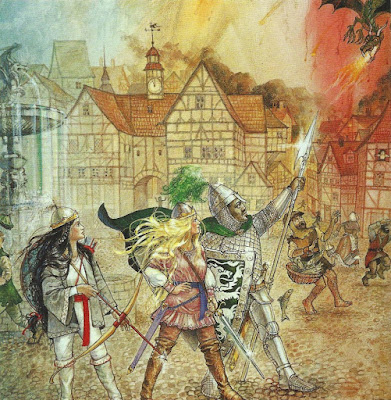 DragonRaid uses ten-sided and eight-sided dice, but refers to them as “StarLots” and “Shadow Stones,” respectively.  This is their story:


At the time of The Great Rescue, when the OverLord of Many Names returned from destruction to raise the protective Peaks of the New Beginning, viscious dragons of the Legion attempted to fly over the erupting, upheaving mountains.  Raging fire came from their terrible mouths.  But as they flew higher and the air grew colder, freezing the dragons' breath in mid-air, a remarkable thing happened.  The flames crystallized and plummeted to the bottom of the steep gorges.
Soon after the Great Rescue, the OverLord began to send His people, the TwiceBorn, into the Dragon Lands.  On the northern side of the Peaks of the New Beginning, LightRaiders found the wonderful crystals of many colors.  Each gem had ten sides, with a star encased in the center (recognized to be the OverLord's own birthmark).  Naming them StarLots, they collected them for the use of the TwiceBorn.
It did not take long to discover the power that lay within.  And since that time, the StarLots have been used to help LightRaiders survive in the Dragon Lands and raid the serpents' strongholds.
From time to time, StarLots have also come into the hands of dark creatures and dragon slaves.  But once touched by those with uncovered evil, the lovely StarLots turn into dark-colored, eightfaceted Shadow Stones – and the star within disappears.

The StarLots that come with the game are translucent. With regard to “the star encased in the center,” the rules state, “You will clearly see this star if you hold the StarLot up to the light and look through it end-to-end.”  Despite what the foregoing story suggests, StarLots and Shadow Stones do not have an in-game presence.  In terms of game mechanics, “The StarLot is the crystal used primarily by good forces to shape characters or decide outcomes; the Shadow Stone is used by evil forces for their random determinations.”  Incidentally, the Shadow Stone is also used for dragon slaves, humans who are the victims of evil.

Actually, use of the StarLot is not reserved exclusively for LightRaiders.  All weapons do 1 – 5 or 1 – 10 points of damage, regardless of who wields them.

By the way, no other mention is made of the OverLord's birthmark.

Posted by perdustin at 8:33 PM