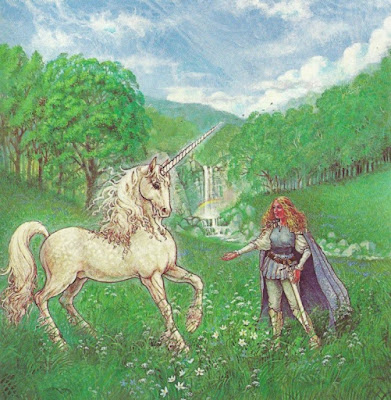 On Earth, we have Halloween.  In Talania – the setting of DragonRaid – there is the Night of the Scarlet Moon:


Every year the two light moons are eclipsed for five minutes by the Scarlet Moon, Moluno...Every baby born to a dragon slave during the eclipse is declared by the dragons to be a sorcerer.  The helpless infant is removed from its home and taken to the School of Witchcraft that lies deep in the Forest of Horrors.  There he is trained from his earliest hours in the art of sorcery, and his life is wholly given over to the dragons.

To the TwiceBorn, such a fate is horrific, but it is a cause for celebration in the Dragon Lands.  Rescue of the Sacred Scrolls, the second adventure for DragonRaid, begins on the Night of the Scarlet Moon; however, the adventure has very little to do with the events that occur on said night.  Yet perhaps we should look at the first adventure before discussing the second.

DragonRaid 's introductory adventure, The LightRaider Test, begins with the player characters having just graduated from DragonRaider Academy.  They come across a bottle containing a message written by none other than the OverLord of Many Names.  The message asks if the characters want to engage upon the LightRaider Test.  If they agree, the writing on the paper changes into a new message with instructions to proceed to the Dragon Lands.  There they meet a non-player LightRaider, a “man of another race.”  While on a mission, the LightRaider's partner, Gareth, was captured by goblins.  The OverLord is sending the LightRaider home.  It becomes the player characters' purpose to rescue Gareth.  Before parting, the LightRaider gives the PCs a pouch of “magic tablets,” most of which are supposed to “produce good results.”  So, DragonRaid explicitly endorses experimentation with strange pills.  Among the various effects, one tablet “makes character invisible until midnight” and two tablets “make a golden bow appear with 3 arrows (of silver shaft and golden points).”

Anyway, the adventure proceeds linearly through a series of scenes called 'sequences'.  There is a combination of combat, puzzle solving, role-playing, and the use of WordRunes.  As an introductory adventure, it does what it's supposed to do – give players (and the Adventure Master) hands-on experience with the essential processes of the game.  Eventually, the player characters rescue Gareth and learn the purpose of his failed mission.  Gareth and the other LightRaider were supposed to rescue another LightRaider, Zekion, and “some portions of the Sacred Scrolls.”  This is the set-up for the second adventure.

Interestingly, the adventure has a 'sequence' to be used should a player character die.  Such a character finds himself (or herself) “in a beautiful grove of trees.”  Not much happens.  Before the character enters the “golden castle” of the afterlife, he (or she) can try to hear the screaming of the damned from “a chasm that drops for an infinite distance.”

The DragonRaid adventures are more like 'choose your own adventure' books than those for traditional role playing games.  This is forgivable in an introductory scenario but is grossly unsophisticated otherwise.  Take for instance the beginning of Rescue of the Sacred Scrolls.  In the middle of the Night of the Scarlet Moon, each player character individually suffers a “compulsive feeling” to find one another.  Each PC separately finds “a parchment and a small leather bag” outside his or her home.  Then, according to the player briefing...


...you are distracted by a small group of people gathered around a lamppost at the end of the block.  They look familiar.  Yes, they are your friends!  You run down the street toward them and soon you are all together.

How can anyone see a small group before that group gathers?  I mean the first two characters have to meet before a 'group' forms.  Anyway, the characters learn that pieces of parchment and the bags (which contain money) were provided by the OverLord.  The pieces of parchment provide instructions for the characters' mission.  After being flown to the Dragon Lands by winged horses, the PCs encounter a talking stag whose name, “Horasis, comes from a Greek word meaning 'the act of seeing,' or 'a vision.'”  Horasis might as well wear a conductor's cap since his sole function is to prod the player characters along the designated course of the adventure.

Strangely, non player characters use game terminology in conversation.  A deer – one other than Horasis – relates to the PCs a message from the OverLord, “It pleases Him to reward each of you with 2 mu for Faithfulness.”  A “mu” is a maturity unit, which is what DragonRaid characters earn rather than experience.  Faithfulness, of course, is one of the DragonRaid Character Strengths.

Just as with The LightRaider Test, there is a 'sequence' for dead characters in Rescue of the Sacred Scrolls.  Yet characters who die in the second adventure have an entirely different experience than those who die in the introductory adventure.  After dying in Rescue of the Sacred Scrolls, a LightRaider 'wakes up' in a “small meadow or glade.”  This 'sequence' can result in different encounters depending upon the player's choices.  One encounter is with 'good' goblins from planet Arkor.  There are specific rules for role playing a conversation with these goblins:


Neither of you can role play anything negative: no fear, no accusations, no threats, no fighting, no disputes, etc.  You will most likely have to inform the player of this, but first let him try without your help.  If he does not understand, then there will be a slight shock when you inform him of the role play requirements.

Other afterlife encounters include a Q&A session with unicorns/angels or seeing “the throne of the High One and His OverLord of Many Names.”

Posted by perdustin at 5:38 PM

Email ThisBlogThis!Share to TwitterShare to FacebookShare to Pinterest
Labels: DragonRaid, It's all Greek to me, units