Earlier this month, Wendy's – the restaurant chain – released a tabletop role-playing game, Feast of Legends (hereinafter Feast).  It is available as a free PDF.  (A hardcopy version was available at the New York Comic Con.)  Now that I've time to digest it, I provide my thoughts in this post.

First and foremost – Why?  Evidently, “There are 4.7 million RPG fans across the U.S. and 13.8 million worldwide, according to Google Analytics data cited by Wendy's.”  This fact and the extent to which RPGs have encroached upon popular culture are apparently sufficient for an ad agency (or marketing consultant or whatever they call themselves nowadays) to convince Wendy's that this demographic is important enough to solicit.  According to Ad Age, advertising agency executives playing RPGs is a thing, so it was only a matter of time until something like this saw the light of day.

At 97 pages, Feast is the product of eight months of work.  Although infused with tongue-in-cheek humor, Feast is a professionally rendered product with a workable system influenced by Fifth Edition.  (No writing credit is given and there is no concession to the Open Gaming License.)  Aside from the PDF, the Feast home page has a thirty second YouTube video, a rudimentary die roller, and the requisite DoorDash link.  What about the droves of hamburger consumers who aren't familiar with RPGs?  The Feast page also has a “New to This?” link.  However, page two of the PDF does a better job of concisely describing how role-playing games work.  Game Master advice (on page 36) includes appropriate statements like “The most important part of being a GM is to make sure the group is having fun” and “This is simply your template to create the best game possible for the players.”

Feast presents itself as both a rulebook and campaign.  The rulebook is 19 pages and the campaign, “Rise from the Deep Freeze,” has 35 pages.  The remaining pages consist of the covers, introductory material, art, a map of the setting, a character sheet, and five pre-generated characters.  The setting is Beef's Keep...


...where the nations have been splintered over major disagreements in how to treat the realm’s people.  Creepingvale and the United Clown Nations have led their people into a collective darkness known as The Deep Freeze.  While the world currently feels like a cold and desolate place, you reside in the one nation that remains a true beacon of hope: Freshtovia.
Freshtovia is known for its lush fields; signature dishes; and redheaded queen, Queen Wendy.  As queen of Freshtovia, Wendy has clapped back at all attacks on her borders.  She is strong and has maintained her nation’s integrity despite the growing pressure of the other nations.

The marketing message is obvious; Wendy's serves only wholesome, fresh beef while the competitors foist ungodly, frozen beef upon their unsuspecting customers.

The basic mechanic of the system is to obtain a high result on a d20 roll.  A roll of 1 is considered “a big oops.”  A roll of 20 causes a character to enter “FEAST MODE,” the best possible outcome.  In combat, this means maximum damage and an additional roll with advantage.  Instead of short rests and long rests, there are snacks and meals.  Feast characters have “five main stats” (Strength, Intelligence, Charm, Arcana, and Grace).  For the most part, they are self-explanatory, but Strength represents both “physical and mental strength.”  To determine the score for a stat, 4d4 are rolled.  (This is supposed to reflect Wendy's “4 for $4” promotion.)  All five scores are  determined before assigning them.  Even an average roll (i.e., 10) offers a +1 bonus.  Starting Hit Points are also determined by rolling 4d4. 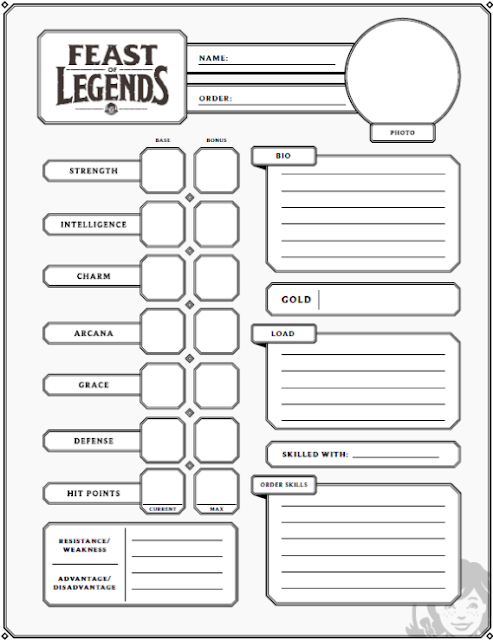 Instead of classes, there are 14 Orders – each based on one of Wendy's offerings (e.g., Order of the French Fries, Order of the Baconator, Order of the Asiago Ranch Chicken Club, et al.).  Orders provide:  Base Defense (like ascending Armor Class), Additional HP (if any), Other Bonuses (to stats), Skilled With (armor and weapons the character can use – characters receive a +1 on attacks with weapons with which they are skilled), and Cannot Use (prohibited armor and weapons).  Orders also provide one or more skills per level.  For example, 'Two Beef Patties' is a Level 1 skill of the Order of the Double Stack (“You can dually wield any weapons that don’t require two hands”).

Characters start with ten gold pieces.  There is no other coin denomination, which means that a nail costs 1 gold – the same as a blanket, a weaponized spoon, or ten feet of rope.  Characters “also start with a basic outfit, which can include clothing or armor that matches your character’s skills...a basic weapon or two if the Order you choose permits it...other basic tools or items that make sense for your character to carry...” and possibly a shield.  Examples of equipment that can be purchased include ukelele (7g), pigtail wig (4g), and strawberry lemonade (10g) which heals 1d12 hit points.

One important aspect of Feast is that the behavior of a player in real life can affect game mechanics that apply to his or her character.  Eating various Wendy's items will grant bonuses “for the entire duration of play for the day.”  These are called “buffs.”  As an example, eating Wendy's french fries confers “+1 to your Intelligence stat.”  By eating an item that matches the character's Order, the character will “gain advantage on all attack rolls for the day.”  This seems overpowered.  There are also “debuffs.”  A player eating food other than Wendy's during gameplay may detrimentally affect a character for the duration of the session.  A sub sandwich causes a -2 modifier to all Strength rolls (including attack rolls).  Consuming tacos inflicts a -2 modifier to all Arcana rolls.

I won't disclose spoilers for the multi-part adventure, but it includes puzzles and various activities.  We learn, “Each square on the table represents 5 feet of movement,” but no scale is provided for the maps.  Characters can encounter people with names like Chilbo Bacons and Frostina LaSpoon.  At various parts of the adventure, player characters gain a level.  Regardless of Order, each character gains 2d4 + 4 hit points upon reaching a new level. The adventure takes the characters to fifth level.  Since the Order descriptions only lists skills through fifth level, there is no means of improvement for characters once they finish the adventure.  Yet there is a larger world beyond the adventure; part six of the campaign is titled “Continued Adventuring.”  It describes additional locations and activities.  Page 83 provides a 'Karaoke Charm Rolls' table.  Characters can obtain exotic steeds at the Spicy Stables.  The listed attack for camels is 'spit' (1d6 damage).  The 3.5 SRD description of camels does not mention spitting; Feast is therefore superior in at least one aspect.  (1d6 damage might seem to be excessive, but Feast characters do not perish upon depleting their hit points, instead they “pass out from hunger.”)

Players are encouraged to describe their characters:


Writing down a physical description of your character will help you and your party members be fully immersed in the experience.  Use your class [sic] to help inform the look and feel of the character you want to create.
Oh, and don’t forget to give your new hero a super dope name.  People are going to be calling you that for the entire game, after all.

Yet the character sheet does not have a place to write such a description, although it has sections for Photo and Bio.

Presenting a free PDF is well and good, but if Wendy's wants me ordering their food, they need to provide premiums.  People in the YouTube comments are clamoring for figures.  I have another idea.  Page 7 has a representation of a d20 with a Wendy's cameo depicted on the '20' side.

This should be a real thing.  They can even call it a Wend20.

Posted by perdustin at 6:22 PM

Email ThisBlogThis!Share to TwitterShare to FacebookShare to Pinterest
Labels: 5E, character sheet, Lopez, See what I did there?