'Shield of Faith' and 'Weapon Abilities' are derived from 'Character Strengths' (briefly touched upon here). The 'Shield of Faith' is merely one article of the 'Armor of God':
In calculating a LightRaider's combat skills, there is a distinct formula for each weapon.  For instance, a LightRaider's skill with swords is determined by finding the sum of Courage, Endurance, Solo Battle, and Agility, then dividing by four.

Courage and Endurance are Character Abilities that are derived from Character Strengths.  'Courage' is the average of Love, Joy, Goodness, Faithfulness, and Self-Control.  To calculate 'Endurance', one must first add together Joy, Peace, Faithfulness, twice Patience, and twice Self-Control; then, divide the total by seven.  Incidentally, “Endurance (EN) is the ability to accept physical punishment in doing strenuous activities over a period of time, or to endure hardships such as lack of sleep, food and water.”

'Solo Battle' is an interesting ability:


This is not a weapon, but an ability that is used whenever a LightRaider must face an enemy without the company of other fighting members of the TwiceBorn.  Reflects the psychological impact of being alone in battle.

Solo Battle is determined by adding twice Courage to Peace and Endurance; then dividing by four.  So, in terms of percentages, a LightRaider's skill in wielding a sword consists of the following abilities: 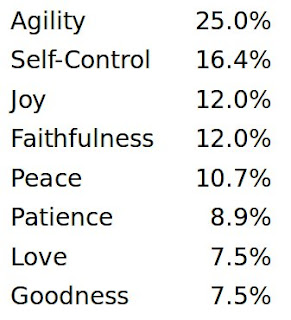 Why should Peace account for more skill with a sword than Love?  Tying Christian values to weapon skills can be nothing but an arbitrary process.  Regardless, including Solo Battle in the formula for the sword (or any) weapon ability is peculiar.  Given its description, Solo Battle is intended to be a penalty imposed upon those who stray from the herd.  As a penalty, I would just have the player roll a Shadow Stone instead of a StarLot.  Formulas for some other weapon abilities are:
Damage is subtracted from Physical Vitality, which is half the sum of all 'Character Strengths'.  There are “five degrees of injury.”  Even the slightest amount of damage means the character is wounded and must succeed at a Difficulty Level 3 Endurance check in order to travel.  Characters with only six to ten points of Physical Vitality remaining are 'seriously wounded' and the Endurance check to travel is at Difficulty Level 8.  With five or less points of Physical Vitality, the character is 'critically wounded' and cannot travel or fight.  Characters with only one to three points of Physical Vitality are unconscious and when Physical Vitality is reduced to zero, the character is dead.

Aside from 'normal' combat, DragonRaid offers two types of optional 'advanced' combat.  'Half-swing' combat is just like normal combat, but only half the usual amount of damage is inflicted.  In 'critical swing' combat, there is a ten percent chance of any successful strike being a critical hit.  If a strike is determined to be a critical hit, the Critical Hit Chart (reproduced below) is consulted. 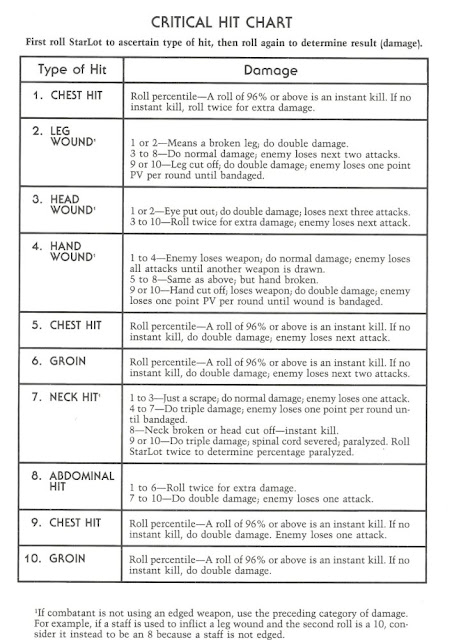 Posted by perdustin at 6:15 PM