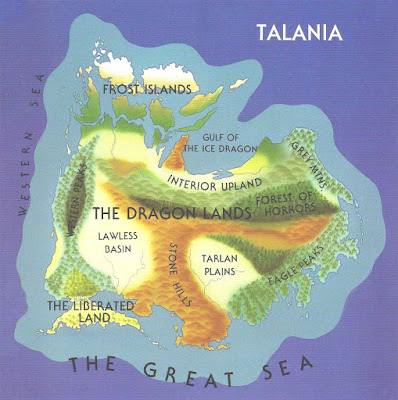 On the world of EdenAgain, there are five known continents; three of them are inhabitable.  The largest of these, Talania, is where the action of DragonRaid takes place.  Of the other continents, we know nothing.  According to the back cover of the LightRaider Handbook, Talania “lies in the northern hemisphere, between latitude 65°N and 27°N.”  In terms of scale, we are told that the range of the Western Peaks is over “1200 miles long.”

In the south-west of Talania, the 'Liberated Land' is situated.  As indicated in a previous post, the Liberated Land is the refuge of the TwiceBorn – the servants of the OverLord.  In fact, the OverLord adjusted Talania's geography for the purpose of protecting the Liberated Land from the perfidy of dragonkind.  Specifically, “the continent erupted with a a mighty roar into a mass of billowing, crumbling earth that rose higher and higher.”  Thus The Peaks of the New Beginning were generated, separating the Liberated Land from the Dragon Lands.  The peaks reach “altitudes of over 26,000 feet...”  On either end of the peaks, “On the west and east, the range is framed by cliffs that plunge to the sea in shear, breathtaking drops.”

From the sea, the Liberated Land is protected by the Mist Barrier:


This unusual bank of steam is about five miles wide.  It extends to the southwest through the Gulf of the Stars and into the Western Sea for a distance of some 1000 miles.  It also stretches southeast through the Misty Sea, Sea Hag Straights and Mandel Bay to end 1000 miles in that direction.  It is caused by the heat of a volcanic fissure on the sea bed, opened and constantly maintained by the OverLord.  The fierce heat of the lava turns the water into clouds of steam; violent “seaquakes” and occasional volcanic eruptions reach the surface of the water.  This, combined with the continual boiling of the sea, makes this barrier very hazardous for humans to cross.  Dragons cannot penetrate it at all – their fires would instantly be extinguished and they would die ingloriously.

LightRaiders infiltrate the Dragon Lands by means of the Passage Lakes.  A portion of the introductory adventure describes this in the OverLord's Own Words:


...you will find a lake called Mt. Challenge. Once you are ankle deep in this Passage Lake, you come out of a Hollow-Tree in the northern part of Highland Forest.  As you know, this is the way I have decided to bring My LightRaiders into the dangerous Land of the Dragons.

LightRaiders have an incomplete knowledge of the Dragon Lands (even though the TwiceBorn originated there).  Included among the features of the Dragon Lands are:
In closing, any fantasy role-playing campaign worth talking about has a wacky numismatics system and DragonRaid does not disappoint. 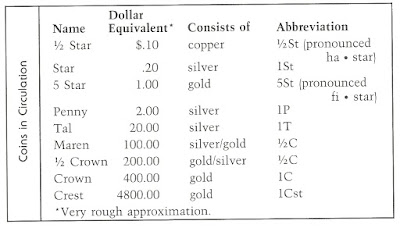 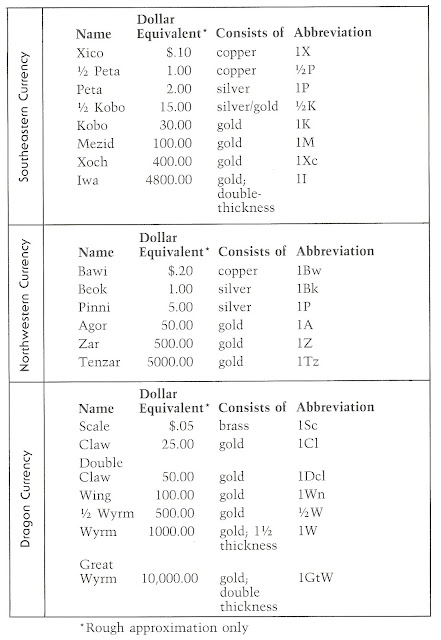 Posted by perdustin at 2:26 PM