The DragonRaid New Player Briefing defines dark creatures as “Non-spiritual beings that follow the dark strategies of the dragons.”  Additionally, “They were exiled to the world of EdenAgain by their societies on other planets.”  Many of the dark creatures are indistinguishable from standard fantasy 'opponent' races, except that they came from technologically advanced civilizations.  Still, on EdenAgain they live a medieval existence, doubtless due to the mechanizations of the insidious dragons.  Here are stories of some of the dark creatures.

According to the LightRaider Handbook, “Greedoes were exiled recently from the planet Werj.”  On that planet, “bartering replaces buying and selling.”  On Werj:


...green greedoes secretly invented a way to better their lot.  They called their new methods “bargaining” rather than “bartering,” and they began to stretch the truth when they negotiated.  Trusting that all was done in honesty, greedoes of other colors had no idea that they were being cheated.

The Overlord of Many Names did not like this because, “When He created the greedoes on the planet Werj, He intended them to be fair and to use their superior knowledge of business practices to watch out for those of lesser ability.”  Then perhaps 'greedo' wasn't the best name He could have given them.  Anyway, when the other greedoes caught on to the perfidy of their verdant brethren, they exiled the green greedoes to EdenAgain.  Specifically, they were sent away in “properly equipped spaceships...that were programmed to self-destruct one hour after landing on EdenAgain.”  We can assume that the other races of dark creatures were sent to EdenAgain in a similar fashion since that would explain the lack of spaceships and other advanced technology in the Dragon Lands.

Although, the greedoes' “hands and feet are equipped with razor-sharp claws,” the main threat they pose to player characters is the Unearned Wealth Enchantment.  Said enchantment “causes you to cheat others and thereby lose your Joy.” 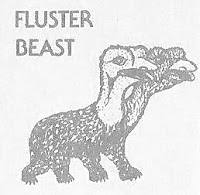 Occasionally, the twelve intelligent races of the planet Kumoz send 'mutations' to EdenAgain; specifically, the results of “when unholy mating occurred between bear-like animals and ostrich-like birds.”  These dark creatures are called fluster beasts.  A fluster beast...


...has the body of a small bear, but has two ostrich-like heads.  The body is covered with feathers instead of hair.  This beast has the claws of a bear, which are its main method of attack and defense.  Also, fluster beasts can attack with their two heads by pecking, even at two different enemies simultaneously.

The two heads constantly disagree with one another.  The spell fluster beasts cast, “the Double-Minded Enchantment...can affect any Character Strength, depending on the particular confusion generated...”

On the planet Armech, selfoes – gray humanoids with pointed ears – serve the OverLord of Many Names.  However, some “degenerate selfoes began to do good things for people, but not for the glory of the OverLord.”  Apparently, performing good deeds is 'degenerate' behavior if done for any reason other than to promote the OverLord's glory.


Eventually, the citizenry became angry with the selfoe do-gooders, being jealous for the OverLord of Many Names.  They knew His power and goodness cured the sin contamination that was preventing [the degenerate] selfoes from having a pure heart.  So angered did they become that they exiled the self-focused selfoes to EdenAgain.

Get it?  'Selfoes' are 'self' focused.  On EdenAgain, selfoes are nomads “commissioned by the evil dragons to draw people's minds away from the OverLord of Many Names.”  Selfoes expound “that anyone may know the OverLord by living a life full of good deeds” and “that sin and dragon slavery are imaginary.” 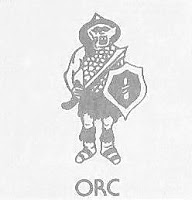 Apparently, these dark creatures are called 'mound' orcs because “LightRaiders who travel through their territory have reported great stacks of bones, a status symbol of how much sorrow and suffering they have caused to others.”  We are informed that mound orcs, natives of the planet Uory, “turned evil early in their history and were exiled to EdenAgain before most other dark creatures.”  This suggests that orcs were not originally evil and that most of the orcs on Uory are not evil (or else the evil orcs could not have been exiled).  Perhaps mound orcs possess the capacity for good?  Perhaps they are deserving of the Christian considerations of compassion and forgiveness?  Well, no.  The OverLord (a.k.a. Jesus) wants you to kill orcs.


The only good orc is a dead orc.  LightRaiders are to destroy these creatures whenever they come upon them.  Chivalry is of little value.  They can be killed...even when they are sleeping.  This is because they have most likely caused tremendous pain and suffering for others...and will cause more if you permit them to live.

Orcs have leather-like, gray-brown skin; also, “Large yellow, almond shaped eyes and big pointed ears.”  When you slit the throats of sleeping people who have “most likely” caused pain and suffering, I guess it's easier when they have different skin coloration and facial features.  Jesus must love murderhoboes.

Posted by perdustin at 3:26 PM