The Dietary Habits of Orcs


There was once a time when Mayfair Games published role-playing game material.  In fact, in some of their advertisements, they used the slogan, “We're the other company!”  (Other than TSR, that is.)  Among their efforts was a series of sourcebooks called 'Role Aids'.  One of the earlier entries was Dark Folk (1983), including sections for gnolls, goblins, kobolds, orcs, and trolls.  Each section contained essays and information about the particular race as well as an adventure featuring said race.  Several writers contributed to the book, but the only cover credit was:


With ORCS by ROBERT LYNN ASPRIN

Asprin, as the creator of Thieves' World, was a major selling point at the time.  However, Asprin did not write the entire section about orcs, but only a patronizing article which came to about one full page.  Here are some of his speculations regarding orcs: 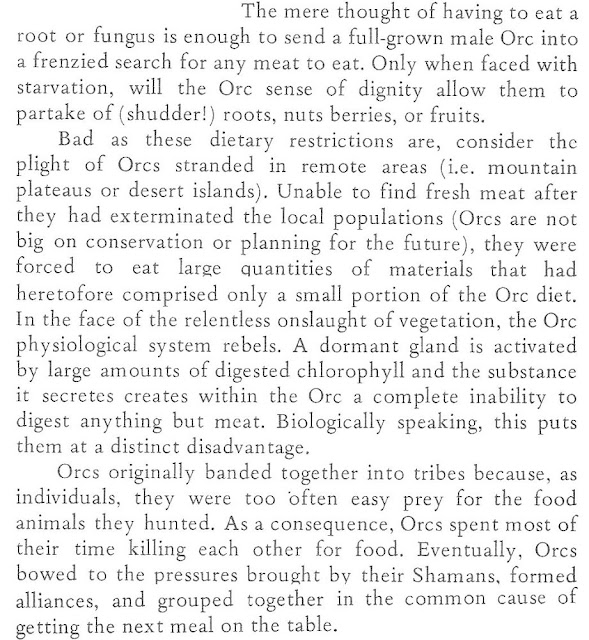 Orcish alliances prevented orcs from killing one another, which caused a population explosion and an attendant depletion of resources.  The orcs' “solution” to this state of affairs was cannibalism. 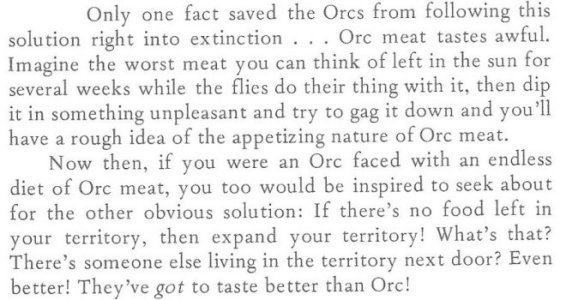 While not inclined to eat plants, orcs have a use for fungi – or at least a particular fungus.  According to another part of the orc section (i.e., a part not written by Asprin):


Their favorite drink is fermented from a fungus that grows underground in abundance.  Flavored with blood, this beverage, called Groog, is nauseating to all other races, and has been known to incapacitate a non-Orc imbiber for 1-4 days.

Posted by perdustin at 1:46 PM